At the beginning of the year the upward trend in Bitcoin it was accompanied by the large investments of the institutional investors, hedge funds and even frontline companies. After the sharp correction and trading halfway to $65,000, the trend still continues bassistaccording to Lyllah Ledesma on Coindesk.

“Now, as bitcoin trades near half of the all-time high of nearly $65,000 reached in April, things are starting to look slightly different: despite what looks like a sell-off in the cryptocurrency, the data shows that institutions have shown a reluctance to take advantage of the deal, seemingly shaken by the same concerns that have pushed prices down.” , indicates Ledesma.

The addresses of “whales” of Bitcoin, the ones that have 1000 BTC or more, fell to around 2150 in May from nearly 2500 in February, according to blockchain analytics firm Coin Metrics. Since then, the number has languished around that lower level.

Glassnode, another blockchain analytics firm, noted in a report Monday that a stalemate in the balance of bitcoins held on cryptocurrency exchange Coinbase offers another view of the same dynamic.

CoinDesk reported that open positions in bitcoin futures had fallen by a 59% from a high on April 13, an indication that institutional investors are being cautious. 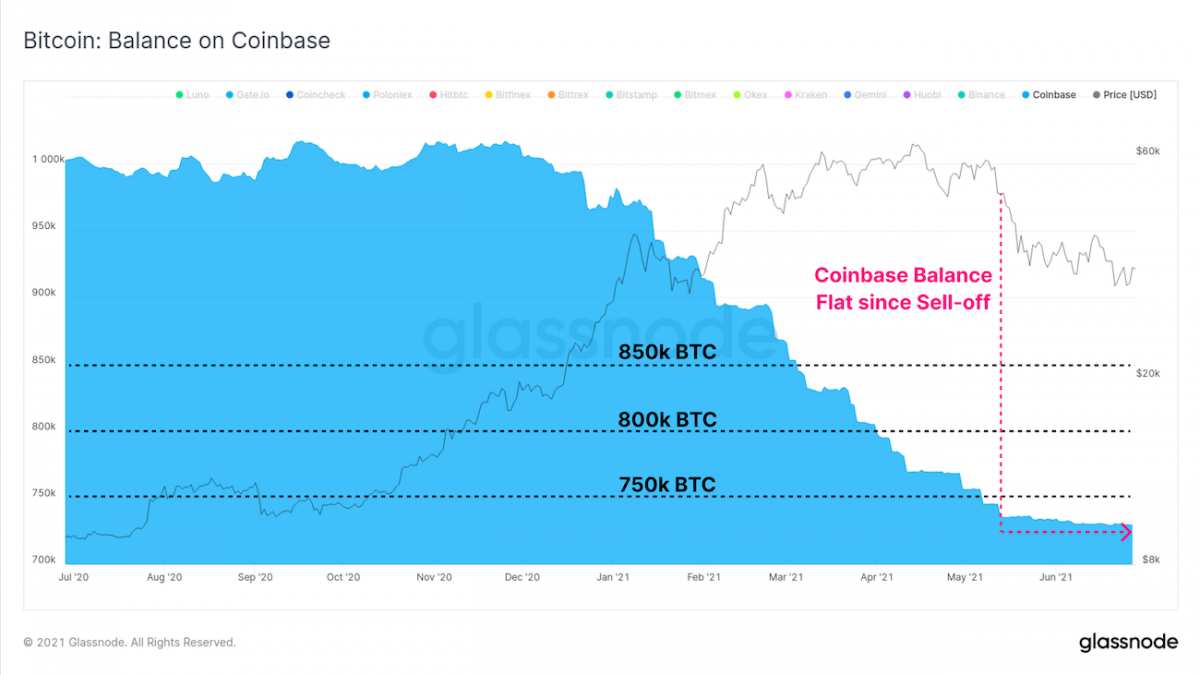 The latest data could show why bitcoin has stagnated between $30,000 and $40,000 over the past month, after prices rose over the past year, in part due to the expectation that a wave of new buyers would arrive.

However, signs continue to mount that institutional investors are preparing to attack: companies such as BlackRock, Goldman Sachs, Morgan Stanley and JPMorgan are on the list of traditional financial institutions that have established bitcoin funds and services in recent months or they have acknowledged considering a move to cryptocurrency. On Tuesday, the financial services firm TP ICAP announced that it is launching a crypto trading platform alongside financial heavyweights Fidelity Investments and Standard Chartered.


“But lingering concerns about the potential environmental damage of bitcoin, a regulatory crackdown on bitcoin trading and mining in China, and, more recently, a decline in the computational power of the underlying blockchain network appear to have caused large investors to pause,” Ledesma notes.

Another concern is the possibility that the Federal Reserve of the United States harden its monetary policy in an effort to combat inflation. The prospect of a rapid rise in consumer prices after trillions of dollars of central bank stimulus had been a key source of bitcoin demand, because cryptocurrency, with its limits coded in new issues, has been presented as a constant bulwark against the devaluation of the dollar. .

Microstrategy and its treasury dollarized in BTC

At the beginning of the year, MicroStrategy was the first U.S. corporation to invest its dollarized treasury in bitcoin, and has since been considered the executive director Michael Saylor as an influential presence that emerged from corporate America among the bitcoin community.

This investment sparked speculation that other large companies might follow suit. Conjecture at the time pointed to Twitter, Tesla, Apple, Berkshire Hathaway from Warren Buffett and even the burger chain Wendy’s.

The firm has continued to buy, saying earlier this month that it is borrowing $500 million to buy more bitcoins. And some small businesses are still “active” in moving towards bitcoin, J said.ohn Todaro, vice president of cryptoassets and blockchain research at Needham & Co.