On May 27, a prequel to the Disney story about the long-suffering Dalmatians – the crime comedy “Cruella”, was released in the Ukrainian box office, thanks to which the viewer finally learned how the cold-blooded villain came to such a life. UNIAN has already watched the novelty from director Craig Gillespie with the unsurpassed Emma Stone in the title role, and is now ready to share his impressions in hot pursuit.

Most of us in the 90s of the last century, if we have not watched the Disney films “101 Dalmatians” and “102 Dalmatians” with Glenn Close, then certainly did not miss the cartoon of the same name. But the main thing that we remember is that the cruel rich woman Cruella De Ville, for some unknown reason, wants to make herself a fur coat from hundreds of cute Dalmatian puppies. And now, after a couple of decades, Disney still decided to fill this motivational gap. And it turned out quite well (attention, there may be spoilers ahead).

The main thing for which Western critics praise Cruellawhich has already received generally positive reviews for its direction, acting, costumes and music. In a word, for everything that was originally expected from the film. And we cannot but agree with them. Now let’s talk about everything in order.

The film was directed by an Australian Craig Gillespie Is a real shark in the world of advertising, who has shot a huge number of videos for the best companies in the world, from automobile concerns and candy manufacturers to fashion brands and tech giants. And he was always praised for his sense of style and subtle black humor. He managed to transfer all this to the “big screen” without turning full-length films into just long commercials. 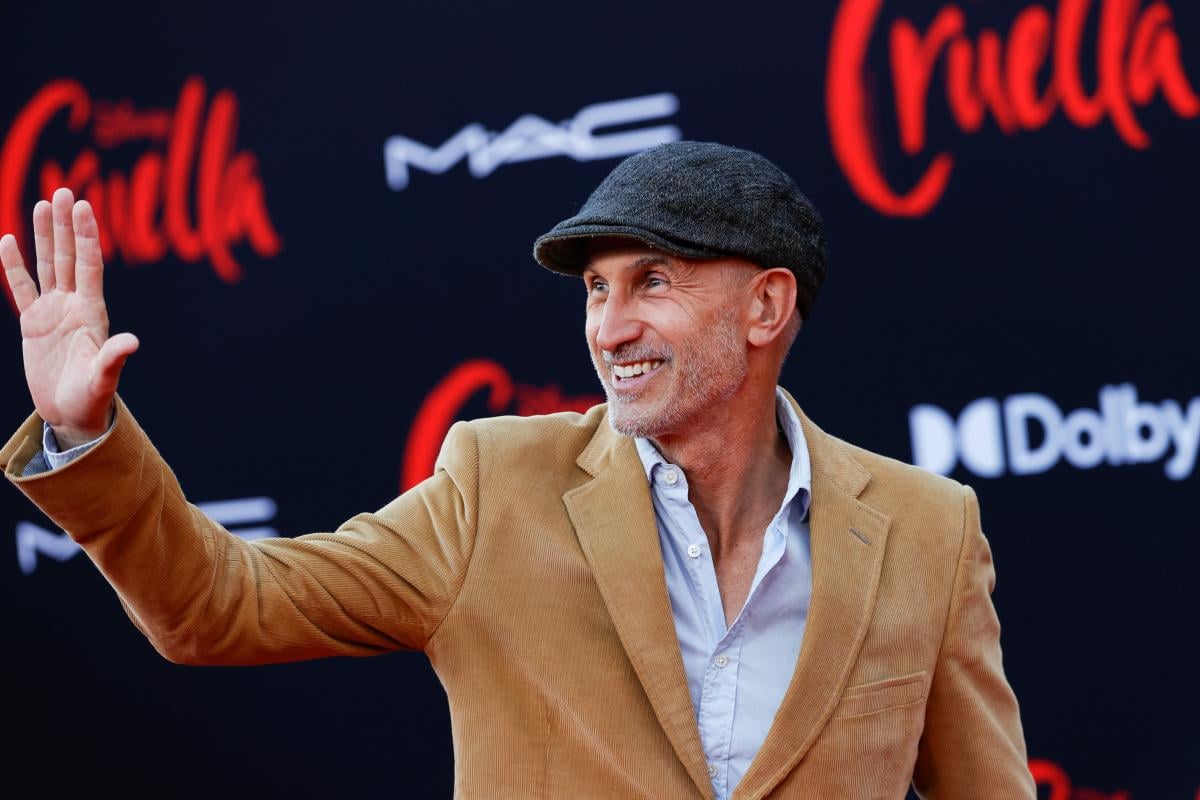 Since 2007, Gillespie has directed eight films, including Cruella, as well as several episodes of the series. And, in fact, none of his work can be called a failure. He made his debut in the comedy “Mr. Woodstock” with Billy Bob Thornton and Susan Sarandon, followed by the dramedy “Lars and the Real Girl” with Ryan Gosling. And then there was “Night of Fear” with Colin Farrell, Anton Yelchin and David Tennant. Well, the crown of Gillespie’s career at the moment is considered to be his previous film – biopic “I, Tonya” with Margot Robbie and Sebastian Stan about the controversial figure skater Tone Harding, which has received critical and audiences acclaim, as well as an armful of prestigious awards and nominations, including an Oscar and a Golden Globe.

In general, as you understand, in the case of Cruella, the director was also not expected to be an outright failure. And, in principle, he justified all the expectations placed on him. The film turned out to be holistic, stylish, with a healthy sense of humor (which is now rare in American mainstream cinema) and not protracted, despite the considerable timing. Yes, at some points we can say that something was too simplistic, naive and predictable. But wait a minute, this is Disney! 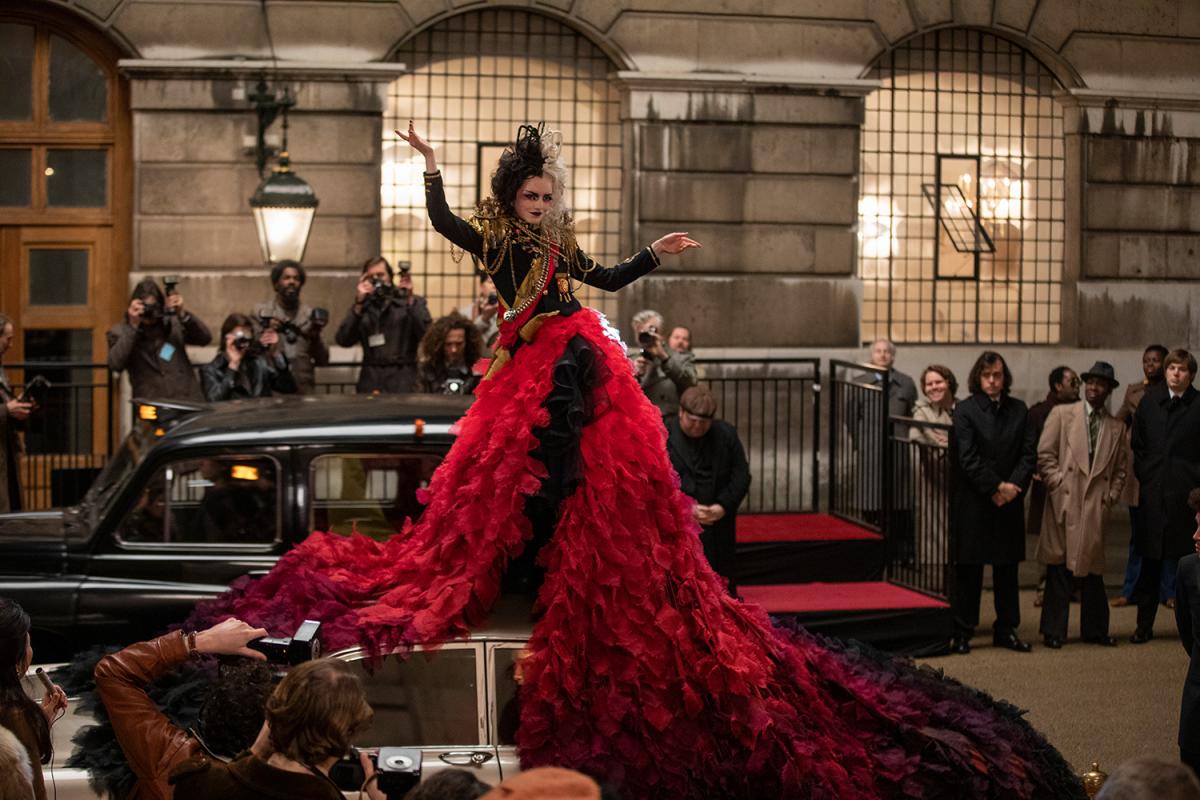 Now let’s talk about the Cruella caste. From the very first feature-length film, Gillespie managed to get top-level actors and actresses for the main roles, while choosing memorable images for them, often requiring serious reincarnation. Here, too, the leading roles went to two first-class actresses – the winners of the Oscars, Golden Globes and other prestigious awards Emma Stone and Emma Thompson. And they coped with their task brilliantly.

One side – Emma Stone, whose Cruella turned out to be not just a sinister psychopath, but also a fragile girl, initially honestly trying to follow her dream, to which nothing human is alien. Sometimes she finds herself on the verge of insanity, and sometimes she makes a difficult moral choice in favor of good. You even begin to sympathize with her, and to some extent you understand where this dislike for the Dalmatians came from. At the same time, the actress was able to masterfully convey two images of the heroine – both externally and in spirit. 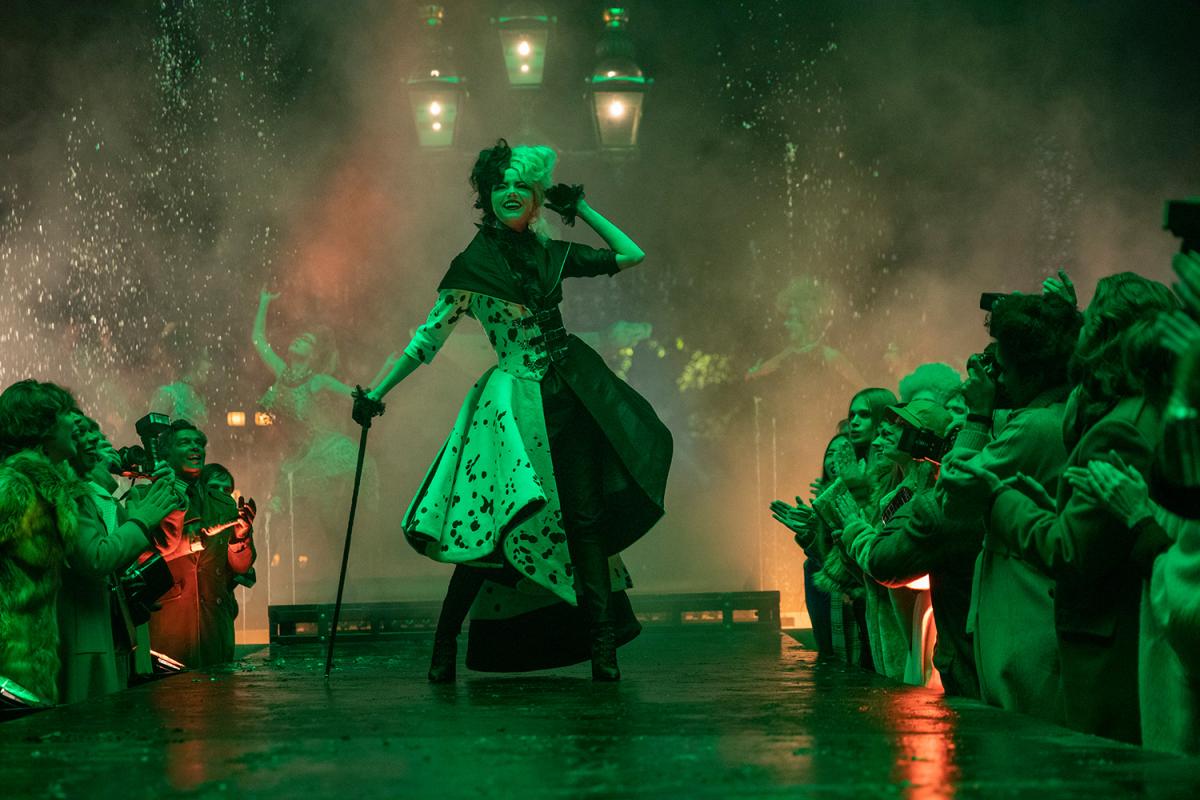 And Emma Stone was amazingly able to convey the rebellious spirit of 70s London, of course, not without the help of costume designers and sound engineers.

On the other hand – the owner of a posh fashion house, a cold bitch Baroness performed by Emma Thompsonwho became the true villain in Cruella. She does not reckon with anyone and is ready to do anything for the sake of recognition and money, while not disdaining to appropriate other people’s ideas. For her, even murder is a piece of cake, even when it comes to her own child. 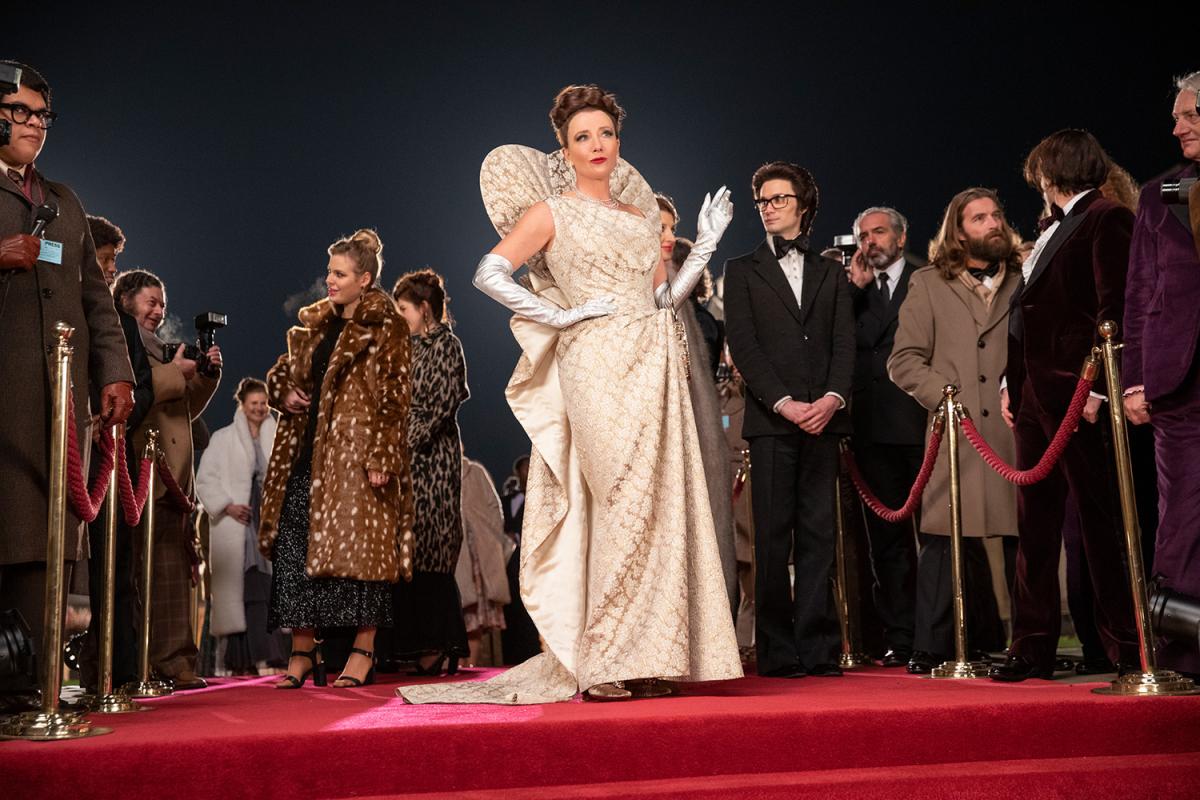 The Baroness performed by Emma Thompson / still from the movie “Cruella”

Another character in the film that is worth highlighting is one of Cruella’s henchmen, the fat thief Horace performed by Paul Walter Hauser, migrated into the film from the director’s previous work “I, Tonya”. What is only the stage at the final ball!

In general, if you remember, in previous versions of the “Dalmatians” two thieves – Horace and Jasper – were extremely nasty types. Here it was decided to make them more positive characters, such noble criminals with moral principles, who are ready for anything for the sake of loved ones. From childhood, Horace and Jasper (his role went to Joel Fry) replaced young Estella’s family, long before she turned into Cruella, and they are still willing to support her to this day. And in this exaggerated battle of two powerful bitchy women, oddly enough, it was these two who became real rays of common sense and goodness. 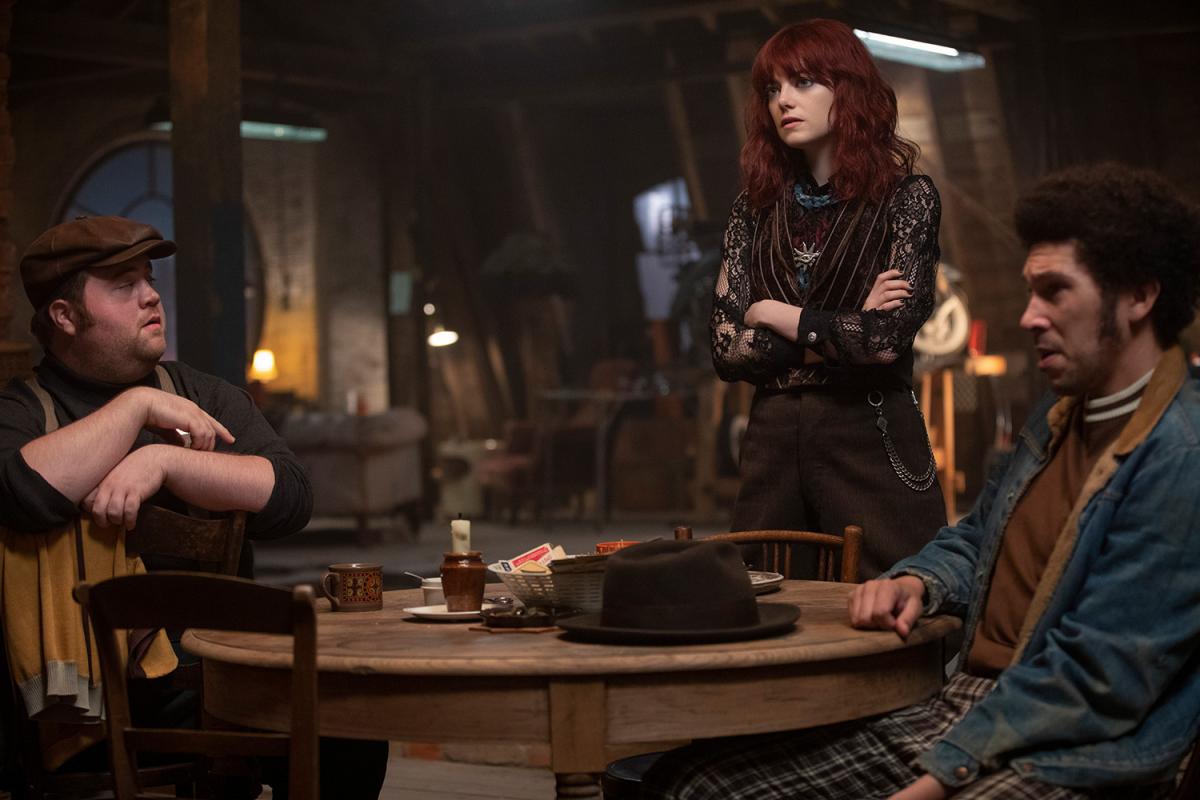 I would like to pay special attention to the four-legged characters, of which there are several in the film, and these are not only Dalmatians. The latter here, on the contrary, are depicted as rather vicious animals, however, they are not particularly guilty in this – what kind of owners, such and pets, as they say. But our heroes – Estella, Horace and Jasper – have two four-legged assistants, funny song Buddy and Vink. They clearly added mimicry to the entire film.

Yes, an observant viewer could have noticed that in some places the dogs look too computer-aided. But we would venture to suggest that the filmmakers were simply trying to follow the principles of respect for animals, in the spirit of “it is better to finish painting than to train.” 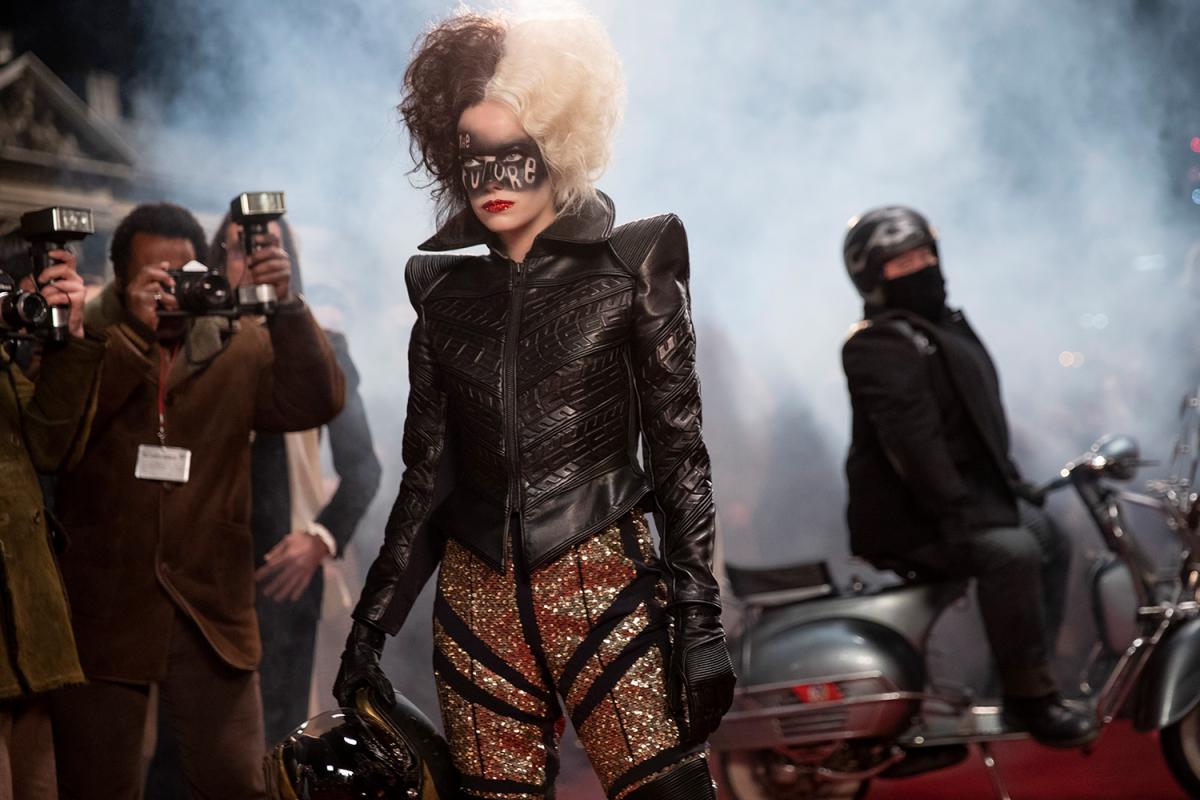 And last but not least, the audiovisual part. Perhaps this is perhaps the strongest part of “Cruella”, and costume designers in general can safely submit an “Oscar” without discussion. Each outfit of the main characters, as well as things from the collections of the Baroness and Cruella, are real works of art. 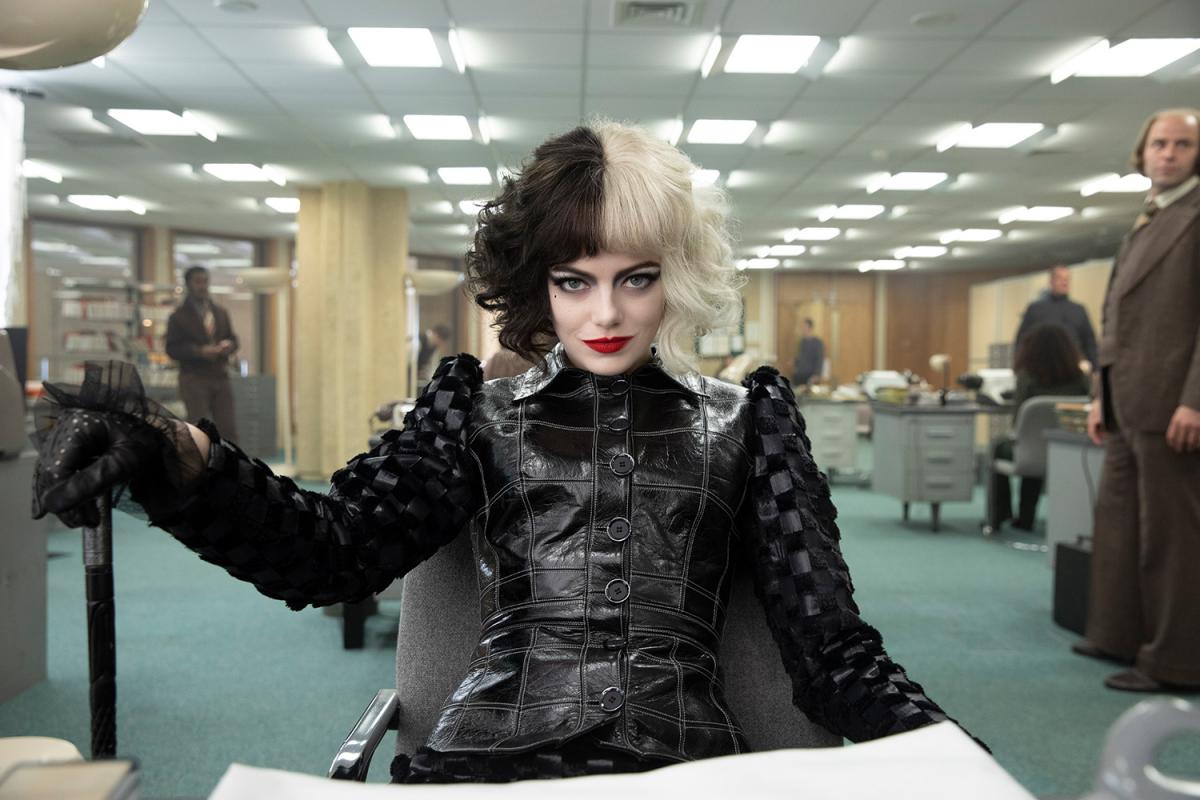 Decorations and musical accompaniment – to match them. The Doors, Queen, The Clash, Blondie, Bee Gees, Electric Light OrchestraІ, Ike & Tina Turner – all very accurately convey the rebellious atmosphere of the 70s. Well, the title song was specially written for the film Call Me Cruella from the British performer Florence and the Machine.

In general, “Cruella” can be safely called a 2.5-hour punk-chic aesthetic pleasure.

By the way, the merits of Gillespie himself in this matter should not be belittled. Nevertheless, he began his career as an illustrator and graphic designer, and it was his sense of style that became one of his main “business cards”, which is clearly noticeable in his previous works.

Our verdict: On “Cruella” you can safely go to the cinema with the whole family just for the sake of one picture and sound. But this is far from the only strong part of the film. At the same time, almost 2.5 hours of screen time fly by literally in one breath.

You can read about other news of the week in our traditional review.

If you notice an error, select it with the mouse and press Ctrl + Enter