Sometimes it is useful to have multifunctional software on your smartphone, created on the principle of “all in one” and capable of solving various problems. Such software systems are convenient for their versatility, practical to use, always at hand, replace many other products and, as a result, save the memory of a mobile device. There are more than enough pluses to take a closer look at such applications. 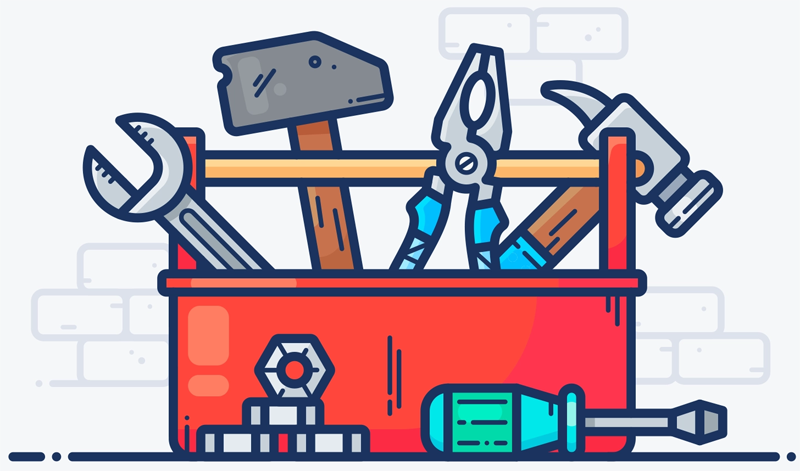 The proprietary Yandex application, in addition to tight integration with the company’s online services, offers a host of other interesting functions. Among them: voice assistant “Alice”, smart camera (real-time recognizes objects, tells what he sees and advises where to buy it, as well as scans documents and translates inscriptions), automatic number identifier, transport map, QR scanner -codes, messenger, built-in browser and e-book reader. And also – search by voice and by photo, a detailed weather forecast, the main news of the day, a TV program by channels and much more. Owners of smart home devices can use the program to remotely control smart appliances from various manufacturers.

An interesting feature of the app is the offline search support. The program preloads search results for the most popular queries and then shows them to the user when the network connection is slow or unavailable. It also provides the ability to flexibly configure the interface and disable unused functions. 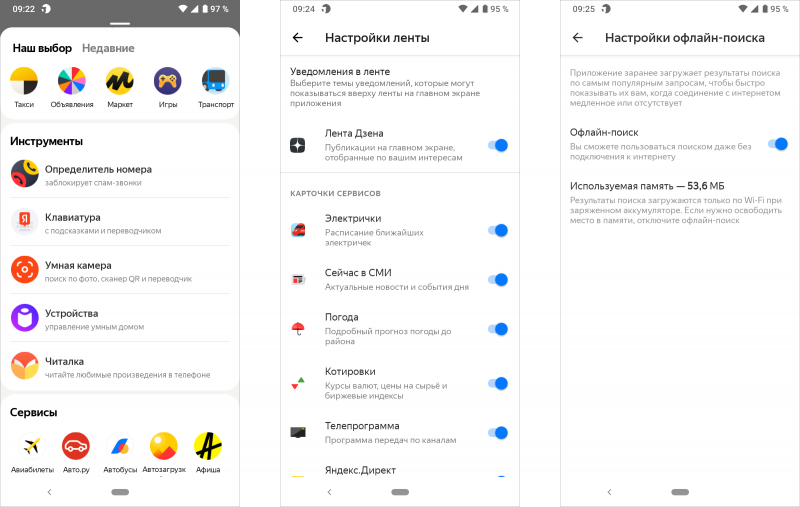 All-in-One Calculator is a sophisticated calculator, under the guise of which there are about a hundred tools for all kinds of mathematical calculations. All-In-One Calculator allows you to solve algebraic and geometric problems, as well as linear and quadratic equations, can convert values ​​between different systems of units of measurement and convert currencies, can operate with dates, distances, times and other quantities. In addition, the program can be used to solve combinatorial problems, as well as financial and other calculations. Such a mobile “bookkeeper” can be useful for people of different professions, and especially for schoolchildren and students. 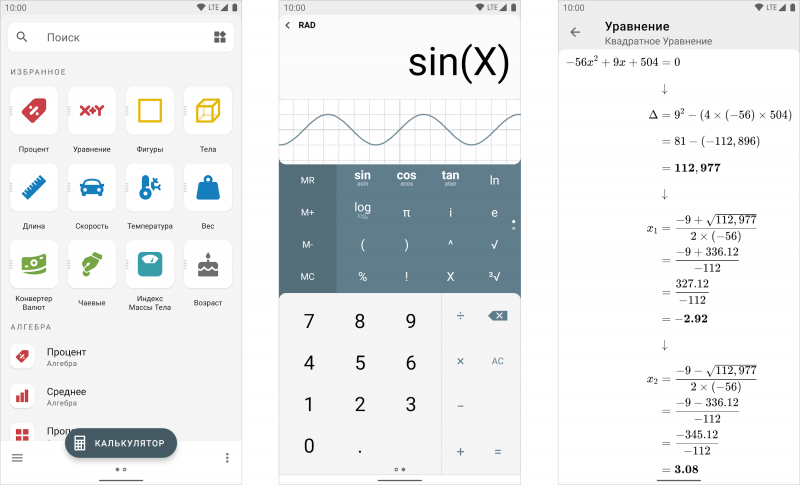 Beeper is a universal IM client that combines 15 communication services and instant messengers in a common interface. The program supports WhatsApp, Facebook Messenger, iMessage, Android Messages (SMS), Telegram, Twitter, Slack, Hangouts, Instagram, Skype, IRC, Matrix, Discord, Signal, Beeper network. In the future, integration with LinkedIn, Line, GroupMe, Microsoft Teams, WeChat and Kakao is expected. It is reported that Beeper is built on the open source Matrix messaging protocol, and therefore, due to the security of the logins and passwords used by the application, you can not worry. 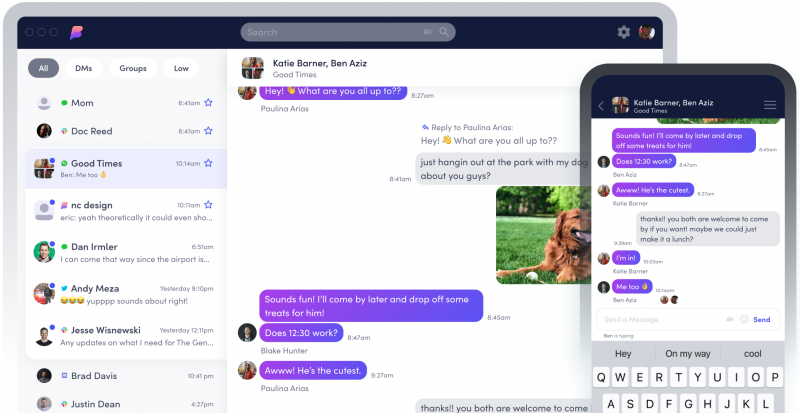 Developer: Sharpened Productions.
Cost: free (an annual subscription is available for 260 rubles, which turns off ads).
Download on Google Play.

File Viewer for Android is a file viewer and file manager that can open more than 150 file types, including archives, PDFs, Office documents (.doc, .docx, .ppt, .pptx, .xls, .xlsx), photo, audio, video and all kinds of multimedia content in exotic formats. File Viewer for Android supports RAW and TIFF images, scalable SVG vector graphics and Outlook emails, and can play TS media files. In addition to this, the application allows you to analyze the metadata of files and can be used as a tool for viewing the source code of the software with highlighting the syntax of various programming languages. For the convenience of working with a large number of files, the function of displaying their contents in the form of small thumbnails (thumbnails) is provided. 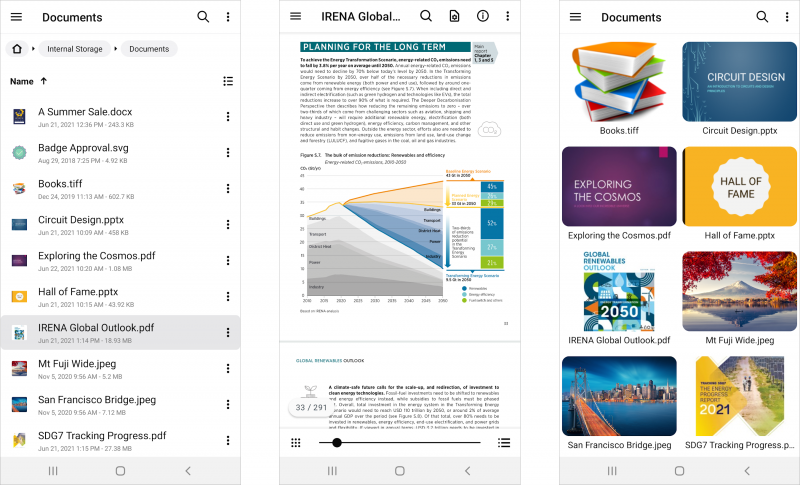 The proprietary Google application, in fact, is a minimalistic browser with shortcuts for quickly launching certain web applications and services. It is noteworthy that the catalog of the latter contains projects not only of the search giant itself, but also of third-party developers. In this regard, the company is more democratic than the aforementioned Yandex, which relies solely on its decisions. Google Go allows you to view the news feed, supports voice search, can translate texts using a camera, can voice web pages and solve other problems. It is argued that the program code is optimized to run on low-performance Android devices, and the technologies used ensure the normal operation of the product in networks with low data transfer rates. 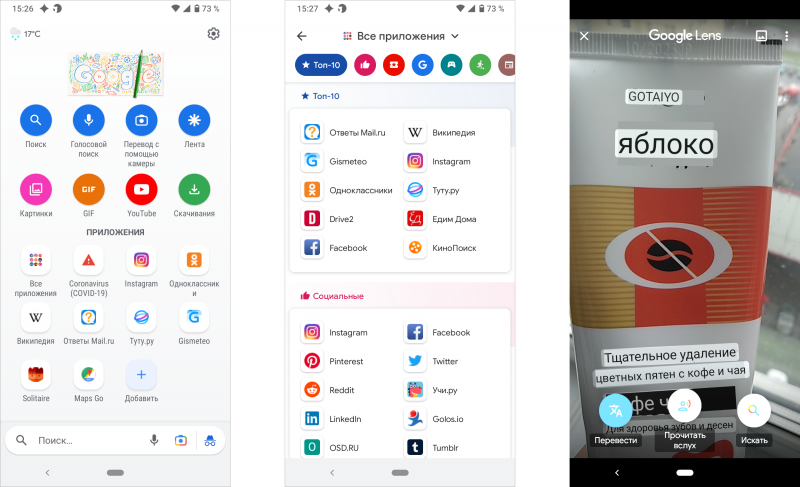 GPS Tools is a set of tools that fully reveals the capabilities of geolocation modules present in all modern smartphones. GPS Tools includes a speedometer, altimeter, compass, movement tracker, terrain orientation and distance measurements. The program also allows you to synchronize time using satellite signals of global navigation systems, supports importing geodata from files in GPX (GPS eXchange Format) files and – thanks to integration with meteorological web services – displays up-to-date information about weather and air quality in the region where the user is located. 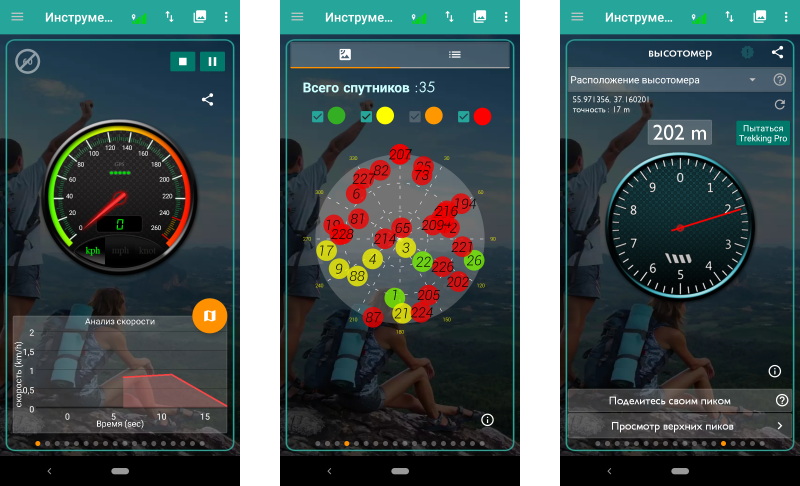 KMPlayerVIP is a player that is famous for its omnivorousness and functionality. In addition to the ability to find a common language with a huge number of data formats (AVI, MP3, WAV, AAC, MOV, MP4, WMV, RMVB, FLAC, 3GP, M4V, MKV, TS, MPG, FLV and other media files are supported), KMPlayer VIP is distinguished by its capabilities work with subtitles, streaming audio / video, local network resources and cloud storage Google Drive, Dropbox. Strengths of the program are also support for HD, 4K, 8K, UHD, Full HD video and Chromecast wireless broadcasting, the presence of built-in multimedia content editing tools, creating animated GIF files, an MP3 converter and a torrent client. A suitable option for those who need a “pumped-up” player. 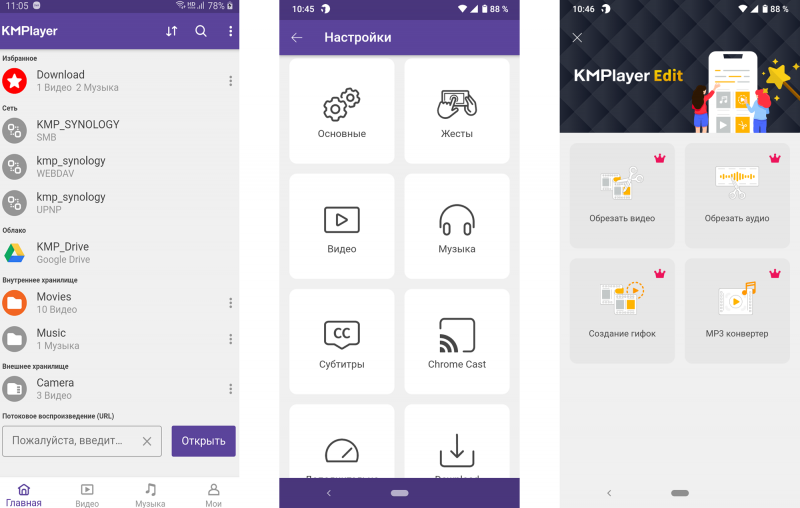 An application with which you can use almost any Android smartphone with an infrared port as a universal remote control for all kinds of equipment. Mi Remote controller supports TVs, air conditioners, set-top boxes, DVD players, projectors, fans, cameras and other devices from various manufacturers (Samsung, LG, Sony, Panasonic, Sharp, Haier, Videocon, Micromax, Onida, etc.) … The developers are constantly updating and expanding the base of supported technology. 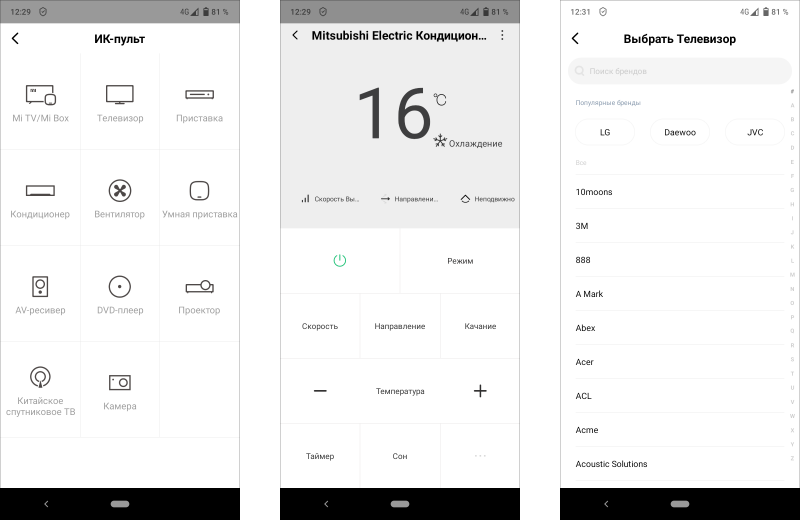 Word, Excel and PowerPoint in one program (earlier, we recall, Microsoft’s office applications for Android were scattered). The product’s asset: the interface familiar to Office users, the availability of data synchronization tools with other devices, the ability to collaborate on documents, support for cloud services, built-in spell checker in Russian texts and other functions. Special mention should be made of data sharing controls that simplify the creation of documents, templates of various topics, as well as the function of converting table photos to Excel files and support for PDF documents that can be converted into an editable format right on a smartphone or tablet. 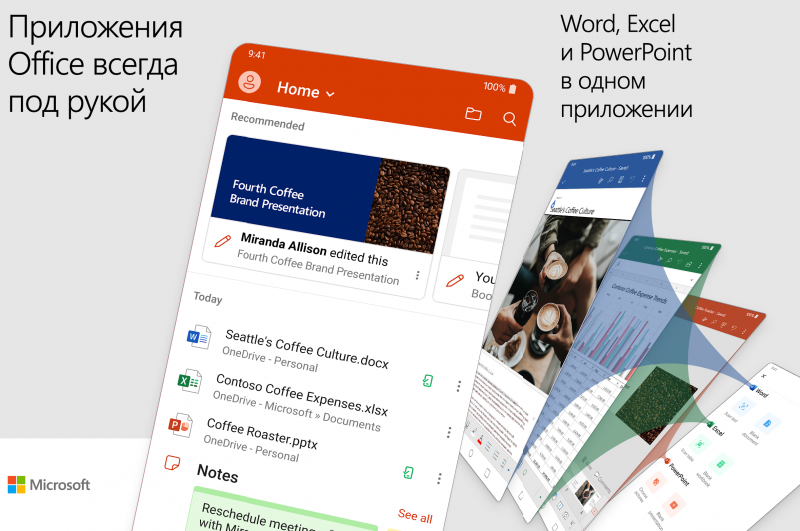 An application with a set of tools for diagnosing computer networks and troubleshooting. Network Utilities can scan TCP / UDP ports, recognize devices in the network infrastructure and determine their IP and MAC addresses, obtain information about domain name registration data, check the availability of web servers and connect to them using Telnet and SSH protocols. In addition to this, the program allows you to scan the air for Wi-Fi sources, determine the signal strength of each of the detected networks, as well as their characteristics (SSID, channel, encryption method, router MAC address, etc.) and draw visual graphs based on the collected information , reflecting a clear map of wireless networks. An excellent choice for system administrators and network-savvy users. 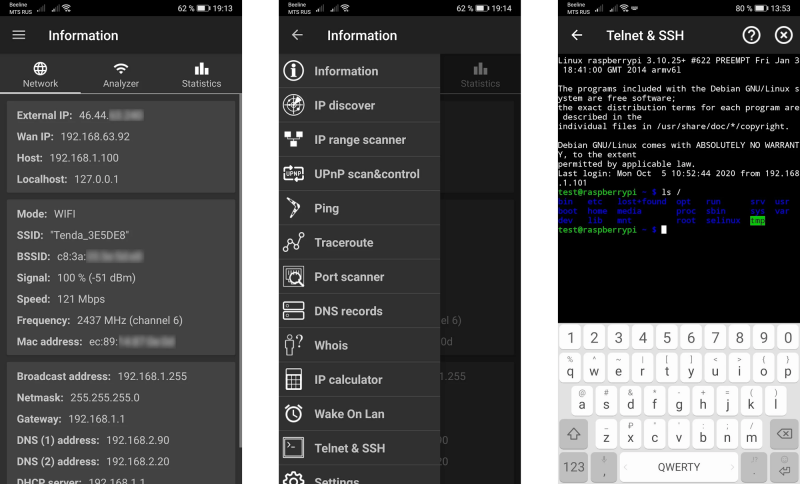 The brightest “multitool” in our review, which can be safely recommended to all, without exception, owners of Android smartphones who want to use the capabilities of the gadget one hundred percent. Smart Tools makes it easy to use the device as a rangefinder, protractor, level, compass, metal detector, sound level meter, vibrometer, light meter, flashlight, magnifier, mirror and many other useful tools in the household. For the full operation of the program, you need to support a whole heap of sensors in your mobile device: illumination, proximity, accelerometer / gyroscope, magnetometer (digital compass), barometer and others. 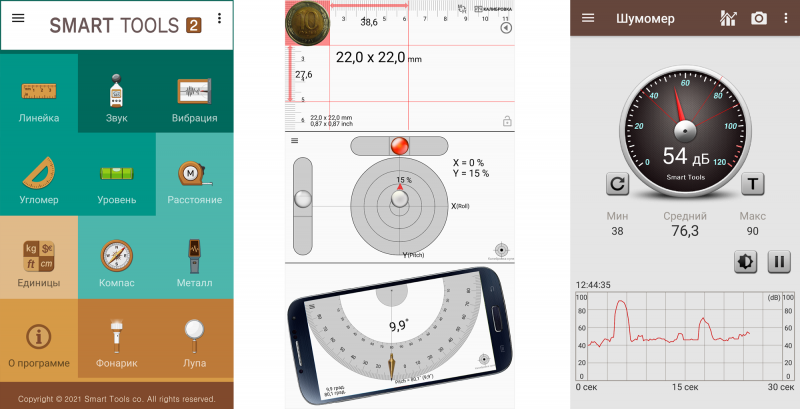 Android version of the legendary file manager known for its powerful features. In terms of functionality, Total Commander is in no way inferior to its older computer counterpart and also supports file management through a two-panel flexible interface, full-fledged work with archives, access to network storages via FTP / SFTP / WebDAV protocols, data transfer via Bluetooth and Wi-Fi. In addition, the program has a built-in text editor, a media player with support for streaming services, and other useful tools. Finally, another distinguishing feature of Total Commander is the system of plug-ins that allow – like a designer – to expand the product’s capabilities in accordance with the user’s needs. 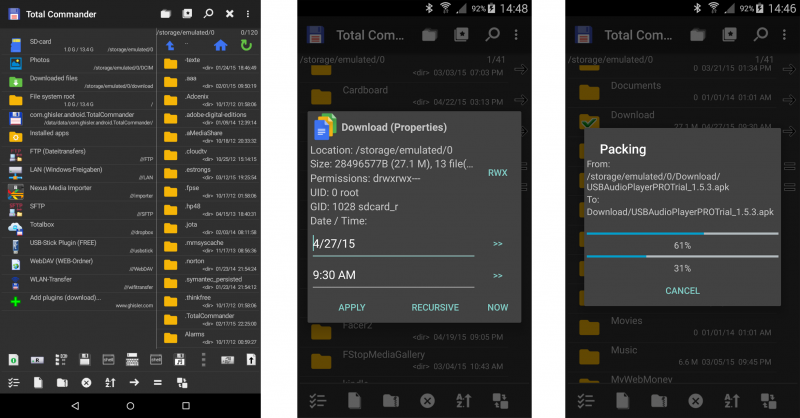 Anything to add? Write in the comments to the review.