Cardano announced the launch of smart contracts on September 12th. This gives us just two days before launch. Ahead of this event, crypto exchange giant Binance has taken steps to make sure their platform is compatible with the update.

The announcement was posted by Binance on its official website. The network update and hard fork is slated for Era 290 or around 12:44 UTC on September 12, 2021.

The announcement notes that the Cardano update and hard fork will not generate new tokens or impact ADA token trading on the platform. Although deposits and withdrawals for ADA will be closed until it is confirmed that the update and hard fork are working properly. Users who hold ADA tokens on Binance are also advised to set aside sufficient time for their deposits before expiration. And the cryptocurrency exchange will take care of all the technical requirements associated with the update.

How a Cardano update will affect the network

There are many good things to say about the possibilities of smart contracts on Cardano. For example, the ability for developers to create decentralized applications (DApps) on the network, thereby enabling features like Decentralized Finance (DeFi) protocols and decentralized exchanges that work successfully on networks like Ethereum, Binance Smart Chain, Solana, and Avalanche.

With the world’s leading smart contract platform, Ethereum, overwhelmed, it is imperative for other competitors to have similar capabilities. The Alonzo Purple upgrade and hard fork will allow Cardano to compete with Ethereum for DeFi services such as lending, staking, and pharming. The platform will also have the ability to create custom tokens and minting NFTs.

The price of the underlying Cardano blockchain asset (ADA) is still in a downtrend after the crash that shook the market on September 7th. Over the past three days, the token has hardly recovered, despite the long-awaited update of smart contracts, which will take place in two days. 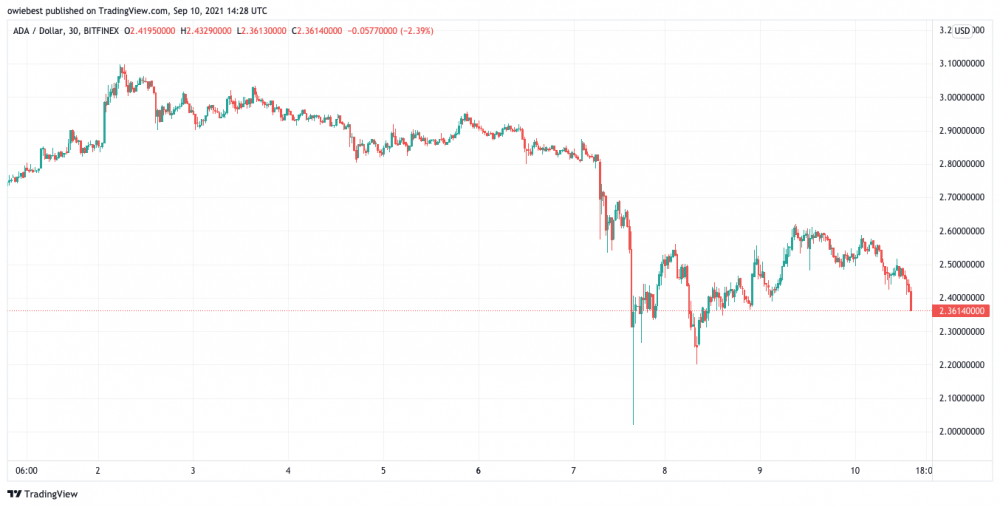 ADA price is still in red | Source: ADAUSD on TradingView.com

The ADA is currently trading in the $ 2.3 range after spending most of yesterday to hold the $ 2.5 area around which the cryptocurrency has equilibrated after crashing and recovering.