Ukrainian athlete Yaroslava Maguchikh was again photographed together with Russian woman Maria Lasitskene. As reported by Censor.NET, their joint photo was published on Instagram … INOSMI, 09/10/2021

Ukrainian athlete Yaroslava Maguchikh was again photographed with the Russian woman Maria Lasitskene. According to Censor.NET, their joint photo was posted on Instagram by Australian athlete Eleanor Patterson. “The Final of the Diamond League; Thank you for the great event, ”the Australian athlete commented on this photo, which was posted 13 hours ago. At these competitions, the Russian woman won the final with a score of 2.05 meters, and Maguchikh became the second (2.03 meters).

Recall Maguchikh after the high jump competition at the 2020 Olympics in Tokyo was photographed together with athlete Maria Lasitskene, who serves under the flag of the Russian Olympic Committee. In social networks, they criticized the Ukrainian woman and drew attention to the fact that Maguchikh is a serviceman of the Armed Forces of Ukraine, and Lasitskene is a captain of the Armed Forces of the Russian Federation.

Maguchikh herself said that she did not deny the war between Ukraine and the Russian Federation, and in the photo with Lasitskene it was not an expression of any political position.

Here (further obscene – ed.), kick her out of the APU! And I will not be surprised if tomorrow it turns out that the Maguchikhs have a Russian passport!

Just dismiss from the army, deprive of salaries, pensions and medical care. Why are such organisms in the Ukrainian Armed Forces? In the event of a war, she will behave like Crimean esbearers.

The poor “girl” was “intimidated”.

Oooh … Wrong, this is love.

At whose expense did this lieutenant of the Armed Forces of Ukraine go to the competition? Is it for our (budget) by chance?

Noble trolling! Who knew the Mighty before the scandal?

Doubtful fame. Now everyone knows for sure that she is a zoophile.

Those who were interested in sports news knew! Yaroslava’s surname is Siberian, and the Russian woman is completely non-Russian!

Yes, it is clear that it is not Ukrainian! Genes to see this Yaroslava are calling back to under-empire! Let her go, for me she is not Ukrainian, but a real Little Russian without a flag, without a tribe! Shame.

What a disgusting thing, ugh!

So I drew conclusions.

Maguchikh is Lomachenko in a skirt. It is disgusting when a country is represented by such a creature.

Maguchikh: the 1st time is an accident, and the 2nd time is just a coincidence.

She clearly did not read the news about the ten wounded soldiers today. Let it go to hell for the curb. The disgust at her kissing enemies outweighs all her sporting achievements.

It turns out that this was correctly hounded (further obscene – ed.)… Didn’t get to the idiot …

And why does it not occur to any of the indignant commentators that this is the recruitment of a major of the RF Armed Forces?

This should be done by counterintelligence, not “indignant commentators” 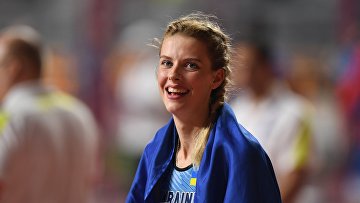 And they said that she was a stupid girl: she didn’t know, she didn’t hear, etc., but it turned out that it was a convinced cotton wool.

Send her to the front lines. Let him try to be photographed there.

There should be a state policy of ignoring Russia in all spheres of activity, and other states should be encouraged to do so. By not participating in events where there is Muscovy, we will save budgetary funds and this will not reduce the yield, etc.

This is the greatest zrada in the universe. The Australian took a picture of six, horror.

The Katsap spies do not “burn” at all.

“With the end of the season, I would like to put an end to one more question. Over the past month, I have heard a lot of interesting things about myself. Of course, everyone has their own point of view, but let’s at least express ourselves correctly. Instead of writing nasty things to me, you better take care of yourself and use your time to good use.

Dear journalists, when will you start thinking and then writing? For some I do the long jump, for others I finish, where have you seen the finish in the high jump?

Now about the photo: it was taken at the request of Kamila Litsvinko, who is ending her career, she wanted to capture memories.

And now the culmination: in the photo I am not hugged by Maria (Lasickene), but by Nicola McDermott, who represents Australia.
Respect each other, please. Everyone is good, and I’m going on vacation, ”Maguchikh wrote on her Facebook page.

InoSMI materials contain assessments exclusively of foreign mass media and do not reflect the position of the InoSMI editorial board.