The Formula 1 qualification has finished at the Monza circuit. She will determine the starting order of the sprint qualification for the Italian Grand Prix.

Monza is sunny and dry enough. Taking into account the weather conditions, the outsiders will not have much of a chance to break into the second segment. Although this is “Monza” – here you can play a lot of time if you take advantage of the situation and catch a slip stream on the straight. And the teams understand this. In the past, at the Italian stage, situations have already arisen when a real traffic jam was formed in the last corner and not all participants in the end managed to go to the last fast lap.

The main favorite here and now seems to be Lewis Hamilton – the Mercedes pilot in the first practice brought all his rivals 0.5 seconds – this is a very serious advantage. Let’s see how Red Bull will respond.

The racers did not sit in the pits – with the start of the session, several cars drove onto the track, and the best time after the first fastest lap in this group was shown by the Ferrari pilot Carlos Sainz. But that’s 2 seconds slower than Hamilton this morning.

At the same time, Leclerc had some problems with the car – Charles complained about the work of the car when braking by the engine. The team told Monegasque to return to the pits. Norris has the best time with 12 minutes left – and it is still far behind Lewis’ morning result. We are waiting for the teams to roll in and the leaders show the battle time.

After the first attempts, the best time for two Mercedes – Hamilton ahead of Bottas by 0.25 seconds, and the rest brought at least 0.7. There is a suspicion that there will be no intrigue. Max Verstappen is 9th so far – the Red Bull driver was spoiled by a fast lap by slow cars. A little later, Max managed to drive a normal circle and show the third time.

At the end of the session, real chaos reigned on the track – again a queue at the last corner before leaving for a fast lap. As a result, the following were among the losers: Tsunoda, Latifi, Schumacher, Kubica and Mazepin… Russell was eliminated, but then Tsunoda’s lap time was canceled for exceeding the track boundaries!

The huge advantage of “Mercedes” in speed was converted into a confident leadership of Lewis Hamilton and Valtteri Bottas over their pursuers: “Silver Arrows” took the first lines of the protocol already in the first attempt and at the same time were ahead of the competition by a significant 0.4 seconds.

Before the second attempt on the pit lane, an accident almost happened: the mechanics of “Aston Martin” made a mistake with the release of their cars, as a result, Sebastian Vettel almost crashed into a passing Lewis Hamilton.

In the final seconds of the segment, both Aston Martin cars did not stay in the top 10 (Vettel apologized to the team for the mistake), as did the Alpin drivers, and George Russell took 15th place at Williams.

Max Verstappen managed to add, but did not catch up with the Mercedes. Worse for the Dutchman, he was overtaken by Lando Norris, who confirmed McLaren’s good form at Monza. The biggest surprise came from Antonio Giovinazzi, who burst into seventh place.

At the start of the final part of the session, Red Bull decided to arrange a double slipstream: Pierre Gasly was the first to leave the pits in Alpha Tauri, followed by Sergio Perez on old tires, and Max Verstappen closed the top three.

This trick helped Max get as close as possible to Hamilton (the Dutchman lost only 0.017 seconds to the session leader), and at the same time, Bottas (who will be fined for replacing the engine) made a mistake in one of the corners and lost a huge amount of time and missed not only one Red Bull, but also two McLaren.

By the last qualifying attempt, Red Bull did not use Gasley’s services, so Sergio Perez had to lead the peloton. However, his help did not help Verstappen – he failed to surpass his best result.

Hamilton became faster, but lost 0.096 seconds to Bottas, who will start the Saturday sprint from the first position (the penalty awaits him on Sunday). The McLaren were left behind Verstappen, but Gasley, who took advantage of the slipstream from Max’s car, took off to sixth position. The protocol was closed by Giovinazzi, who lost almost 0.2 seconds to Perez.

Retired after the first segment: 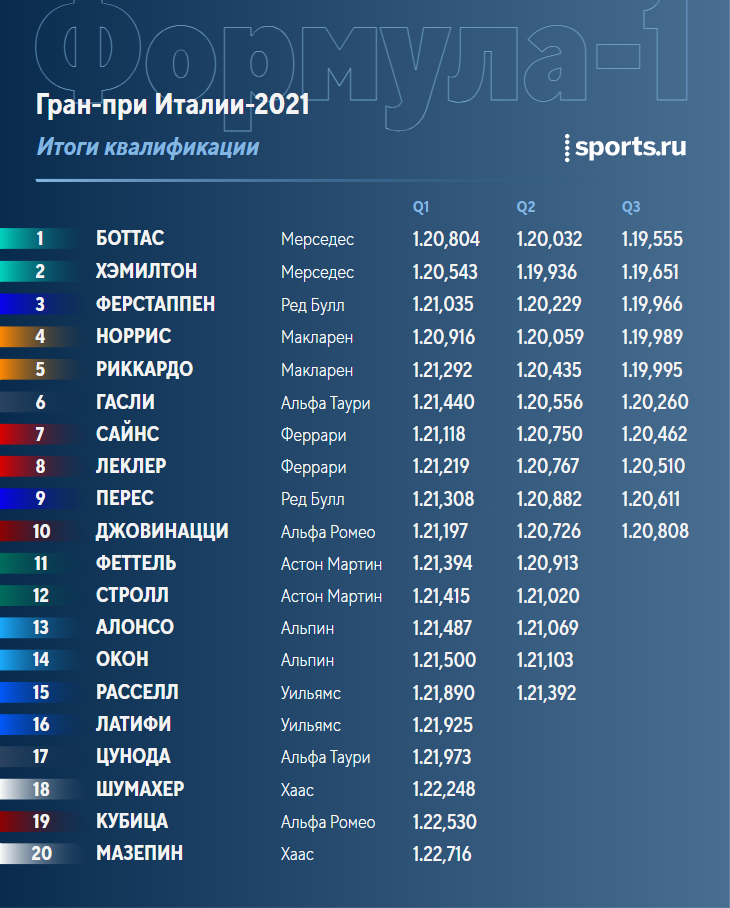