Black holes are areas of outer space where there is so much mass in a small volume that there is an event horizon – an area of ​​space from which it cannot escape … INOSMI, 09/12/2021

Black holes are areas of outer space where there is so much mass in a small volume that there is an event horizon – an area of ​​space from which nothing, not even light, can escape. But that doesn’t mean black holes suck in matter. They just attract her.

Black holes are perhaps the strangest and most amazing objects in the universe. There, a huge mass is concentrated in a very small volume, and black holes inevitably collapse to a state of singularity, surrounded by event horizons beyond which nothing can go. These are the densest objects in the universe. When something gets too close to them, the forces of the black hole tear it apart. When matter, antimatter, or radiation crosses the event horizon, they simply fall into the center of the black hole, enlarging it and adding to its mass.

These properties of black holes do exist, and they are all true. But there is one idea associated with this, which is an absolute fiction: that black holes suck in the matter located around them. This is very far from the truth, and it is a complete distortion of the picture of gravity. The biggest myth about black holes is that they suck in matter. And here is the scientific truth.

In principle and in practical terms, a black hole can form in a variety of ways. A large massive star can go supernova, the central core of which collapses and forms a black hole. You can see how two neutron stars merge, and if they pass a certain mass threshold, then the result is a new black hole. Either a huge cluster of matter (a supermassive star or a giant cloud of shrinking gas) collapses and directly turns into a black hole. 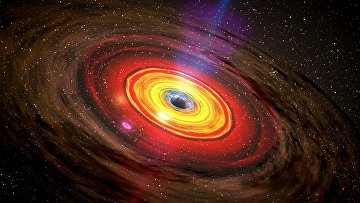 But objects outside the black hole also have a lot of problems. Black holes are so massive that if we get closer to one of them, we begin to experience significant tidal forces. You may be familiar with these tidal forces if you know what the moon is and how it interacts with the earth.

Undoubtedly, the Moon and the Earth can be considered as material points located at a relatively large distance of 380 thousand kilometers from each other. But in fact, the Earth is not a point, but an object that occupies a certain and quite real volume. Some areas of the Earth are closer to the Moon than others. Those that are closer, experience the force of gravity more than average. Those further away experience less than average gravity.

But there are other features besides the difference in distance. Like all physical objects, the Earth is three-dimensional. This means that the “top” and “bottom” of the Earth (as viewed from the Moon) are pulled inward, towards its center relative to those parts that are in the middle.

With all this, if we subtract the average force that exists at any point on the Earth, we will see that different points on the surface are exposed to external forces from the Moon in different ways. The lines of these forces make up the relative forces acting on the object, and explain why the object under the influence of the tidal force is pulled towards it and compressed perpendicular to the direction of this force.

The more we get closer to a massive object, the more tidal forces become. They grow even faster than gravity! Because black holes are massive but very compact, they create the most powerful tidal forces in the universe. For this reason, as we approach the black hole, we stretch more and more, becoming like thin spaghetti.

Based on this, it is very easy to understand why a black hole can suck us in. The more we approach it, the more powerful the gravity becomes, and the more the tidal force begins to stretch and tear us.

However, the idea that we can be sucked into a black hole is wrong. Any particle that makes up an object that is under the influence of a black hole still obeys the well-known laws of physics, including the rule of curvature of space-time from general relativity.

Yes, because of the presence of mass, the fabric of space is curved, and the black hole is the largest accumulation of mass in the universe. But it is also true that the density of this mass does not in any way affect the curvature of space. If a white dwarf, neutron star or black hole with the same mass is placed in the place of the Sun, the force of gravitational influence on the Earth will not change. The space around us is curved by the total mass as a whole, and density has practically nothing to do with it.

From a distance, a black hole looks like any other mass in the universe. But if we approach it at a minimum distance of several radii of the Schwarzschild sphere, then we begin to notice deviations from Newtonian gravity. However, the black hole still acts simply as a center of gravity, and objects approaching it orbit in a normal orbit: a circle, ellipse, parabola, or hyperbola with a very good approximation.

Tidal forces can cause approaching objects to stretch and break apart. And as matter accumulates around the black hole in the form of an accretion disk, additional consequences such as magnetic fields, friction and heating can arise. Due to this additional impact, some of the matter will slow down and be swallowed by the black hole, but most of it will still remain outside. 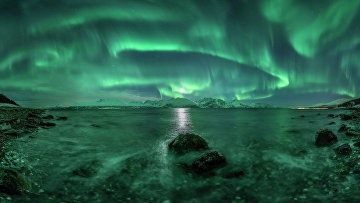 The fact remains that black holes do not suck in anything. All other ordinary objects (moons, planets, stars) have the same forces that a black hole possesses. Anyway, it’s all just gravity. The biggest difference is that black holes are denser than most objects, take up much less volume in outer space, and can be much more massive than any other object. Saturn quietly flies in its orbit around the Sun, but if instead of the Sun in the center of the Milky Way we put a black hole, the mass of which is four million times the mass of our star, then the tidal forces will break Saturn, turning it into a giant ring, and it will become an integral part of the accretion disk this very black hole. And if there is enough friction, heating and acceleration in the presence of gravitational, electric and magnetic fields generated by matter, then over time it will fall inward and be swallowed.

It only seems that black holes are absorbing matter, because they are very massive, and tidal forces and matter accumulated around the black hole together can tear external objects into pieces, after which part of such an object, under the influence of the pulling force, will be inside the accretion disk, and over time and inside the black hole itself. But a black hole is very picky, and the vast majority of the matter that passes close to it is spat out back in one form or another. And only a small part gets inside the event horizon, forcing the black hole to grow gradually.

If we replace all the mass in the Universe with a black hole with the corresponding mass, and then remove everything that creates friction, say, accretion disks, then the black hole will suck in very little. The particles will only undergo friction due to the radiation of gravitational waves, passing through the curved space-time generated by the black hole. According to Einstein’s theory, only that matter that is inside and in the very center of a stable cyclic orbit will be absorbed inside. This is negligible compared to what falls inside the event horizon in our physical reality.

As a result, we have only the force of gravity and the curved space-time arising from the presence of these masses. The idea that black holes suck something in is the biggest myth. They increase due to gravity, and nothing else. But this is more than enough in the Universe.

InoSMI materials contain assessments exclusively of foreign media and do not reflect the position of the InoSMI editorial board.