After several years of preparation, the Alonzo update was launched on the Cardano mainnet today at 00:37 Moscow time during Era 209. Alonzo is a key element of the “Gauguin era” in the Cardano roadmap and is to add support for smart contracts. Prior to that, the deployment of the update was tested on a test network for several months.

The first release of Cardano took place in September 2017. The project was conceived by Ethereum co-founder Charles Hoskinson as a competitor to the original platform with a focus on academic research, but without smart contracts, such competition was impossible.

“We’ve been working for a very long time,” Hoskinson said in a recent video message. – Some of the team members have been working for more than four years. We got the job done. On Monday, September 13th, we will wake up. Everything will go on as usual. The web will probably be much heavier because people will want to experiment, and that’s okay. A few weeks later, the latest and greatest version of the Plutus architecture will be released, and the Cardano Summit 2021 will take place where the ecosystem as a whole will be in the spotlight. ”

“Let’s face it, there will be holes along the way,” writes Input Output (IOHK), which oversees the project. – Early user experience may not be ideal. Some early decentralized applications will have problems. We will see both outstanding and incapable development teams. This is a decentralized blockchain with unlimited access, so this situation is inevitable.

This update has raised high expectations. Some of them are unfounded. Observers can look forward to an advanced ecosystem of consumer-grade decentralized applications available immediately upon upgrade. Expectations should be tempered. “

So, the decentralized exchange with support for multiple pools Minswap was forced to suspend work shortly after launch on the test network, as it was unable to process multiple transactions at the same time. Hoskinson reassured the audience on Wednesday that at least “a few toy contracts” will be presented during the release phase, which IOHK itself has prepared for the occasion.

Here’s what the description of one of these contracts says:

“Charles has a lobster, but the poor creature has no nickname. Let’s use a simple Cardano-powered Plutus smart contract to help Hoskinson pick a nickname for the lobster.

We offer a list of nicknames and a “secret random” number, which we will reveal only at the end. Then we’ll need community help! We need 500 community members willing to help name the lobster by creating transactions that will add their “random” numbers (from 1 to 100) to the current amount.

At the end we will reveal our ‘secret random’ number, add it to the community sum and use the result to determine the nickname. “ 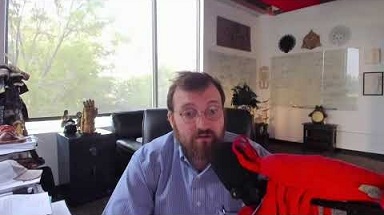 Ahead of today’s release, Cardano’s own token (ADA) experienced a brief resumption of growth, but has already pulled back from daily highs by 6% and is trading around $ 2.57. From July lows, the ADA price climbed 200% to a high of $ 3.10 recorded on September 2.