The Italian Grand Prix has become one of the brightest stages of this season. Max Verstappen and Lewis Hamilton again did not share the track, and both ended up in gravel. Daniel Ricciardo brought the long-awaited victory to McLaren, and Valtteri Bottas broke from last place to the podium.

The Adventures of Bottas

The results of Saturday’s sprint at Monza have slightly stirred up the usual starting lineup for this season’s races. Despite the victory in qualifying and sprint, Mercedes pilot Valtteri Bottas started the race from the end of the peloton due to a penalty for changing the power plant. After an accident on Saturday, Alfa Tauri driver Pierre Gasly started from the pits, although on Friday he was sixth in qualifying. A few minutes before the start, the French team brought the car of his partner Yuki Tsunoda into the pits. Mechanical problems prevented the Japanese from starting the race at all. And after a couple of laps of the race, Gasley finished his performance due to technical problems.

Former Red Bull teammates Max Verstappen and Daniel Ricciardo kicked off from the front row, while Britons Lando Norris and Lewis Hamilton kicked off right behind them. The Ferrari drivers led by Charles Leclair and the Italian Antonio Giovinazzi were going to delight the local public in the race, sitting behind the four leaders at the start. 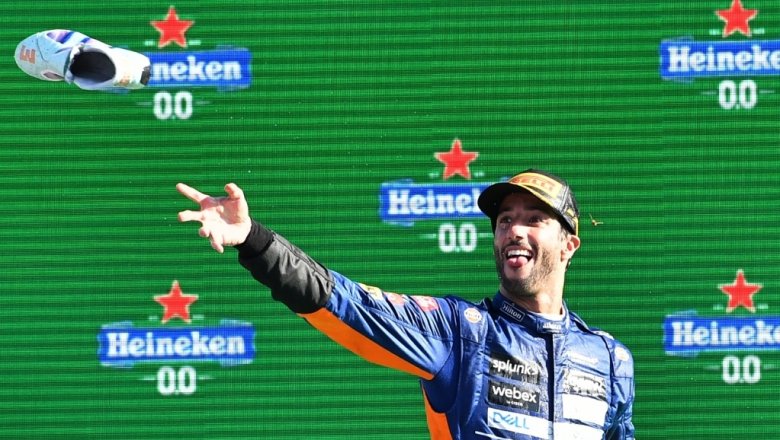 Ricciardo is an unexpected leader after the start at Monza

The hero of the starting spurt was the McLaren pilot Ricciardo. The Australian managed to pass Verstappen and took the lead in the race just before the first corner. Behind them, Hamilton overtook Norris and went on the attack on Max, but the Dutchman did not allow himself to pass. Verstappen squeezed out Lewis in the corner, and the Briton had to return to fourth place, letting Lando go ahead. Hamilton was unhappy with the actions of his main rival in the championship, but this, as it turned out, was not the last tough episode of the race with the participation of the leaders of the season.

Behind the four, Carlos Sainz knocked out Alfa Romeo driver Antonio Giovinazzi on the first lap, leading to a virtual safety car. At the end of the peloton, Nikita Mazepin did not retain the advantage over his team-mate, which he received thanks to the sprint: Mick Schumacher passed the Russian rider on the stratum.

Daniel Ricciardo was in the lead during the first half of the race. Max Verstappen kept up with the Australian, but could not launch an attack on the McLaren pilot. Norris held a double podium for the team, while Lewis Hamilton was powerless. During a series of pit stops, Max Verstappen was the main loser. The team made a mistake during the change of tires, and the Dutchman stood in the pits for a long 11 seconds. Meanwhile, Hamilton finally passed Norris and greatly improved his chances of regaining the championship lead. However, the second half of the race began with an event that will go down in the history of Formula 1.

Verstappen and Hamilton rekindle the fire.

Lewis’s pit stop did not go as smoothly as planned, but the Briton still had to confidently ahead of Verstappen after his stop. Hamilton hit the track between Norris and Max, but the Dutchman was not going to stay behind his rival in the fight for the title. Verstappen immediately went on the attack in the first corner. The risky overtaking ended badly for both championship leaders. Hamilton, not wanting to concede, left no room for the Dutchman to maneuver, which led to a collision. Verstappen flew up on the curb, and then on the British wheel. As a result, Max landed on Lewis’s car. When the Dutchman had already got out of the car, the Briton tried in vain to get out from under Max’s car. The accident led to the emergence of a safety car.

Another clash between Verstappen and Hamilton will once again divide the fans into two camps. In this battle, no one wanted to concede – the passions are too heated this season. A new accident of the main rivals in the season was inevitable, although no one imagined that it would happen already at the Italian Grand Prix. The judges are unlikely to find any of the riders guilty of the incident, but Red Bull and Mercedes will find details by which it will be possible to find the instigator of the accident. The Italian episode in the confrontation between Hamilton and Verstappen, perhaps, will be one of the highlights of this season.

After the clash between the leaders of the season, “McLaren”, namely Ricciardo, had to avoid serious mistakes at the end of the race in order to take first place for the first time since 2012. At the restart, Charles Leclair, who unexpectedly found himself in second position, began to concede his opponents. Monegasque lost to Norris, Perez and Bottas. Lando Norris finished second, giving McLaren a stunning double podium finish for the team. The fierce battle between Perez and Bottas, who broke through to the leaders from the last place, determined who would take the third position on the podium. However, the decision of the judges was key in this battle. Sergio received a five-second penalty for cutting off the track against Leclair, which allowed Valtteri not to even try to overtake the Mexican on the track.

As a result, Daniel Ricciardo brought the long-awaited victory to McLaren, while Lando Norris finished second and added to the phenomenal success of the team. Valtteri Bottas had a perfect weekend and, with victories on Friday and Saturday, managed to climb the podium on Sunday. The top five were closed by Charles Leclair and the fined Sergio Perez. At the end of the peloton, Mick Schumacher and Nikita Mazepin again grappled with each other. The Russian knocked out the German, for which he received a fine. Nevertheless, Mazepin was not destined to finish. The Russian quit due to technical problems. It seems worth waiting for a new scandal not only among the leaders, but also in Haas.