The amazing magic of Wrath of the Righteous – everything here is familiar to one degree or another: from the archetypes of heroes and antagonists to the global story of absolute evil and the great chosen one; from the basic formulas by which skill checks are carried out, to a variety of damage and defense modifiers. And yet the specific charm of a classic fantasy adventure, despite its textbook character, manages to captivate for dozens of hours, and a deep role-playing system and a dozen different game aspects will challenge even a seasoned CRPG veteran. And if this is not enough for someone, then how about tactical turn-based battles of armies in the spirit of “Heroes”? 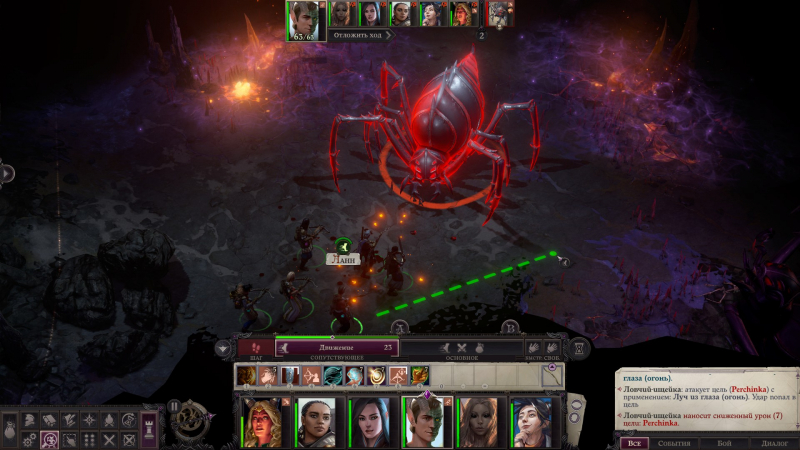 Why, in a world where spiders can swing from a decent house, not a single magician has made a “crushing blow with a slipper” spell?

But before going all out, the player will have the most fun part of any CRPG – character creation. This business is not quick and very addictive, because in Wrath of the Righteous there is simply an unthinkable number of options for building a hero. To begin with – a choice of a couple of dozen classes (plus several subclasses in each) and twelve races – from the classic man to kitsune, adorable anthropomorphic chanterelles. In addition, it is necessary to select the origin and biography, on which certain starting parameters will also depend.

And we’re not even halfway there yet! Then they are waiting for: the distribution of points by characteristics, the choice of skills, traits, starting spells (there are also an incredible abundance of them here), deities, worldview, and, of course, let’s not forget about the calibration of the hero’s appearance. Everything except the last one will affect the game in one way or another, so it is worth approaching the creation of the hero with all responsibility, so as not to suddenly blind the “lame” character, for whom it will be a little difficult to save the world. Fortunately, WotR helpfully tells you where to invest, which combinations are successful, what, what and why gives penalties, and what is, in principle, unpromising for a given race or class. However, even so, you still have to pretty much smash your head. 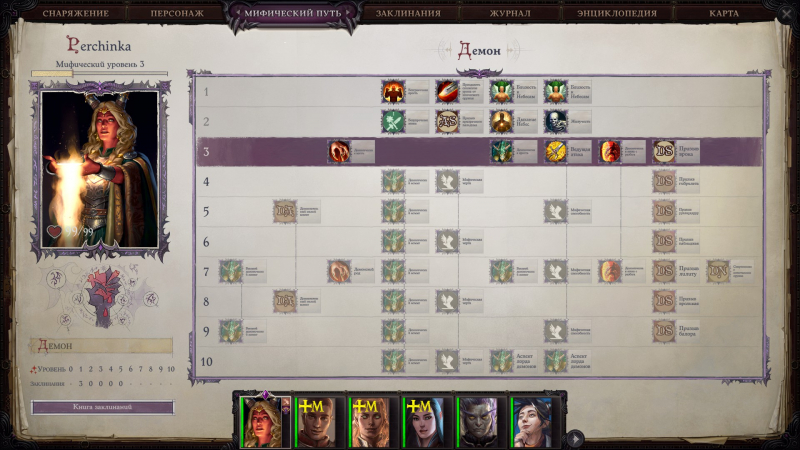 And then there are mythical levels (they open as you progress), which also strengthen the hero and give him additional advantages. And yes, sometimes Pathfinder: Wrath of the Righteous has a slight overabundance of mechanics.

Skills, as usual, help to overcome the evil fate of the multifaceted cube, which is responsible for various checks and, of course, for combat effectiveness. After all, if in the early game the battles seem to be easy fun and give a false sense of invincibility (familiar, right?), Then after a couple of hours the opponents will tear the squad to shreds, inflict deadly critical hits and daringly bypass defense and evasion chances. And, although this is a completely familiar situation for the genre, there is an unpleasant nuance. In Pathfinder: Wrath of the Righteous, the fights are incredibly tight – sometimes even a couple of steps cannot be taken so as not to get caught in another mess. And if you can restore the squad’s exhausted agility with a halt (the main thing is not to rest too often – this can increase the level of damage, which will negatively affect the characteristics), then there is nowhere to restore the player’s strength – from non-stop battles, the campaign turns into a tiresome and uninteresting routine. At the same time, the incredibly long storyline combat segments, sometimes lasting for several hours and annoying long before the last demon on the way, were also subdued …

It is especially frustrating when a lengthy episode is suddenly accompanied by technical glitches that make the passage even more exhausting. For example, when an NPC with a quest key suddenly flies into a corner and stops displaying normally, and you run around the location for an hour or two and do not understand how to get out of it; or the frame rate drops to depressing values, and it also happens that exit points disappear at locations (loading the last save saves). Of the unpleasant little things, I also note the wild sometimes the behavior of the camera in confrontations, and sometimes a strange thing happens – when a battle is initiated by an enemy located behind a wall, it only passes between ranged fighters, for some reason capable of shooting even through deaf obstacles. At such moments it is difficult not to quit the game in order to return after three or two patches (fortunately, patches are released regularly – a tradition of the series). And only a keen desire to find out what will happen next motivates to continue … 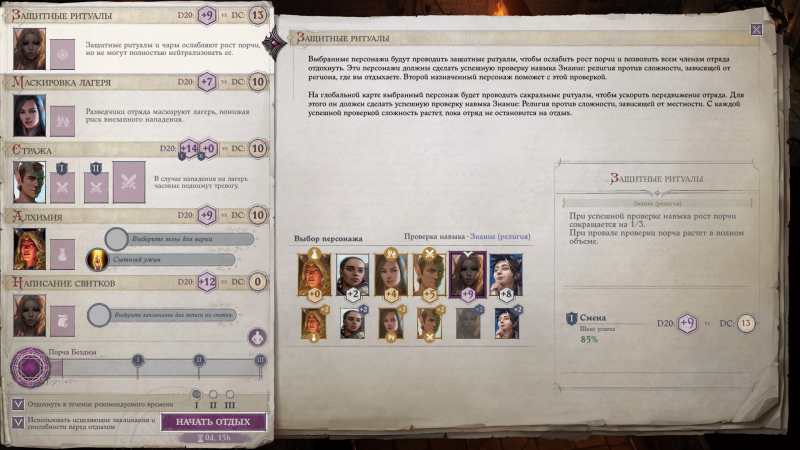 During the halt, it is important to correctly arrange the fighters according to the zones of responsibility, otherwise – expect trouble

Indeed, despite the standard plot of the genre with hateful motives of an inevitable cataclysm and an indispensable chosen one, which will unite all the righteous (and not only) for the “great decisive battle”, the story is truly captivating. Pathfinder: Wrath of the Righteous skillfully enacts a familiar piece, evokes empathy, and even creates true tension – it is worth paying tribute to the well-written dialogue and well-staged scenes on the engine. Besides the central arch, the game has something to offer the jaded fantasy fan.

First of all – colorful original characters and their collisions. That only there is a stern dwarf Staunton Wayne, in love with an insidious demoness and under the influence of feelings doing terrible things; or the eccentric scientist Nenio, whose pursuit of knowledge often sees no ethical barriers; or the dwarf Regill Lerenge, whose indestructible principles of a knight of the underworld coexist with subtle notes of melancholy and doubt. Yes, and all other heroes are written and played with dignity, and each has a convincing background and a kind of outlook on life, which he will certainly share in the most extreme situations. 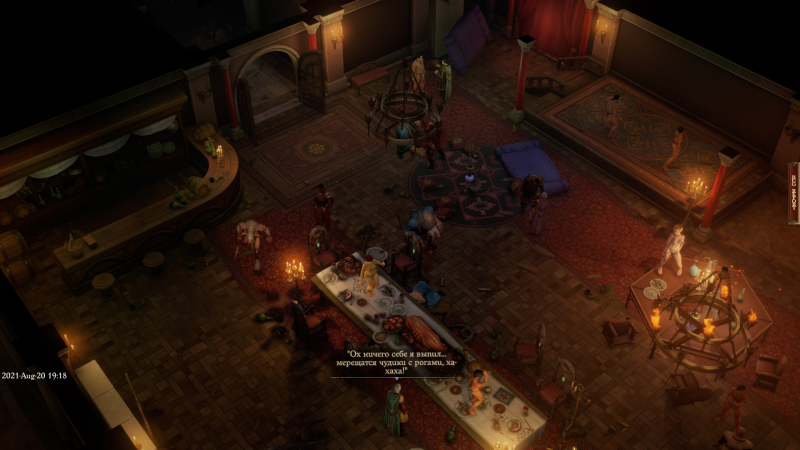 In addition to the dramatic advantages, the characters (those that we can lure into our squad) also have game nuances. For example, a mongrel (if roughly – a mestizo of a man and a lizard) Lann is an excellent archer, and his increased attention skill will allow him to notice hidden caches and not fall into hidden traps. The witch, nicknamed Ember, will also be appropriate in battle – her incinerating charms will add sparkle to any brawl. And brute force never hurts – the wandering knight Siil will not give lie… The main thing is to carefully study all the features and skills of your partners in order to assemble a balanced squad, which will not fail in a fight, and will succeed in skill checks. And some of them are associated with complex moral forks, and, of course, with most you can have a romance …

In the new Pathfinder, by the way, you have to take care not only of the squad, but also of the whole army of crusaders. After all under our strict control also happens (already the fifth in a row) a great campaign against demonic spawn. The commander has a lot of things to do: recruit fighters, increase their number by constant transfers across half the map, hire generals, develop them and correctly allocate time and combat resources. Well, the main dish is tactical battles in the spirit of “Heroes” or, if you like, King’s Bounty. One of the few places in the game where the evil die doesn’t have much power over what is going on. 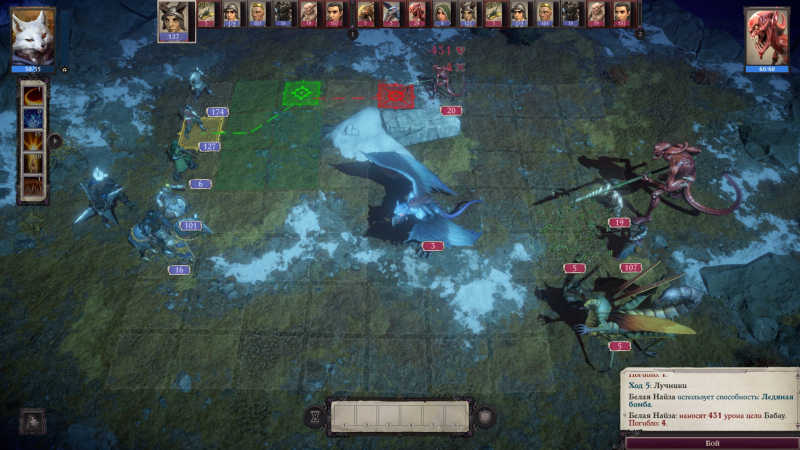 Tactical battles are good, but they lack a bit of pace and balance

The hero’s expedition with a combat squad and the crusade take place on the same global map and are completely interconnected: for example, a group can bury itself in an enemy garrison, which it simply cannot pass – after all, there is a legion (well, almost) of undead guarding. This is where our gallant Crusade armed forces will help! Or they will be smashed to smithereens, and then a new sacred army will have to be recruited. Although the goals of the army are righteous, the soldiers are still in no hurry to join our army for free – only for hard currency. But the hero and his group have to get it, completing side missions and selling trophies obtained in battles.

And let the battles, as already mentioned, be exhausting, and even the bugs with an unsuccessful in places optimization forces to make long pauses in the game, but still every time you come back here like on a holiday. A celebration of a deep, complex and nuanced role-playing game!

More about the grading system