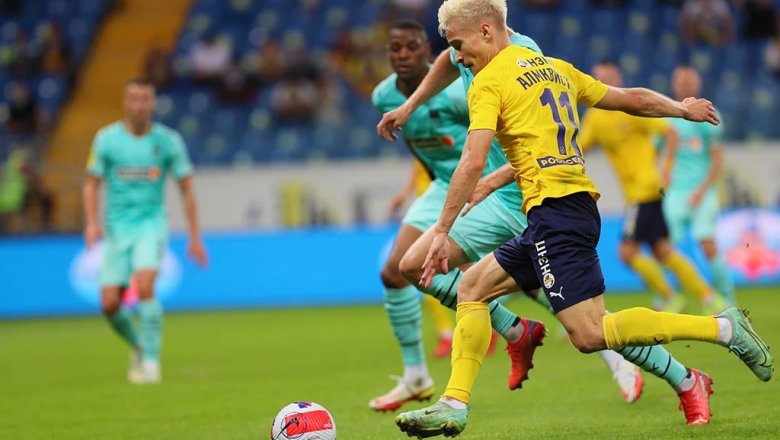 The capital, of course, can habitually look down on it, but the southern derby is one of the decorations of the RPL in recent years. With its own history, where there is an epic for Rostov and painful for Krasnodar final of the Russian Cup. The one, following which the first trophy in his career was won by Artem Dziuba.

There have been no boring games between yellow-blue and black-green lately, and each has its own intrigue. Even seemingly as banal as the goal at the end of the tour. Climb to the top of the table for Viktor Goncharenko or leave the joint zone for Yuri Semin. And it’s great that on the banks of the Don the stadium was allowed to fill up to a quarter of its capacity, and right after the City Day celebrated on Sunday, the fans finally got the opportunity to watch the game from the stands of the Rostov Arena. Not all, since the admission rules have changed, but already something.

At the very least, these are emotions for the team, which again hosted the top club and faced serious staffing problems. Norman is already in England, and Mamaev, Bayramyan and Kalinin are on sick leave. As a result, Semin gave a chance to 20-year-old Sukhomlinov, who last appeared at the start back in the July match with Dynamo – while watching the derby from the stands Valeria Karpin, and 18-year-old native of Rostov Langovich, whose entire experience in the RPL until Monday was calculated in 11 minutes with two substitutions.

Only the hosts were preparing for this, playing everything in training and in the recent sparring with their youth team, and what happened to Krasnodar in a few minutes is impossible to calculate. First – a crazy cut of Spaich into his own goal, when the opponent did not even impose, but rather indicated a struggle with a flank serve. A minute later – the removal of Krykhovyak, who in the center almost made it to the ball and received a second yellow card, stepping on his opponent’s leg with spikes.

The planned replacement of the injured Cordoba by Ilyin at that moment had to be canceled and released instead of the Colombian Spertsyan, in parallel shifting Ionov to the center of the attack. So this turned out to be not enough, and when Sergey Karasev, who was performing the functions of VAR, suggested to Alexei Matyunin that Almkvist hit Spaich’s leg instead of the ball, Cabella did not even hit the target from the 11-meter mark.

With such introductory notes, I wanted to understand how the bulls would save the game. After all, the guests needed to go forward with great forces in the minority, while Rostov was as wise as its head coach. I played by the score, not trite protecting the numbers on the scoreboard, but tried to wear out Krasnodar players with ball control in a positional attack and exploding with counterattacks on the spot. Something like in the episode when Komlichenko fell out on the left at the gate, but in the duel of the pupils of the Krasnodar academy he could not outwit Safonov. In this and several other moments, including the save in the last seconds, the goalkeeper seemed to prove to Vitaly Kafanov that in October the national team could not do without him.

Perhaps this was the key moment of the game, where Rostov had to exchange Hashimoto for Volmer during the break. That is, to lose part of the already modest stock of team experience. Meanwhile, anyone, including Ionov, can come up with something original and subtle in Krasnodar. The transfer of the Rostov defense to the equalizer Spurtsyan is one of the highlights of the round.

Everyone wanted to end it with a victory. Hence, the substitutions aimed at the attack, when Ilyin and Sow, who finally returned to service, entered the game alternately. But still, the scales did not swing in someone’s direction, remaining in a balance that did not suit anyone. Local tasks have not been completed, it is impossible to be completely satisfied, but it seems that positive can be found in this by no means peaceful draw. “Rostov” has shown that due to training and discipline it can beat the class of favorites with its own order, and “Krasnodar”, which they like to reproach for being soft by inertia, got out of the most difficult situation with dignity.