Ethereum’s hash rate hit an all-time high on Sunday, indicating that the worst effects of the crackdown in China are in the past.

Etherscan said the hash rate was 715.4 terahash per second on Sunday, while OKLink showed it was 677.9 TH / s. Both platforms said they were record highs. Since the end of June, the hash rate has been on an upward trajectory. Prior to the takeoff that led to today’s level, the all-time high was on May 19, when Etherscan recorded 632.8 TH / s and OKLink 604.5 TH / s.

Chinese cities and provinces have been grappling with crypto mining since the State Council took action on May 21. As miners turned off their mining rigs and tried to move their operations overseas, hash rates for both Ethereum and Bitcoin dropped. Many of these miners are currently running again. Eddie Wang, senior researcher at OKLink, also attributed the increase to a change in miners’ expectations. Miners and analysts expected the London Ethereum hard fork, which was implemented on August 5, would cause a drop in miners’ revenues, Wang said.

But strong demand for the network, with the minting of NFT tokens that carry high-priority fees, has kept miners from revenues, Wang said. Since mining has proven profitable since the hard fork, more miners are going online, according to Wang. 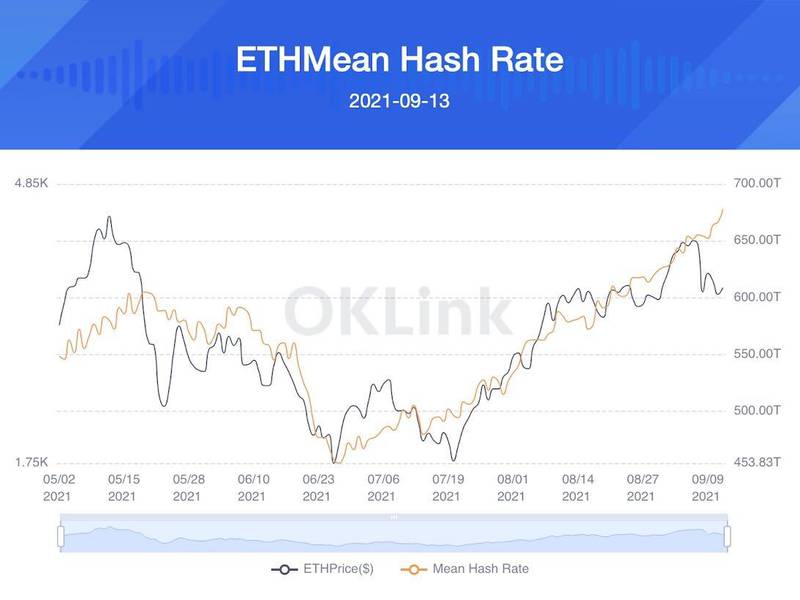