A new star lit up in the Russian championship – Hamid Agalarov… The leader of the attack “Ufa” has six goals and one penalty earned in seven rounds of the RPL. He tied for the top spot in the league’s best snipers list with Fedor Smolov… In addition, at the beginning of September, the 21-year-old striker played effectively for the youth national team of Russia: first he scored against Spain, and then scored a double and made an assist with Malta.

Hamid is the son of Anji’s rather famous midfielder Ruslan Agalarov, who at one time played about a hundred matches in the top division, and at the end of the 2001 season even made it into the list of 33 best players in the championship. Agalarov Jr. is also a pupil of the club from Makhachkala, for which he played until 2020. The striker made his debut in the RPL in the 2018/2019 season just as part of Anji, having played seven matches, but then, at the age of 18, he was not yet ready to play at this level and was not remembered by anything.

Then the Makhachkala club was sent because of debts to the PFL, where Agalarov began to show himself in adult football. Anji was going through a difficult period, the players did not see the money for six months, but Hamid scored five goals and made three assists in 15 matches and almost got into … Zenit! The young striker had the option of moving to the farm club of the champions of Russia, but, apparently, the St. Petersburgers were not satisfied with Anji’s demands. As a result, in January 2020, Agalarov was sold to Ufa for € 180,000 (according to Transfermarkt).

Ufa is, of course, an amazing club. Lacking serious financial capabilities, it repeatedly reveals little-known players in the RPL. Hamid is far from the first on this list. It’s enough to remember Andrey Lunev, Igor Diveev, Alexander Zinchenko, Danil Krugovoy, Daniil Fomin, Dmitry Stotsky, Oston Urunov and Ivana Oblyakov… True, at first Agalarov did not pull in Ufa. In the first 10 matches for the Ufa team, he did not score with effective actions, he was loaned to Volgar in the FNL. There, the striker has scored five goals in 14 games this spring.

And in the new season, Agalarov had a real breakthrough. Speaking about the strong qualities of Hamid, experts note the technique, acceleration with the ball, the ability to find free space and open between the lines, goal-oriented and goal-oriented flair, as well as the forward’s dedication. In general, Agalarov has a good set of qualities. In addition, he makes decisions quickly. 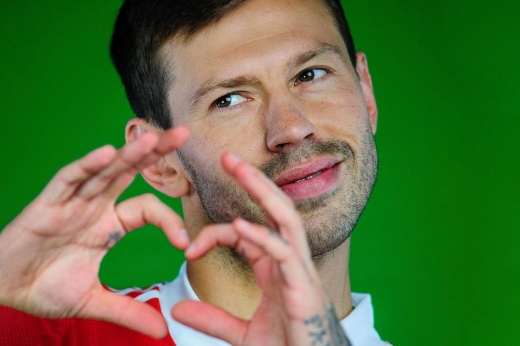 Smolov returned abruptly to the national team. But it’s not a fact that he will be the main one for Karpin

Hamid’s play is best illustrated with a video. He has scored various goals this RPL season. In the match against Dynamo, Agalarov scored a double with a score of 0: 2, when Ufa was left with ten men.

First, the striker successfully played on the finishing move – he sent the ball into the net, beaten off by Anton Shunin.

Then Agalarov made a great choice of a position in the opponent’s penalty area and shot a great touch from 6-7 meters.

In Nizhny Novgorod, Agalarov scored the first goal and earned a penalty in the episode with the victorious second goal of Ufa. Opening an account, the forward ran away from the owners’ defender Lucas Masoero and skillfully put the ball into the corner of the goal – the Argentinian fell behind and made a funny somersault (on the video – 03:32). In the episode from the penalty spot, Hamid reacted to the rebound in time, being in time for the ball earlier Artur Nigmatullina… The goalkeeper was forced to foul (on video – 04:35).

In a meeting with Zenit, Agalarov’s goal saved Ufa from defeat. After intercepting the ball and passing to the area of ​​the “point”, Hamid struck a touchdown into the far corner (on the video – 03:14). Again, it is worth noting the speed of decision-making – the attacker did everything without wasting a second.

Agalarov struck the gate of Wings of the Soviets from the penalty spot. His goal with a score of 0: 2 returned the Ufa team to the game. Hamid shot into the top corner so that the goalkeeper Ivan Lomaevguessing the direction of the blow, he could not reach the ball (on the video – 04:05).

Today Agalarov scored from the “second floor”. Command Alexey Stukalov lost 0: 2, went on the attack and in the 50th minute used a rare chance. Bojan Jokic hung from the left flank, and Hamid hit his head well from 11 meters.

As for Agalarov’s goals for the youth national team of Russia, he scored in Spain, provoking the defender’s pressure to an unsuccessful pass back. After that, he picked up the bounced ball, threw it over the goalkeeper and sent it into the net. By the way, celebrating the goal, Hamid kissed a T-shirt with the emblem of Russia. The first goal for Malta is the result of the fact that Agalarov famously opened up behind the backs of the opponent’s defenders. The second is a stunning blow to the back of the head after serving from the left flank.

Agalarov looks like a modern-type striker. The Russian national team lacks such. If he does not slow down, but will consistently score throughout the season, then he will definitely not stay in the youth team – Valery Karpin will call the scorer.