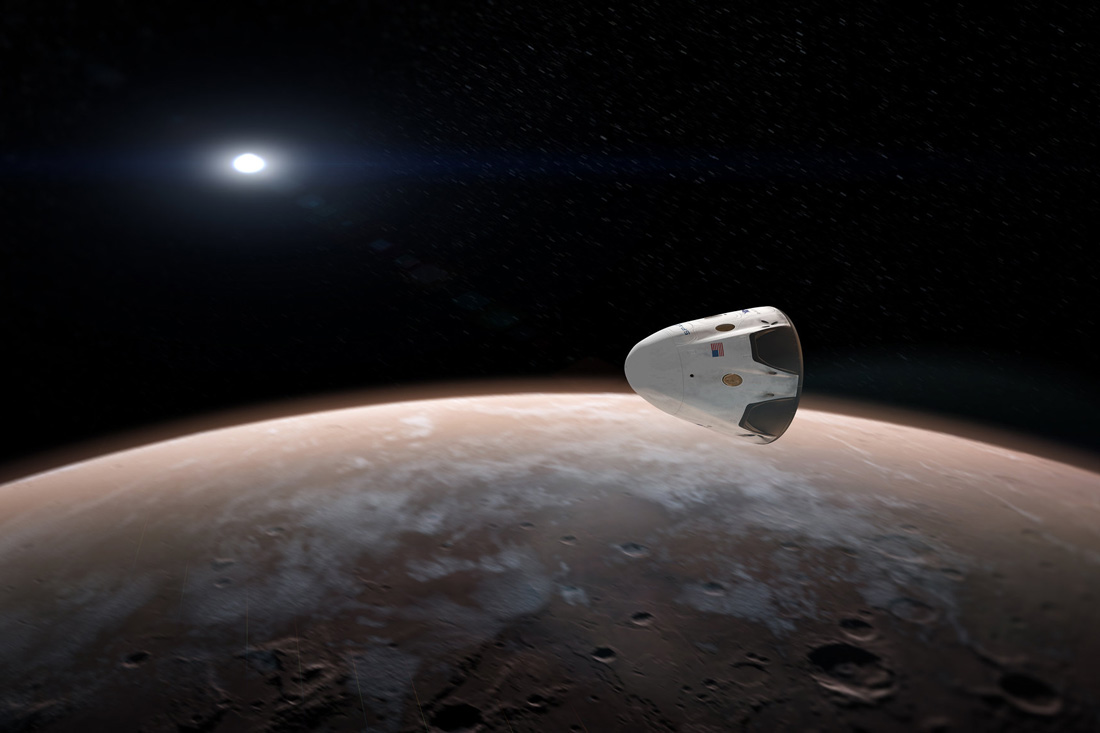 One can often come across judgments that a flight to Mars is dangerous or impossible due to cosmic radiation. This even became a topic for jokes, but quite authoritative people, from astronauts to presidents, continue to express this. At the same time, these fears do not stop dreamers who want to build a Martian rocket or plan to move. What do we know about the radiation hazard of Martian flights? 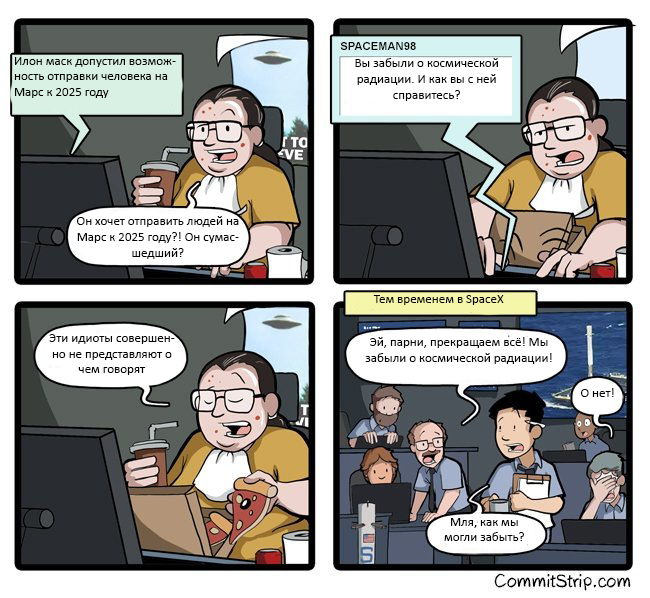 Today, there is extremely limited experience of manned flights of people in interplanetary space. Only twenty-four people made expeditions outside the Earth’s magnetosphere in the Apollo program, but lasting no more than two weeks. To fly to Mars for about six months in one direction. Therefore, today the source of knowledge about radiation threats from other planets is research on board the near-Earth International Space Station, a few statistics of lunar flights, dosimetric measurements on interplanetary probes, ground-based experiments on animals, and estimates based on mathematical models.

Radiation is called ionizing radiation that is emitted in space during events associated with the release of energy: processes on the Sun, supernova explosions, accretion disks of black holes, emissions of quasars … According to its physical properties, radiation can be divided into photon radiation – X-rays and gamma rays; and corpuscular radiation – electrons, protons, alpha particles, heavy charged particles, secondary neutrons. According to the source, cosmic radiation is divided into solar and galactic (including extragalactic).

The separation of these types of radiation is extremely important for understanding the specifics of interplanetary flights. For example, in terrestrial nuclear power engineering it is necessary to take into account, first of all, gamma and neutron radiation. In space, gamma is insignificant, and neutrons arise only from the interaction of cosmic rays with the atmosphere, soil or the hull of a ship. But in outer space, the most dangerous particles are protons (nuclei of a hydrogen atom), alpha (nuclei of a helium atom) and nuclei of atoms of heavier elements.

The Earth still has radiation belts, but a ship starting into interplanetary orbits crosses the most dangerous part of them in just half an hour, so they can be neglected in the context of long flights. The radio belts themselves have already been discussed earlier.

When assessing radiation exposure, now usually two units are used: grey the energy of the absorbed radiation is measured, and in sievert – the biological equivalent of this radiation. The difference between them is in the factor, which has an excellent name “quality factor”. It means how detrimental to the body is the effect of radiation. For example, the same dose of gamma radiation and neutron radiation in sieverts in grays will differ up to twenty times – neutrons are much more dangerous, i.e. higher is their quality factor.

How do we know about interplanetary radiation?

In astronautics, several different methods of recording radiation are used, some show the background in real time, while others accumulate the effect and allow you to estimate the total dose. For example, the Soviet lunar “Probes” were carried on board the so-called. “Nuclear photographic emulsions” – a photographic film sensitive to radiation, the development of which made it possible to estimate the dose accumulated inside the descent vehicle of the ship. 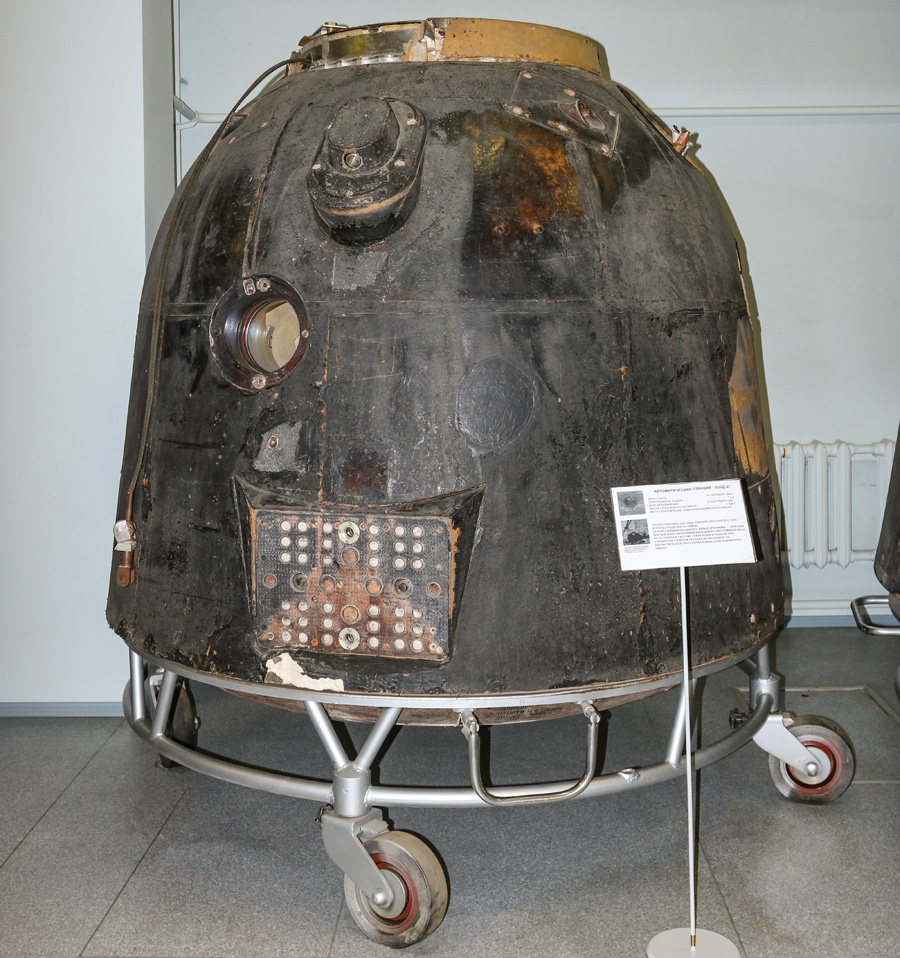 Apollo astronauts wore active dosimeters based on a gas discharge chamber, and passive thermoluminescent and polymer detectors on their bodies. 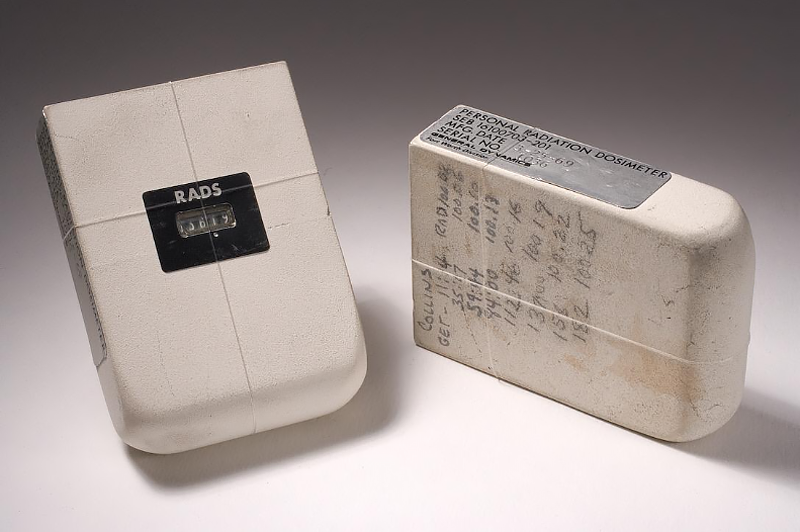 Nowadays, semiconductor silicon detectors are most often launched on the ISS and lunar spacecraft.

They began to study radiation near the Moon and on the Moon even before manned flights. So, the first successfully landed automatic station “Luna-9” carried a Geiger counter on board, the orbital “Luna-10” also carried several detectors for different types of radiation. The Americans carefully recorded the radiation conditions on the way to and near the moon in 1966-67 in many months of observations on five Lunar Orbiter spacecraft.

Dosimetric studies were carried out on orbital vehicles of our century. Indians counted the dose as a Bulgarian dosimeter on the Chandrayaan 1 apparatus in 2008. NASA has been collecting data with a dosimeter on the LRO for five years. A year ago, the Chinese also published their results from the lunar surface. 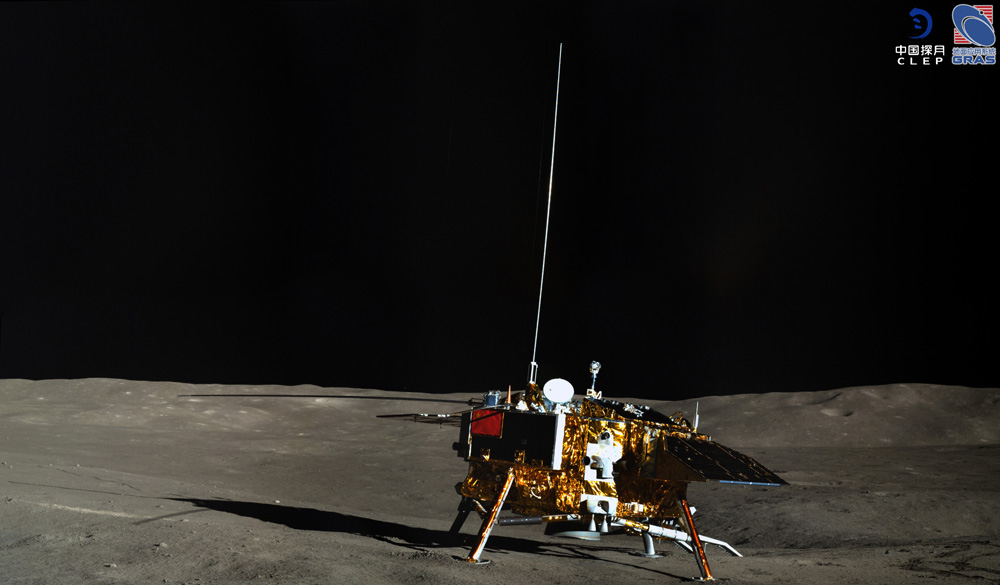 The automatic interplanetary station Rosetta flew even further. It flew close to Mars and flew away to the orbit of Jupiter, in its pursuit of the comet 67P Churyumov-Gerasimenko. 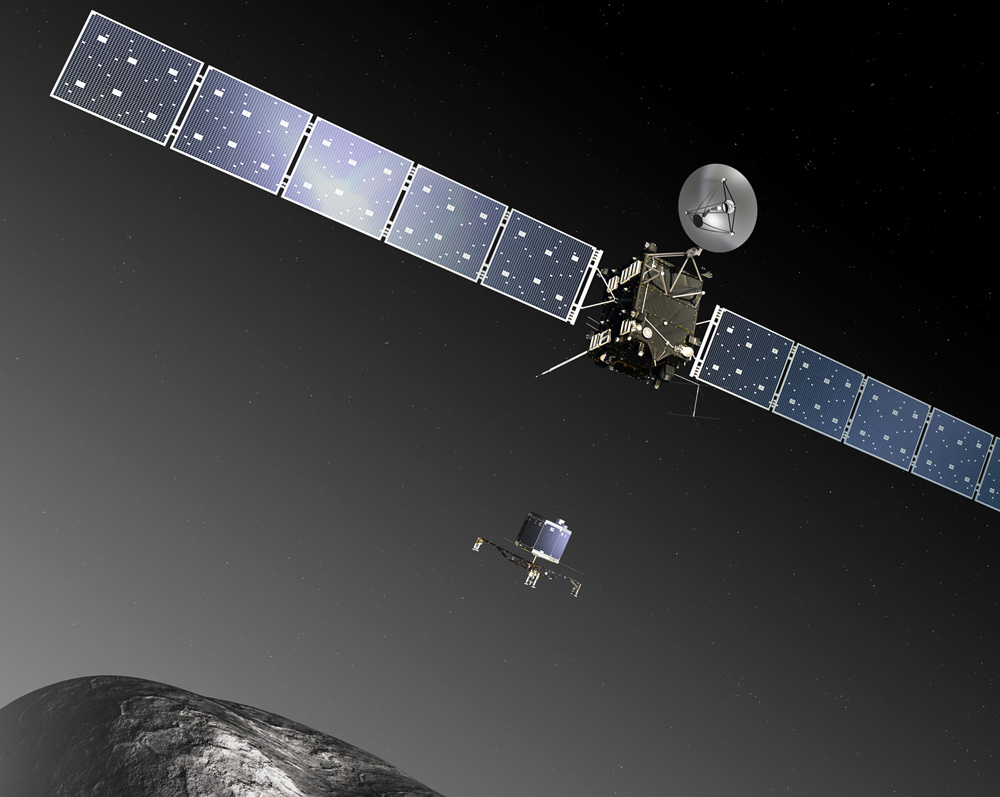 What is the dose in interplanetary space?

I summarized the data from the above devices in a general table. The specified shielding thickness in terms of aluminum is an average value. So, on ExoMars, the detector on one side covers a couple of millimeters of aluminum, and on the other – a couple of meters of the entire four-ton probe. Curiosity is slightly better – it flew in an aerodynamic canopy, which in its shielding properties does not differ much from modern-type manned spacecraft. 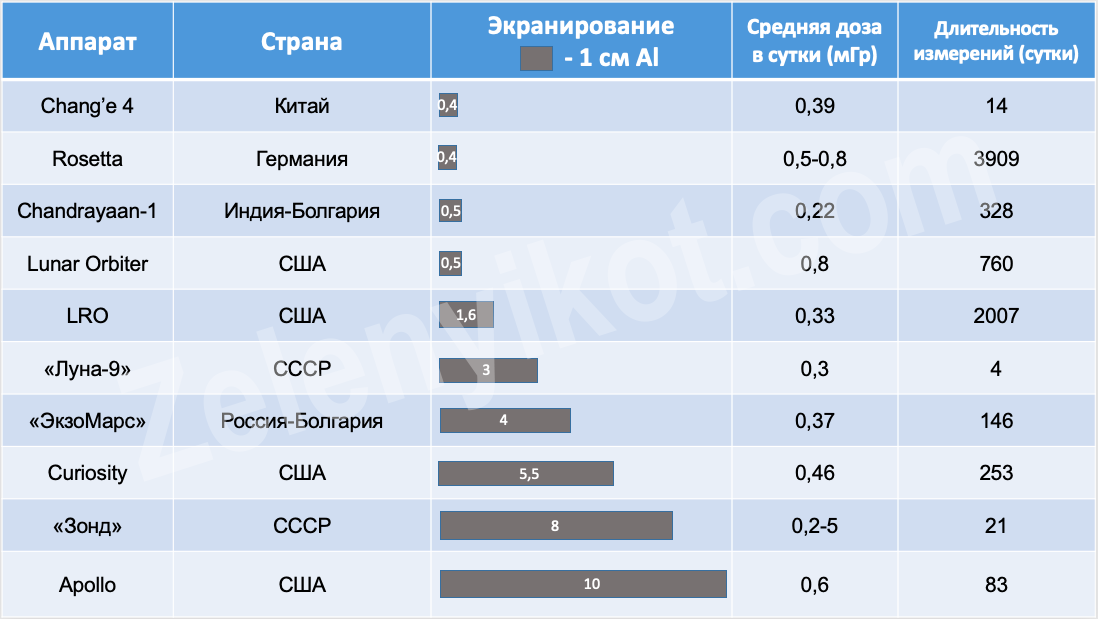 The daily readings in the table are also averaged, for example, the increased dose of the Apollo crew compared to the rest is the result of repeated crossing of the Earth’s radiation belts. Data on the “Probes” were taken from two sources where the data differ several times. In all other cases, the American data do not contradict the measurements of the instruments of other countries, which makes the supporters of the lunar conspiracy suspicion of false readings in the Apollo program unfounded.

In general, a rough approximation, without taking into account background fluctuations due to solar activity, allows us to state that the average dose in interplanetary space is about 0.5 milligrams per day… In biological terms, this is about 2 millisievert… Approximately so much the average inhabitant of Russia receives in six months, and the crew of the International Space Station in 3-4 days. High, but not fatal.

Experts from the Institute of Biomedical Problems of the Russian Academy of Sciences have estimated the total dose for a round-trip flight to Mars at less than 0.7 sievert in 350 days. According to modern radiation safety requirements for Russian cosmonauts, an accumulation of a dose of 1 sievert is permissible over their entire career, which increases the risk of cancer during their life by 3%. It turns out that from the point of view of radiation safety, you can fly to Mars and return only once.

For example, cosmonaut Gennady Padalka flew to the ISS for 878 days, and, in terms of radiation exposure, flew to Mars and returns home. 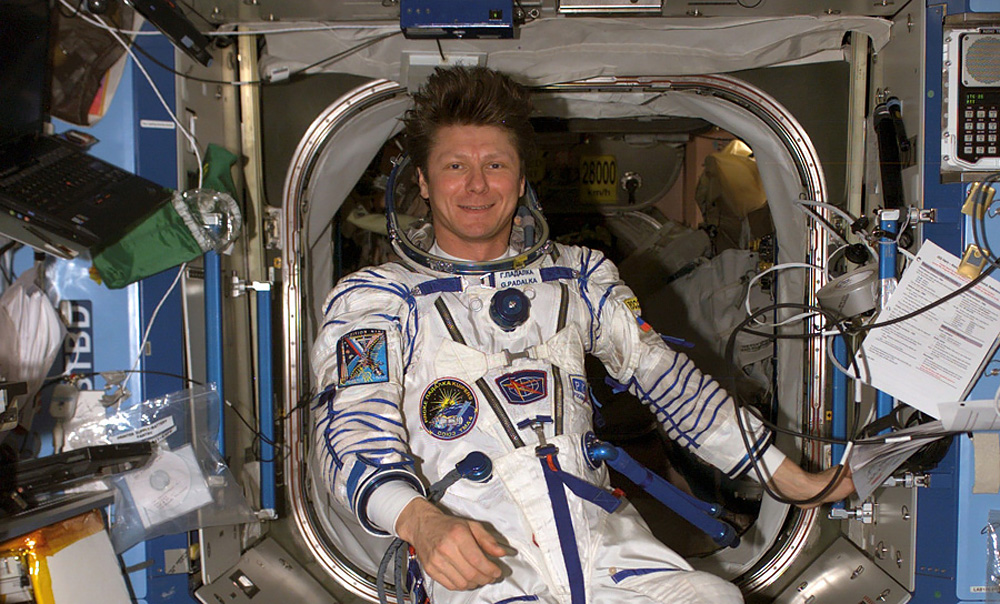 The dose on the surface of Mars is a topic for a separate analysis.

Since the effects of long-term exposure to interplanetary radiation on humans have not been studied, some scientists are training in mice and rats. However, their results should be treated with caution, the correctness of the set experience is important. Several years ago there was news that the analogue of cosmic radiation damaged the brains of mice and they became stupid. If you delve into the details, it turns out that the brains were fried to the mice at 1 milligray per day (that is, twice as much as the dosimeters in space show) and exclusively with neutrons (which have a quality factor 5 times higher than that of the cosmic background). As a result, the experimental animals received a dose ten times more than expected on a manned expedition.

The data on the deaths of participants in lunar flights show an increased percentage of deaths from cardiovascular diseases, compared with near-Earth astronauts. But so far the sample is too small for far-reaching conclusions (seven cases), and it is too early to talk about a direct threat to the interplanetary environment. Although experiments on mice have also shown that the combination of simulating weightlessness and irradiation with heavy charged particles can harm the cardiovascular system.

Can you protect yourself from cosmic radiation?

Let’s remember that we have two types of radiation: solar and galactic. Although the composition of these cosmic rays is approximately the same – protons, alpha, and heavy nuclei – they differ in quantity and energy. There are more solar charged particles, but their energy is lower, and this difference determines the difference in the means of protection.

There is a widespread stereotype that solar flares are the main danger in space. But if we study the data from measurements of Curiosity, LRO and Rosetta outside the near-Earth magnetic field, it turns out that the contribution of solar flares to the total accumulated dose of spacecraft does not exceed 25%. Together, these three vehicles have been in space for more than 15 years, that is, considerable statistics have been collected, but none of them fell under a powerful solar flare, which happens about once every 10 years, like that which happened on August 4, 1972. According to the simulation results, such an outbreak is capable of giving the crew up to 4 sievert in a few days, and this is radiation sickness with the risk of death (although this dose was considered acceptable for the Apollo crews). True, in the simulation, 4 sieverts were counted for the contents of an aluminum sphere 2 cm thick, and on average, a fully equipped spacecraft, such as the Apollo command module or the Russian ISS Zvezda module, shields about 10 cm of aluminum, which would reduce the dose several times.

Solar flares are dangerous, but you can defend against them. We know this thanks to the automatic interplanetary station Rosetta. She had two dosimeters on board, one on the sunny side, the other on the shady side. When a powerful solar flare flew into the probe, the irradiation of the illuminated device increased significantly, while the shadow one showed only insignificant fluctuations. 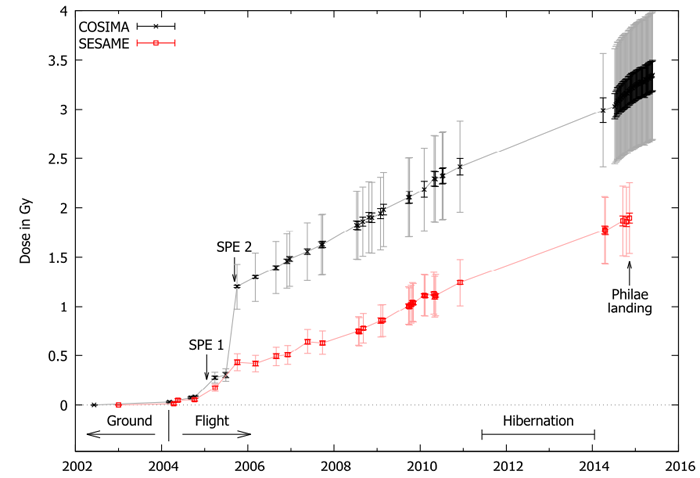 Close observation of the Sun can predict the most dangerous flares – solar proton events – in about a few minutes. They should be enough to orient the flying Martian ship with its “tail” to the Sun, and to protect the crew. Much more dangerous are powerful flares during a spacewalk, and here the space weather observation service turns out to be vital. 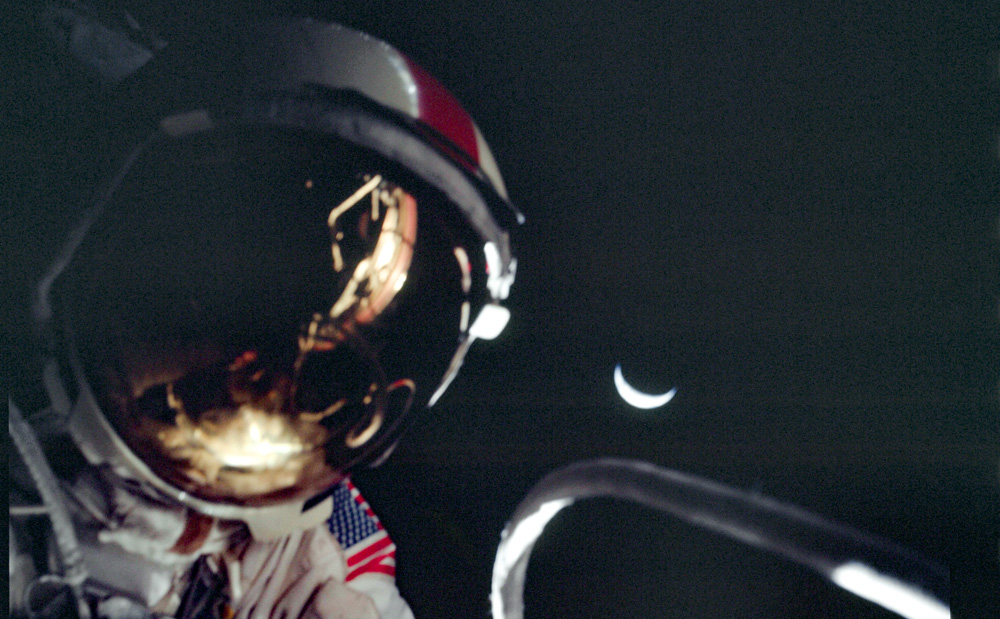 Despite the serious danger of powerful solar flares, they are not the main problem in interplanetary travel. The main radiation damage during a flight to Mars comes from galactic cosmic rays, and there is no man-made protection from them. They are capable of stitching at least 10 cm, at least 50 cm of aluminum, and fly from all directions, so it will not be possible to hide behind a ship. And here our only help is solar flares! More precisely, the solar wind is low-speed streams of solar charged particles that carry magnetic fields with them from the center of the solar system to the heliopause, where interplanetary space ends and interstellar space begins.

Even in the pre-space era, registering the fluxes of secondary charged particles in the Earth’s atmosphere, scientists noticed that their intensity decreases during periods of high solar activity. It turned out that the solar emissions of charged particles and magnetic fields slow down and scatter galactic rays. This phenomenon was named solar modulation of galactic cosmic rays, and a short-term drop in the intensity of galactic radiation during solar flares is the “Forbush effect”. The difference in the interplanetary radiation background, depending on solar activity, changes two to three times: solar maximum lowest dose… Measurements Curiosity and ExoMars were carried out approximately in the middle of this cycle, and people flew to the moon during a period of higher solar activity. 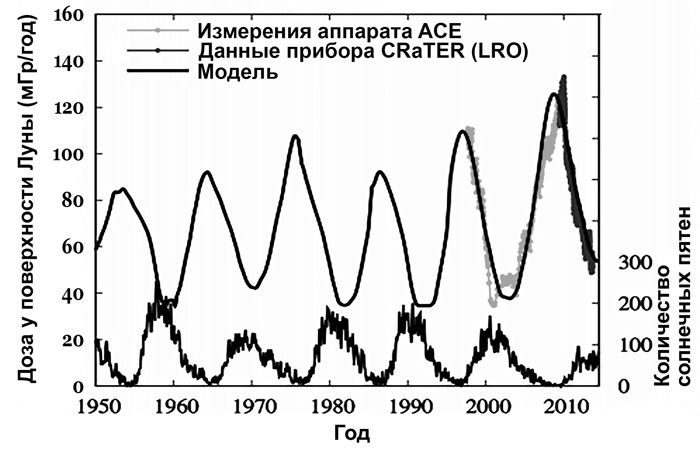 Summarizing all the data, it is now clear, in order to ensure the most radiation safe flight to Mars, several conditions must be met:
– reduce the duration of the flight as much as possible;
– fly during the maximum solar cycle;
– turn the engine compartment and fuel tanks towards the Sun;
– overlap with equipment, food and water supplies around the living quarters.

Your support will help in preparing new posts!
Subscribe to Patreon or the domestic analogue “Sponsor” and I can talk more about space.