Mario Fernandez, one of the strongest players with a Russian passport, announced his decision to end his performances for the Russian national team. Sportbox.ru – about the role played by the CSKA footballer in our national team, about his possible successors and new problems for the head coach.

Many copies have been broken on the topic of naturalization of legionnaires and their performances for the Russian national team. Is it possible to fill problematic positions in this way, what conditions must be met for this, how does this affect the image and identity? From a purely football point of view, Fernandez is the only foreigner whose place in the national team has never been in doubt. From his debut for the national team in September 2016 until the last match in a double-headed eagle jersey against Croatia on September 1, 2021, the CSKA representative was the best choice on the right flank. Nominally – defense, but in fact – the entire edge.

Fernandez is one of those players with a Russian passport, whose rumors about his transfer to a strong club in the top league did not cause skepticism and public ridicule. In the summer of 2019, its estimated value according to transfermarkt.de reached 30 million euros. Taking into account the rapid growth of market prices before the pandemic, this is perhaps not the maximum amount for the professional qualities of a Brazilian who works from and to the entire edge, acting as one of the engines of the attack, fast, technical, always ready to fight. Mario is a quality example of a modern attacking full-back, who would certainly not be lost in the Brazilian national team.

That is why the regularly pop-up topic of a player’s poor knowledge of the Russian language has never turned into a scandal. And the goal scored by Fernandez of Croatia in the quarterfinals of the 2018 World Cup in the second extra half is remembered with a breath. Although the national team lost in the penalty shootout, the same naturalized Russian missed the decisive penalty (he, not Smolov!). But there were no complaints about Mario, because his dedication and the quality of the game were beyond doubt. 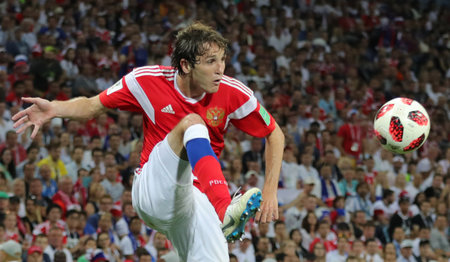 For five years in the Russian national team, Fernandez played in 33 matches, scored 5 goals. This entire period, with the exception of the last meeting, was held under the leadership of Stanislav Cherchesov. Our team, as the host of the World Cup, did not participate in the selection, and the Brazilian missed the Confederations Cup that preceded the main tournament due to a broken nose. Therefore, the first official match of Fernandez took place already at the world championship, where he played in all five meetings and only in one, against Uruguay, which had already decided nothing, was replaced. In the future, Mario could not play the full match, only if it was a friendly (control, as Cherchesov insisted), completely passed or no longer had a tournament value.

In the first half of the meeting with Finland (1: 0) at the last Euro 2020, Fernandez jumped high in someone else’s penalty area and after contact with an opponent fell terribly downward, meeting the lawn with his neck and shoulder. They helped him for a long time, carried him away on a stretcher, took him away in an ambulance. It seemed that the European Championship for the right-back was over, and now he will not be able to play for CSKA anytime soon. But he entered the field at the start already in the next round of the group stage against Denmark (1: 4).

In a farewell letter to the fans of the Russian national team, Fernandez explains the reason for leaving:

Health really worries Mario. So last season, for completely different reasons, including injuries to the back, hips, face, groin, as well as the scourge of modernity, the coronavirus, he missed a total of nearly three months. In August, he doubted whether to go to the national team. After talking with the new head coach Valery Karpin, he arrived at her location and got a knee injury in the first meeting. In this regard, the argumentation raises no questions.

As for the road to young footballers, this is more of a common figure of speech. Mario will only turn 31 on September 19. This is a respectable age for a football player, but far from retirement. Yes and no behind him a line of young and daring. After the departure of Fernandez and Yuri Zhirkov, the flanks of the Russian national team became an obvious problematic place, as our observer Andrei Kolesnikov discusses in detail in a separate article.

Karpin, the flanks and the other team, or did you get excited with Zhirkov?

Here, without going into details, we note that of the experimental collections on the right, only Vyacheslav Karavaev remains, who, in the presence of Fernandez, was used by Karpin, and earlier by Cherchesov on the left. Both mentors tried on the right flank of the universal midfielder Daler Kuzyaev, who himself repeatedly said that he feels more comfortable in the center. Sergey Petrov, Igor Smolnikov and Vladislav Ignatiev also have experience of playing for the national team, but the last two are already well over thirty, and the first is the same age as Fernandez and suffered a serious injury last season. Fedor Kudryashov received a call from Karpin, but was not included in the final list due to lack of playing practice.

Among the young players, one can consider the candidatures of Dmitry Rybchinsky, reprofiled at Lokomotiv, or Nikolai Rasskazov, who returned to Spartak, but it is perhaps unnecessary to explain why these options are now risky and far from obvious.

Fernandez’s departure from the national team at a tense moment of selection for the 2022 World Cup is, of course, a serious loss for a team that is building on new patterns. Another problem with the already long roster of a new head coach. And it is vital to solve it already by the next selection series. In October, the Russians will face the most important meetings with Slovakia and Slovenia, which have not yet given up their hopes for second place in the group.