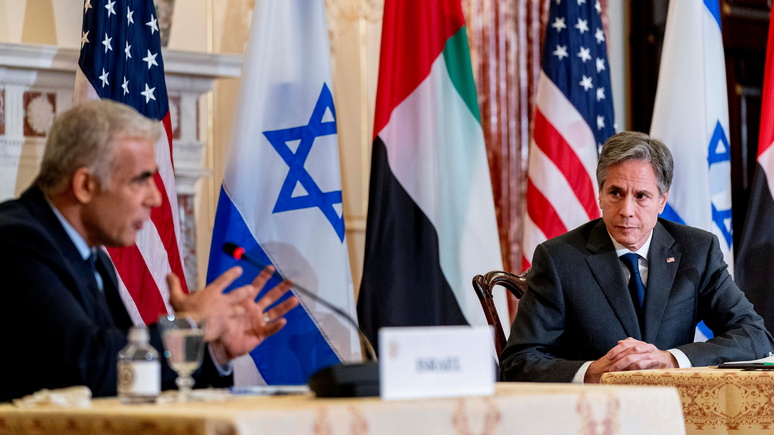 Washington and Tel Aviv are ready to switch to alternative methods to resolve the issue of Tehran’s nuclear program in the event of a failure in negotiations to restore the Iranian “nuclear deal”, said the heads of the diplomatic departments of the two countries Anthony Blinken and Yair Lapid. According to The National Interest, officials did not specify what Israel and the United States were planning for “Plan B” against Iran – however, we can talk about both additional sanctions and cyberates or other covert operations.

US Secretary of State Anthony Blinken and Israeli Foreign Minister Yair Lapid announced last Wednesday that if negotiations with Iran in Vienna on a return to the Joint Comprehensive Plan of Action (JCPOA) do not lead to any tangible result, Washington and Tel Aviv will move in terms of resolving the issue of the Iranian nuclear program to a certain “Plan B”, noted the journalists of the National Interest.

As specified in the publication, Blinken and Lapid said that if Iran does not want “In good faith” return to the negotiating table, America and Israel have “other options” actions regarding Tehran’s nuclear program.

What is “Plan b”, officials did not specify, however, both countries have already demonstrated in the past that they have “A whole arsenal of tools besides diplomacy”ranging from tougher economic sanctions to cyberattacks and other covert operations, writes the NI columnist.

“Although the administration of US President Joe Biden has previously indicated that it seeks primarily to return to the ‘nuclear deal’ and reach new agreements with Iran through good faith diplomacy, other options are likely to help Washington achieve its goals through negotiations.”, – the author argues. On the other hand, the use of covert operations in the event of a failure in negotiations will definitely be a failure for Biden’s team, since it will show that they have never been able to find a diplomatic solution to the problem, he emphasizes.

While Blinken and Lapid’s words did not indicate any major policy shifts in Washington and Tel Aviv, officials essentially acknowledged that the governments of both countries were considering “alternative approaches “ in case of the Vienna debacle, the NI report says.

As the journalist reminds, although Israel did not participate in the JCPOA, it is Iran’s main rival in the region, and therefore is interested in containing the Iranian nuclear program. Former Prime Minister Benjamin Netanyahu was one of the most ardent opponents of the agreement: before its ratification in 2015, in his address to both houses of the US Congress, he spoke out strongly against the deal. However, some commentators in the United States called this speech a “political trick” to raise Netanyahu’s rating ahead of the Knesset elections, held two weeks later, the author notes. Meanwhile, the current Israeli Prime Minister Naftali Benet, who criticized the JCPOA earlier, as a minister in Netanyahu’s cabinet, has so far refrained from openly condemning the agreement since taking office, the journalist writes.

Though “in theory” negotiations between Washington and Tehran in Vienna are still ongoing, in fact they have reached a deadlock, writes The National Interest. Iran had previously expressed its readiness to take part in them, but did not say exactly when it would join them, and in the meantime, the Iranian authorities began to violate the uranium enrichment limits established by the JCPOA. Because of this, Mr. Blinken said that Tehran has less time to restore the “nuclear deal”, but he also did not indicate any specific dates.