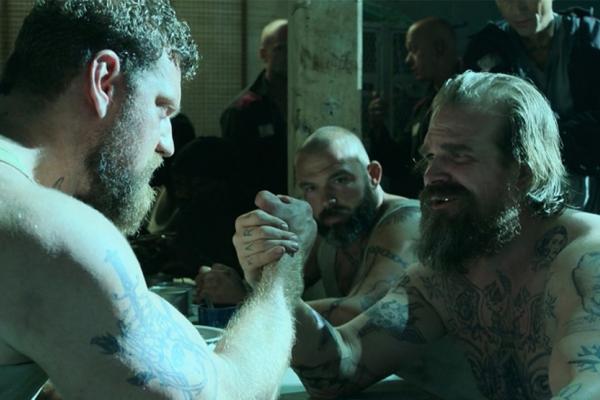 Judging by the scene with the Red Guardian, the hero has no supernatural abilities yet.

Shot from the film “Black Widow”

Olivier Richters unexpectedly confirmed that his character in Black Widow starring Scarlett Johansson is the first mutant in the MCU.

Richters played one of the prisoners in the prison, the powerful guy Ursu. And on his Instagram, Richters said that this is actually a mutant Big Bear, which turns into a huge ferocious bear in Marvel comics. I even included a few pages from the comics with my character. He writes this:

“After two years, I can finally say that my character is Big Bear, a mutant who appears in the MCU.”

In the commentary, Olivier Richters also recalled the history of Big Bear. He wrote that in the comics, the mutant is part of the Winter Guard team – the Russian version of the Avengers. After transforming into a huge bear, Mikhail Medvedev becomes very strong, and he, he says, is larger than the Hulk himself. The actor also admitted that he was happy to be a Marvel superhero. Richters is now hoping Marvel Studios will bring it back and show it in “Full form”…

The artist also recalled that the Scarlet Witch / Wanda Maximoff (Elizabeth Olsen) received her supernatural powers as a result of the experiments of Hydra. In his opinion, she and her brother Mercury / Pietro (Aaron Taylor-Johnson) were not the first MCU mutants, although they are mutants in the comics.

It is worth emphasizing, however, that in Wanda / Vision it was hinted that the heroes have a genetic potential that allowed them to pass the tests. A flashback with young Wanda made it clear that she had supernatural abilities from birth, experiments with the Infinity Stone allowed her to reveal and strengthen them.

Big Bear in Black Widow doesn’t seem to have superhuman strength, as the Red Guardian (David Harbor) calmly broke his arm. Although, perhaps, Alexei Shostakov is simply stronger. Or Ursa has yet to reveal her super powers. One way or another, and after the merger of Disney and FOX, Marvel Studios received the rights to the X-Men, so in future projects we should expect a full-fledged introduction of mutants into the MCU, things will not be limited to hints.

On the topic: “Black Widow”: explanation of the ending, answers to the main questions, Easter eggs and what will happen next