On Monday, November 22, 2021, US President Joe Biden nominated Jerome Powell for a second term as head of the Fed. In turbulent times for the market, investors prefer continuity and stability. In this regard, we can say that the fog of uncertainty about the Fed’s actions to normalize monetary policy in 2022 has become less dense. Therefore, we decided to understand the situation in more detail.

In this article we will tell you that:

Two of the casket are not the same from the face

Jerome Powell was not the only candidate to run the Fed for the next 4 years. His main rival was a member of the Federal Reserve Board of Governors Lael Brainard, who was later promoted to the post of Deputy Chairman of the Federal Reserve Board, the second most important economic position in the United States. However, the final word now belongs to the US Congress. We expect both candidates to be approved with a high degree of probability.

In terms of views on monetary policy in the United States, both candidates adhere to “dovish” rhetoric, but Lael Brainard is softer on this issue, but advocates stricter regulation of the banking system, and also shows increased interest in the fintech industry and the digitalization of the dollar. It is worth noting that in June 2020, Lael Brainard was the only member of the Federal Reserve Board (Democrat) who spoke out against changing the Walker rule, which prohibits the purchase and sale of securities with the own funds of large banks. Lael Brainard is also launching an initiative to increase the countercyclical capital buffer for banks.

Changing the head of the Fed is stressful for financial markets. Joe Biden decided not to tempt fate with already low political ratings and nominated for the post of head of the Fed a person with an understandable strategy of monetary policy, as well as less aggressive towards large financial holdings, namely Jerome Powell. The market immediately reacted ambiguously, namely:

However, in general, the broad market index, the S&P 500, fell by 0.3% at the end of the trading session due to the decline in index heavyweights. 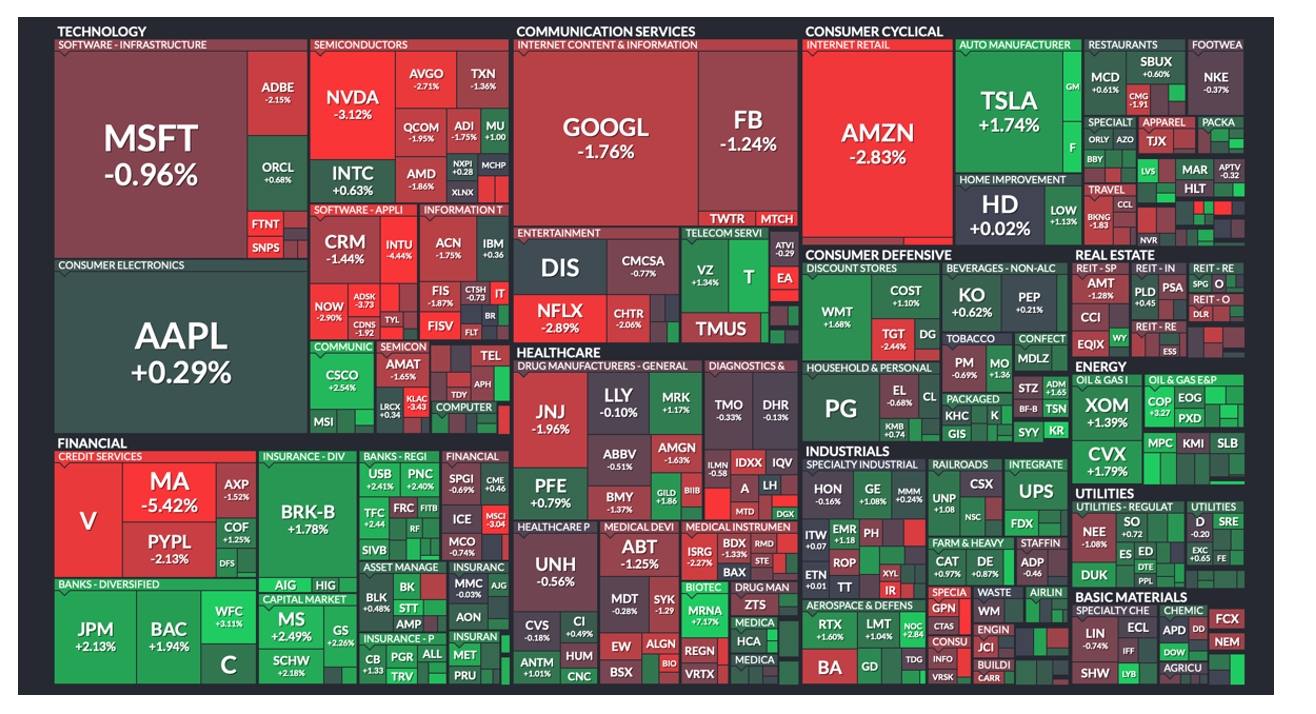 Powell Can Drive Yields Above 2%

The US President gave the investment world a sense of stability for the next 4 years, as Jerome Powell must normalize monetary policy in the country.

However, the energy crisis in China, as well as the still disrupted supply chains, only accelerate inflation, which should push for a faster start to winding down emergency stimulus already at the meeting in December, and as a result, the yield on 10-year bonds will accelerate their growth to 2%. In the baseline scenario, the monthly decrease in emergency incentives is $ 15 billion, which is equivalent to ~ 8 months. A faster easing of stimulus will lead to a revision of expectations for a rate hike earlier than June 2022. This will directly have a negative impact on the market. It is worth noting that with the appointment of Powell, the probability of 3 rate hikes in 2022 reached a record level of 93.7%. 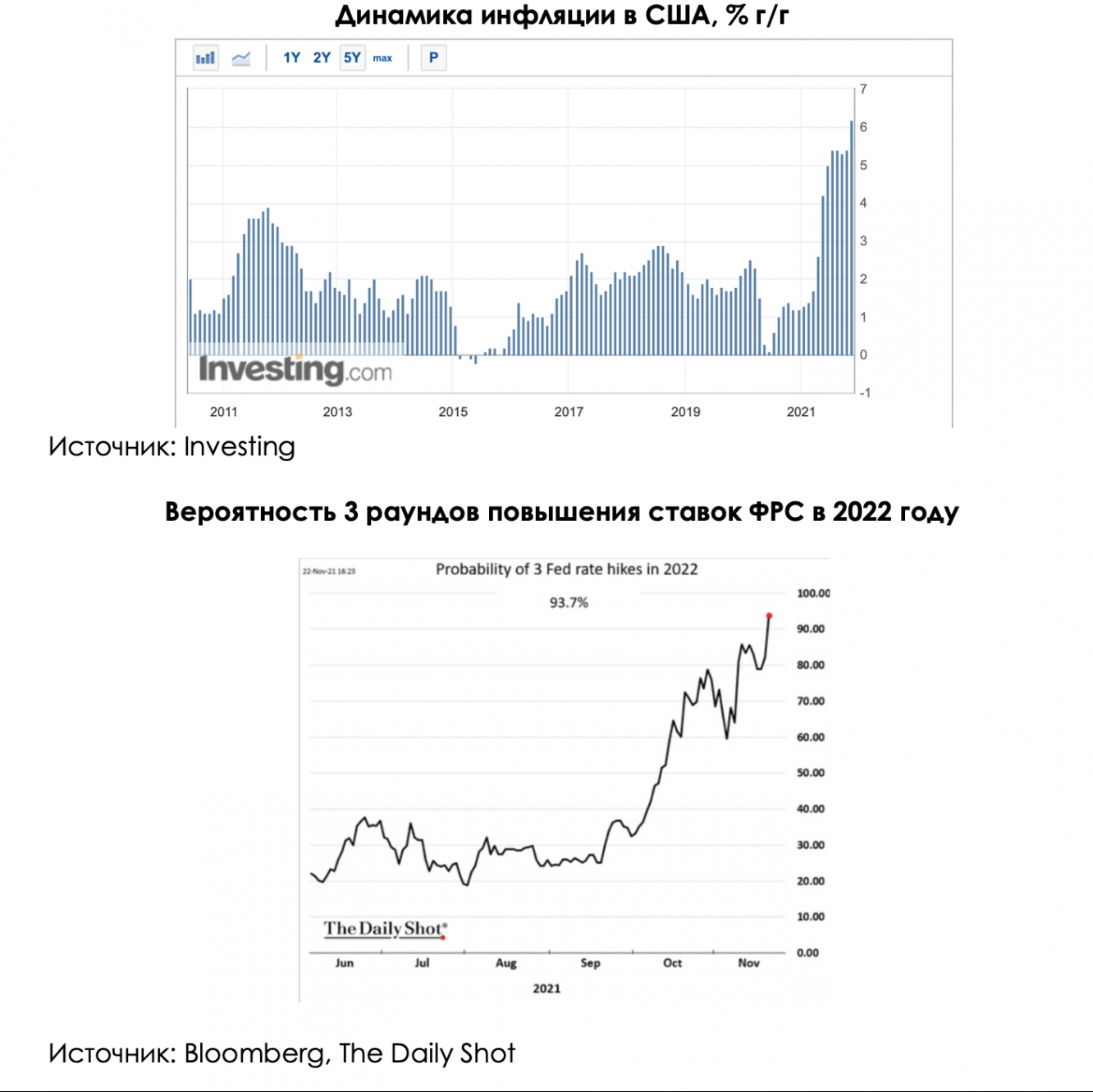 How to prepare for higher yields?

The most vulnerable stocks in an investor’s portfolio right now are growth stocks or stocks with overheated multiples. The withdrawal of liquidity from the market and the growth of interest rates have a negative impact on the dynamics of such securities. For example, with an increase in the required yield, future cash flows are now losing their value, and the valuation of companies is decreasing. Leverage should also be reduced to reduce portfolio risk. A logical movement now looks to be the transition of some assets from growth stocks to value stocks with less overheated estimates and low beta to the market.

Let’s refresh. Value stocks are companies that are capable of generating stable cash flow even in the face of slowing economic activity. In which sectors are value stocks predominant?

Jerome Powell’s nomination as Fed chairman by President Joe Biden was a strategically correct decision, as changing the most powerful financial position always introduces the volatility that is already prevailing in the market, given the fragile economic recovery from constraints, still disrupted supply chains and high inflation. … Powell’s rival Lael Brainard, who was nominated to the position of Deputy Chairman of the Fed’s Board of Governors, also did not stand aside. Both of these figures complement each other perfectly, although they have almost identical views on the rhetoric of monetary policy in the country.

The investor needs to be prepared for a faster winding down of bailout stimulus and an early hike in the Fed’s rate. The most vulnerable candidates right now are growth stocks or securities with overheated multiples. Also, the investor should reduce the level of his financial leverage in the portfolio to eliminate excessive portfolio volatility.

The article was co-authored with analyst Andrey Kurapov