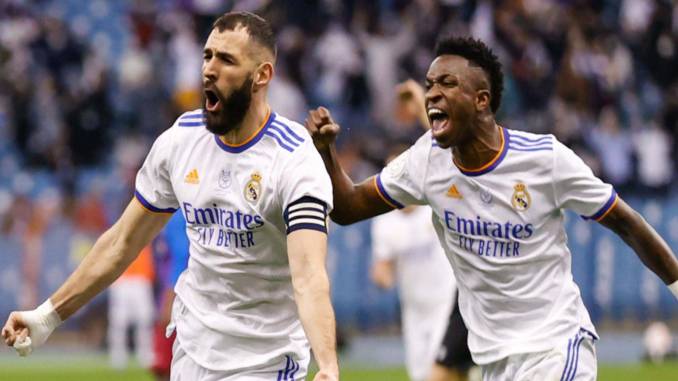 Barcelona and Real Madrid face off for the Spanish Super Cup

Real Madrid and the FC Barcelona face this Wednesday in Riyadh in the semifinal of the Spain Supercup, in the first classic of Xavi Hernandez as a Barça coach in search of his first title at the helm of Barça.

The Super Cup returns to Arabia two years after Real Madrid beat Atlético on penalties in the 2020 final in Yedá (east), playing the 2021 edition in Spain for the pandemic.

The trophy will play its third edition in its new four-way final format, which will face the second-placed merengue team from the last league against Barça, current Copa del Rey champions, in the first semifinal.

The two matches will be played at the King Fahd Stadium in Riyadh, which will also host the final of the trophy next Sunday.

Today’s classic between the white team and the culé team will begin at 1:00 pm, Honduras time. You can see it through the SKY Sports signal and follow it online through the Diario LA PRENSA website.

The merengue team, current leader of the Spanish championship, seems to arrive in a better position than its Barça rival, sixth in the championship in Spain, 17 points behind Real Madrid.

Xavi Hernández will debut in one as a coach, after many disputed as a player, trusting that it will serve as a boost to his project.

“For us it is a challenge, an opportunity to play in a final for a title and it could be a turning point,” said the manager of the Blaugrana team at a press conference.

The Spanish Federation (RFEF) signed a contract to play the Super Cup in Arabia for three years for 120 million euros (136 million dollars).

At the same time, Amnesty International asked the participating teams on Monday for “a gesture in favor of women’s rights” in the Arab country.

The controversy over the rights of Saudi women (who were authorized to access the Super Cup matches in 2019) had splashed the first edition of the Super Cup in the Arab country.