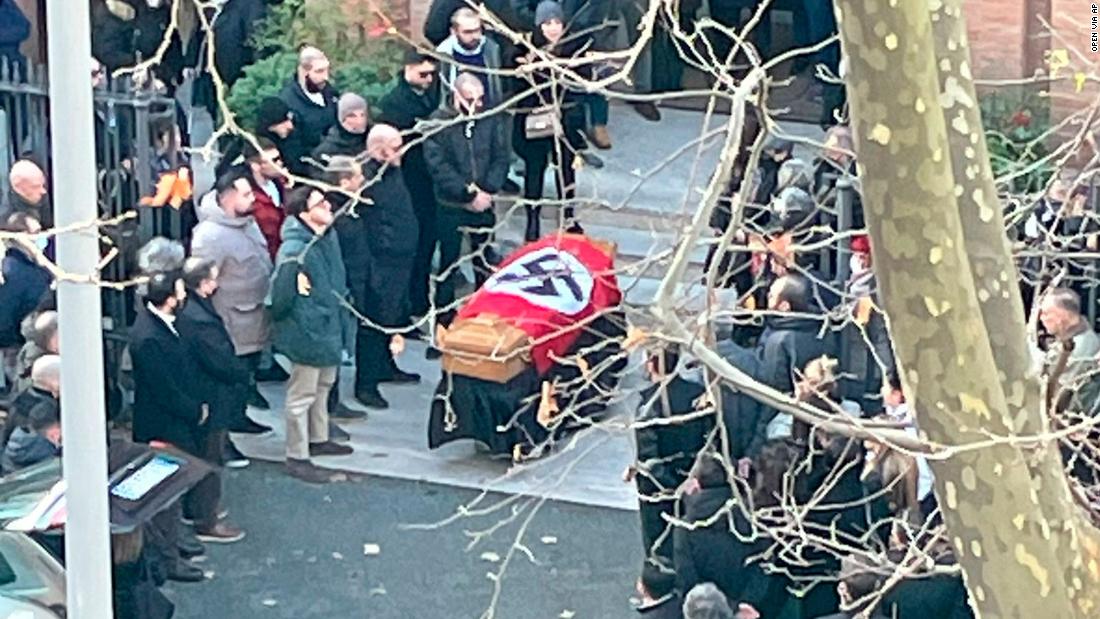 Italy’s religious leaders reject use of Nazi flag at funeral

(Reuters) – Italian Jewish and Catholic leaders described it as outrageous when far-right people placed a flag with a swastika on a coffin outside a church after a religious funeral and performed Nazi salutes.

The Roman Catholic Archdiocese said in a statement that priests at the parish of Santa Lucia, in a central Rome neighborhood, including the priest who presided over the funeral, had no idea what was going to take place outside the church on Monday.

An image provided by the Italian online news portal Open shows people gathered around a coffin covered with a swastika outside the Church of Santa Lucia in Rome, Italy, on Monday.

The images published on the internet showed the coffin with the body of Alessia Augello, a former member of the far-right group Forza Nuova, covered by the flag.

The diocese statement called the flag a “horrendous symbol that cannot be reconciled with Christianity” and said the episode was an offensive example of “ideological exploitation” of a religious service.

Police said they were investigating the incident as a possible hate crime.

The Jewish community in Rome expressed their outrage that such events could continue to occur more than seven decades after the end of World War II and the fall of the Italian fascist dictatorship.

“It is unacceptable that a flag with a swastika can continue to be displayed in public in these times, especially in a city that saw the deportation of its Jews by the Nazis and their fascist collaborators,” the statement said.

Following a raid on Rome’s Jewish quarter on October 16, 1943, more than 1,000 Jews from the capital were deported, most to the Auschwitz death camp in Nazi-occupied Poland. Only 16 returned.

The statement from the Jewish community on Tuesday said the funeral incident was “even more outrageous because it happened in front of a church.”

A similar incident occurred in front of another church in Rome in March last year.

Previous This EUPHORIA actress wanted to look like MARÍA FÉLIX at the premiere of the series; Did you make it?
Next This is what Mechazilla looks like, the launch and capture tower for the Starship