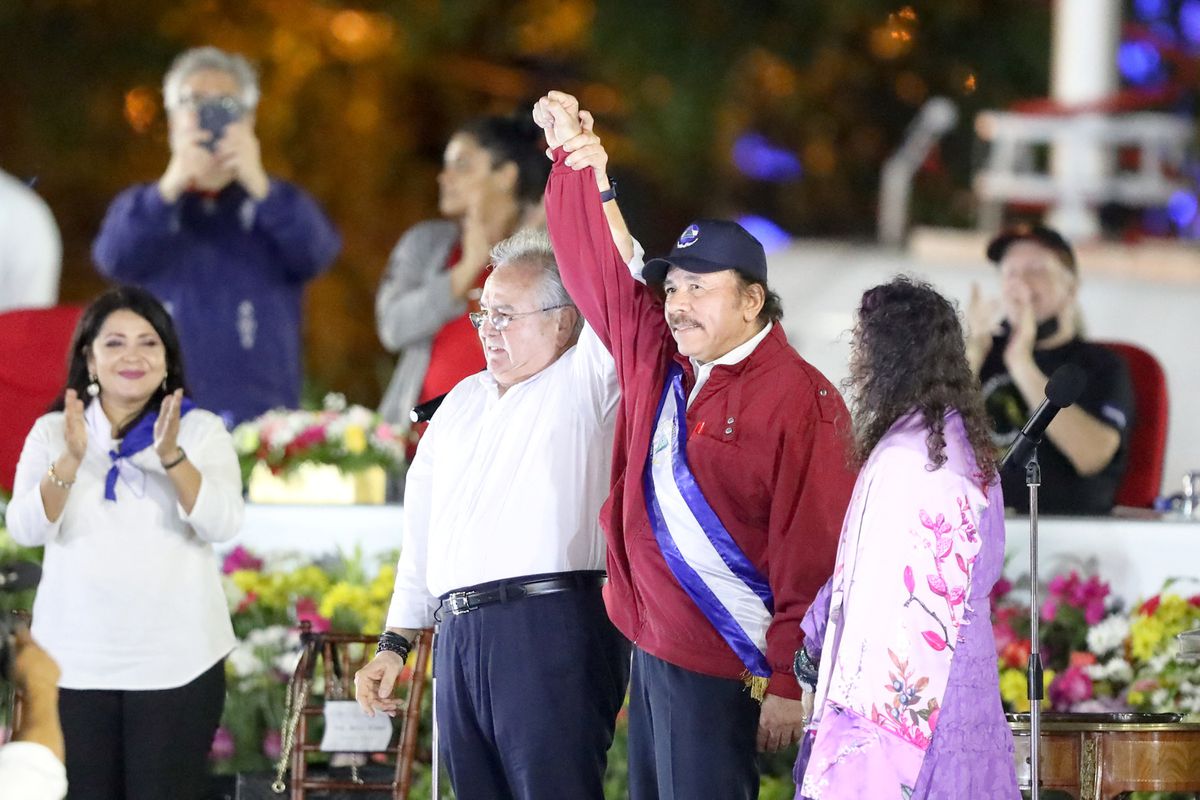 Daniel Ortega arrived earlier than planned for his inauguration ceremony, held in the old Plaza de la Revolución Sandinista, in Managua. He was accompanied by his wife, Vice President Rosario Murillo, who severely called the attention of the hostesses who showed them the way to the stage. In the concrete field, carefully arranged in chairs dressed in white with a blue ribbon, the assistants waited for the presidential couple that came to seal their perpetuation in power, after imprisoning all their opponents before last November’s elections. The capacity was filled by Sandinista sympathizers, state officials, police and military. Among the international guests, there were two former Salvadoran presidents who were fugitives from justice, Salvador Sánchez Cerén and Mauricio Funes, US activists nostalgic for the Sandinista revolution and representatives of remote nations whose names could not be pronounced by the ruling party deputy Wilfredo Navarro, in charge of giving the reception.

Ortega, more hyperactive than usual, greeted foreign delegations. He shook hands, moved from one side of the stage to the other, anxious, until he unexpectedly got off the podium to go to receive one of his special guests, the president of Cuba, Miguel Díaz-Canel, who arrived unsullied. in your starched guayabera. He was followed by Venezuelan Nicolás Maduro, the third head of state to accompany Ortega to the inauguration. The first to arrive in the plaza had been the Honduran Juan Orlando Hernández, an outgoing president appointed by drug trafficking in a New York court and who in recent months has approached his Nicaraguan counterpart.

Those were the only three heads of state who accompanied Ortega and his wife in a protest marked by unprecedented international isolation, even greater than that suffered by Nicaragua in the 1980s during the Sandinista Revolution. 39 countries, various systems such as the European Union and 25 nations of the Organization of American States (OAS) are unaware of the legitimacy of the elections last November. Thus, the presidential couple inaugurated a new period of illegitimacy and isolation. Despite the fact that the hosts tried to make it appear that the world was accompanying them in the protest, the list of international attendees remained like this: two authoritarian presidents, one with ties to drug trafficking, two fugitive former presidents and several representatives of small countries. The delegations that were listed by Congressman Navarro were not made up of senior officials, including that of Mexico, whose government stumbled in recent days over whether or not it would send someone.

Along with Díaz-Canel, Maduro and Juan Orlando Hernández was the delegation from China, a country that Ortega recognized a month ago after breaking the relationship with Taiwan. Beijing sent Cao Jianming, vice president of the Standing Committee of the Communist People’s National Assembly, as head of the delegation. Prior to the event in the Plaza de la Revolución, Ortega and the Chinese signed four agreements, among which the cooperation within the framework of the economic belt of the Silk Road and the Maritime Silk Road of the 21st century stands out. The Silk Road is conceived as a Chinese network of infrastructures spread over five continents that can cost up to a trillion dollars.

In a ceremony that reflected his international isolation, Ortega received the presidential sash from the hands of the president of the National Assembly, the very loyal deputy Gustavo Porras. Immediately, the president took the microphone and began a speech that had three defining moments. The first, when he complained about the absence of delegations from the United States and Europe. “The Yankee government and the European governments do not send delegates, but what greater pride to have here representatives of worthy men and women who fight for true independence in their countries,” he said in reference to the representatives of those countries who moved to the rhythm of propaganda songs.

Ortega then invoked the assault on the Capitol in Washington, committed by Trumpist hordes a year ago. To justify the more than 160 political prisoners that he has in Nicaragua, the newly inaugurated president said that those prosecuted for the takeover of the US Congress “are 700 political prisoners.” “What do you expect to release them? There they are hard against them … And how would the Yankees have reacted if they were given acts of terrorism like the ones we faced in 2018? violence.

At the end of the speech, Ortega said that his goal “is to give continuity to the good progress that we had until before April 2018. That, a clean slate, and we move forward,” he settled. The statement immediately began to be frowned upon, as well as interpreted as a way for Ortega to formalize impunity over the claim for justice of the 355 fatal victims of April 2018. A tombstone of oblivion.

On Monday morning, prior to the questioned inauguration of the Ortega-Murillos, the United States and the European Union jointly sanctioned officials and key regime entities in the repressive gear, such as the National Police, the Supreme Electoral Council and the Nicaraguan Institute. de Telecomunicaciones y Correos (Telcor), an entity in charge of a trolling farm to generate disinformation, as revealed by a journalistic investigation in June 2021.

The United States put the hard note by sanctioning six more people, especially three generals of the Nicaraguan Army, an institution that has always claimed that it is staying out of political repression, although many human rights organizations accuse it of complicity and inaction in the face of the disarmament of paramilitary groups that operate outside the Constitution. Subsequently, the United States also announced that it was canceling the visas of 116 people “complicit in undermining democracy in Nicaragua,” including mayors, prosecutors, university administrators, and police, penitentiary and military officials.