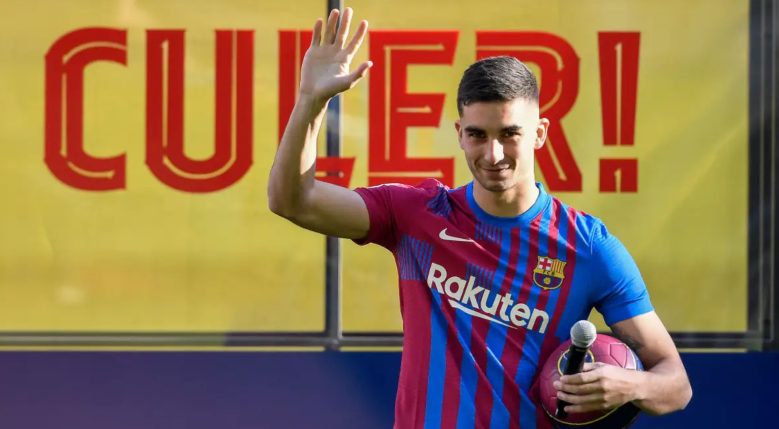 Barcelona has confirmed that the new signing Ferran Torres will wear the number 19 of the shirt at the Camp Nou after his stint at Manchester City, Premier League champions.

The 21-year-old has been officially signed by the Catalan giants, after Samuel Umtiti agreed to an extension of the contract with a reduced salary, and will take the jersey number 19 from Sergio Agüero.

Agüero confirmed in December 2021 that he was retiring from professional football due to a heart condition. The Argentine won the number 19 shirt when he arrived at the Camp Nou after deciding not to wear the famous number 10 of Lionel Messi that is now owned by Ansu Fati.

The number 19 jersey has been worn by many famous names in Barcelona, ​​including scorers such as Juan Antonio Pizzi and Patrick Kluivert. Messi also used the number briefly between 2006 and 2008 in his early years with the first team.

Will Torres be ready to make his debut in El Clásico?

Torres could now make his Barcelona debut in the Spanish Super Cup semi-final against Real Madrid in Saudi Arabia on Wednesday, January 12. The forward is available after testing negative for Covid-19 and recovering from a foot injury.

The new signing has already been making his presence known in pre-match training. Barça showed the Spanish international staring sharply in front of the goal on social media.

Xavi spoke about the possibility of Torres making his pre-match debut at the pre-match press conference. He told reporters: “We will see if Ferran, Ansu and Pedri start tomorrow. They will have minutes, and they will see how far they can go. It is important to see how they are physically. We don’t want to lose more players ”.

Busquets excited by the young culé

Captain Sergio Busquets also spoke at a news conference ahead of the Super Cup Clasico and explained how pleased he is to be playing with so many talented youngsters at Barcelona.

Torres joins an exciting crop of young people in Barcelona, ​​particularly teenagers like Ansu Fati, Gavi and Nico González who have passed through the club’s famous La Masia youth academy.

Captain Sergio Busquets also spoke at a press conference before the Super Cup Classic and explained how happy he is to play with so many young talents in Barcelona.

“I am very happy when young players emerge from the lower categories because of what it represents for the first team. Soccer has changed and everything moves very fast. That means young players are ready to go earlier, ”he said. “However, we should not put pressure on them but rather take advantage of their ambition and talent. They are players who will mark the current and future path of the club ”.

Torres is still only 21 but already has a lot of experience. The forward has won the Copa del Rey with Valencia, the Premier League with Manchester City and was also part of the City squad that reached the Champions League final last season.

The youngster is also one of many Spain internationals at Barça, including Busquets, Jordi Alba, Eric García, Sergi Roberto, Ansu Fati, Pedri and Gavi, and has already played with many of his new teammates at the national team level.

READ THE ORIGINAL NEWS ON HEAVY.COM

READ MORE: Xavi sends a very clear message to Memphis: What did he say?