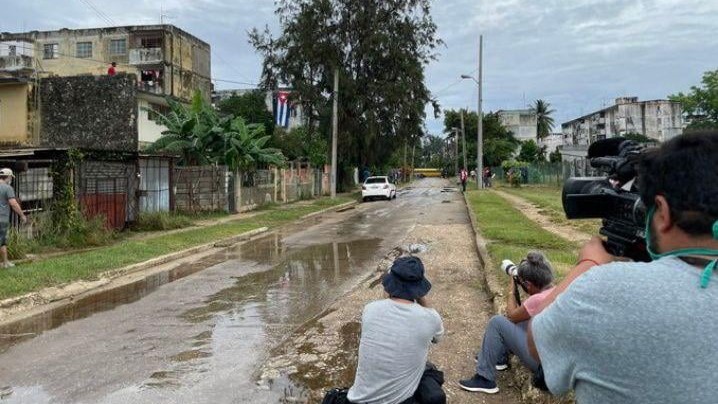 The president of the EFE Agency, Gabriela Cañas, declared that this Spanish communication service is considering its permanence in Cuba, after not having yet recovered the accreditations of its journalists to work on the Island.

“If we cannot freely exercise journalism, we cannot do more”he said, according to the Europa Press agency.

Cañas explained the situation during his participation in an informative breakfast that he starred on Wednesday, organized by the New Communication Forum, at the Madrid Casino.

The directive affirmed that “unfortunately” the problems for the agency in Havana have not been resolved.

Last summer, the Cuban authorities withdrew the accreditations of the seven EFE professionals who worked on the island, leaving them “without witnesses” and without being able to report, Cañas said.

The president reported that At this time, a journalist and a cameraman can exercise the profession in Cuba. “The agency really has no interest in leaving Cuba, but if they kick us out, we can’t do anything else. Maybe we would have to report from outside the island,” he said.

The president of EFE, Gabriela Cañas, on the situation of the agency’s delegation in Havana: “They are kicking us out of Cuba”#NEFonline # EFESiempreEstá pic.twitter.com/T0jzK8g7wu

“They are kicking us out of Cuba,” declared the president of the agency, who assured that with the human resources available to them on the island, they cannot offer their subscribers the quality standards that they have in the communication medium, which “is very painful.”

EFE has been in the regime’s sight since its coverage of the massive protests of 11J, when the reporters of that and other foreign agencies in Cuba followed and evidenced some of the repressive actions of the regime against Cubans.

On the occasion of the convocation to the Civic Day for Change in Cuba on November 15, On November 13, the Cuban authorities withdrew the press credentials of five reporters from the agency, without clarifying whether the measure was temporary or definitive.

That provision was adopted a month and a half after the accreditation of EFE’s editorial coordinator in Havana, Atahualpa Amerise, had been withdrawn.

The authorities warned the EFE team that they could not carry out their journalistic work from that moment on, and did not want to clarify the exact reasons that led them to make the decision.

Amerise, then coordinator of the EFE newsroom in Havana, wrote on Twitter that since August he had no credential. “The International Press Center (CPI) of the Ministry of Foreign Affairs told me that I no longer had authorization to carry out journalistic work in Cuba, although I could continue directing the office and editing notes from my colleagues,” he explained.

Amerise specified that “this was due to the coverage we did of the July 11 protests. The Cuban authorities argued that EFE had put its editorial line at the service of “the counterrevolution.”

In November, the Spanish Minister of Foreign Affairs, José Manuel Albares, reiterated to his Cuban counterpart Bruno Rodríguez Madrid’s request for the accreditations to be returned to the Agency’s staff.

“I have reiterated my request that all the accreditations be returned to EFE journalists, something fundamental for Spain (…) My position has been clear and we have agreed to continue talking about it,” Albares said in statements to EFE.

Although two of the permits were restored the following day and the Cuban government promised to return two more “as of November 28,” as well as to grant the press visa of the new agency delegate in the country, requested in September, EFE has been denouncing for months the difficulties it faces in operating on the island.

In this context, the official press blamed the Spanish agency and CNN en Español for “encouraging the protests” called by the Archipelago platform for the 15N.

In text published on the official site Cubadebate It was stated that both EFE and CNN “played a prominent role” in calling for protests since “they anticipated events, contributed to the creation of a certain climate, fabricated the news even before it happened.”

He also questioned that “a week before 15N, the (Spanish) agency stopped showing interest in covering other important events that occurred in Cuba, such as the progress in the vaccination process in the country; the recovery of the health situation from the health strategy implemented in Cuba, the announced opening of the country to tourism and travelers in general, as part of the return to the new normal. “

Last week, Cuban activists such as Saily González Velázquez and Salomé García Bacallao launched a campaign on social networks with the aim that the Spanish press agency EFE cover the trials to which dozens of Cubans are being subjected for participating in the protests of the July 11.

“We still have time to get the accredited foreign press in Cuba to cover the trials of political prisoners. Several family members and activists have already joined the #EFECubreLosJuicios #SOSCuba campaign. Let’s support them,” former Archipelago coordinator Saily González wrote on Twitter .