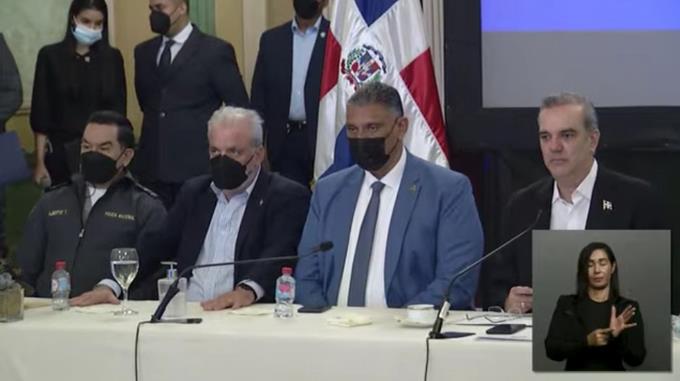 Abinader promulgates regulations of the Organic Law of the PN

The President of the Republic, Luis Abinader, announced the promulgation of the regulations of Organic Law No. 590-16 of the National Police.

The president recalled that the Law was pending the development and promulgation of the regulations, so it was only put into operation six years later.

“In order to comply with the provisions of Organic Law No. 590-16 of the National Police, since we arrived at the Government we set out to develop its Regulations, which had been pending for 6 years and whose implementation was not fulfilled by the previous administration” , he indicated.

In that sense, he said that it was necessary to create the legal framework to advance with the National Police reform project.

Regarding the general application regulations, he explained that it empowers the Superior Police Council to know and approve the other internal regulations of the Law itself, which were also drafted and reviewed by the working group and the Legal Consultancy of the Executive Branch. .

“In summary, with these actions we are marking a new milestone in this long road that represents the commitment to our country and to the Dominican people,” the president stressed.

According to his resume, Pepe Vila has more than 22 years of accumulated professional experience throughout the Latin American region and East Africa, working in the fields of organized crime, terrorism, drug trafficking, corruption, crime prevention, drugs, treatment, rehabilitation and social reintegration.

On January 7, the Executive Power issued decree 2-22, which creates said body, which has within its functions, the implementation of the design conceived by the working group for the transformation and professionalization of the National Police .

It also establishes that this commission will coordinate, with an executive character, the public instances and the administrative departments that have to intervene to execute the transformation and professionalization of the National Police.

The Executive Commission will be made up of the Head of State, who will preside over it; the Minister of the Interior and Police, Jesús Vásquez Martínez, who will serve as its vice president; the Minister of the Presidency, Lisandro Macarrulla; the executive commissioner, Pepe Vila, and two members appointed for such purposes by President Abinader.

Similarly, Abinader also ordered the appointment of Servio Tulio Castaño Guzmán as a member of the executive commission for the implementation of the strategic plans and policies for the transformation and professionalization of the National Police.