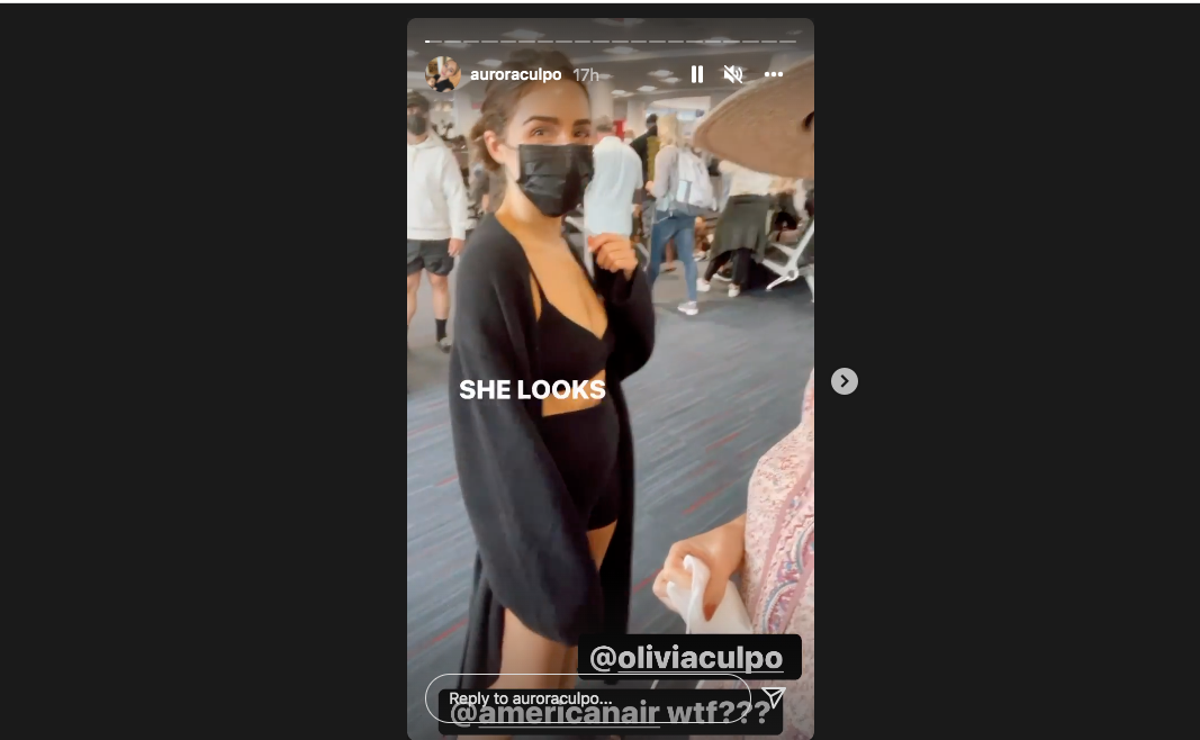 American Airlines staff allegedly told former Miss Universe Olivia Culpo to cover up or she wouldn’t be able to board her flight to Cabo San Lucas in Mexico.

The model wore a pair of skinny shorts with a cropped top, revealing her midriff, and a long black cardigan.

Olivia was traveling with her sister Aurora, who filmed her at the airport in the outfit she was wearing, calling it “cute” and “appropriate.” She explained that her sister had been called to the airline counter to “tell her that she needs to put on a blouse, otherwise she can’t get on the plane,” Aurora said. “Tell me, isn’t that pretty f***ing?”

American Airlines establishes in the conditions of transportation that passengers must: “Dress appropriately; bare feet and offensive clothing are not allowed.”

In another clip it is seen that Culpo obeyed the alleged request of American Airlines by wearing her boyfriend Christian McCaffrey’s sweatshirt and is talking to a woman who had a lot of exposed skin, but the airline did not penalize her.

The Independent contacted American Airlines for further comment on the incident and its dress code.

Aurora posted a final photo of McCaffrey with his arms tucked into his T-shirt getting cold on the flight with a humorous caption: “When you freeze because your wife dresses inappropriately. Exactly how Jack of the Titanic died.”

There have been a number of recent cases where passengers’ clothing has been deemed inappropriate for travel. In September 2021, a woman accused Alaska Airlines of harassment after she was kicked off a flight for wearing a cropped top, an outfit the flight attendant deemed “inappropriate.”

In March 2019, Emily O’Connor tweeted that she had been left “disturbed and upset” after the crew of a Thomas Cook flight from the UK to Spain threatened to remove her from the plane unless she covered her crop top ensemble. and pants at the waist.

Each airline can determine its own dress code. In June 2021, United Airlines broke the “formal dress” rule and revised its appearance standards for employees. He now allows his staff to have tattoos and piercings. Its guidelines aim to “reflect a more modern look, with inclusive standards that favor freedom of gender expression so that employees can feel their best at work.”

Previous Summary of the match Queretaro vs Pumas (1-3). GOALS
Next Puerto Rico extends current restrictions for two weeks and limits capacity to 75%