In Brazil, about 50 million people are food insecure; lack of public policies makes the country, one of the largest agricultural producers in the world, unable to provide food for the entire population

The conflict between Russia and Ukraine goes beyond the territory of Eastern Europe, but it is not initially a question of a Third World War, but the worsening of a problem that was already present in the world: food insecurity. According to the latest report by the World Network against Food Crises, from 2020 to 2021, there was a 40% increase in the number of people with acute hunger, accounting for about 200 million who do not have physical, social and economic access to resources and food. nutrients that meet dietary needs. Russia and Ukraine are two countries with a strong presence in the agricultural sector – wheat alone accounts for 30% of the world’s exports, which corresponds to 210 million tons. A greater escalation of the conflict and the lack of an end in sight has already had worldwide effects that make the price of food rise and the percentage of people who have access to it decrease. In late March, World Food Program (WFP) Executive Director David Beasley warned that “the war in Ukraine will have a terrible impact on the millions of people who are starving around the world. It will mean an explosion in the prices of food, fuel, transport, but also less food for those who are hungry, and there will be even more people going hungry.”

In Sudan, according to the director of operations of “Save the Children”, David Wright, by the end of the year, 20 million people will suffer from food insecurity, which means almost half of the population of the country of 45 million inhabitants. THE United Nations (UN) already warned that one in three Sudanese needs food aid. At the Peru, cafeterias struggle to feed some of the Andean nation’s poorest and most vulnerable residents, cutting back on protein as food prices soar. In Brazil, according to the UN, 49.6 million people are moderately food insecure and 7.5 million are in a severe situation. Food systems policy officer at the United Nations Food and Agriculture Organization (FAO) office for Latin America it’s the caribbeanJoao Intini, states that the extent of the conflict between Russia and Ukraine in the global food chains is still unclear, but he draws attention to a concern that needs to be considered: international trade and the ability to flow commercial transactions that need keep working.

“There are several stocks of basic foodstuffs such as rice, wheat and corn that are distributed in several countries and are the necessary support for the maintenance of international trade and the supply of these countries, and this has a duration, but it is uncertain because it is connected to the demands”, explains Intini. “These countries that are important in international trade, mainly in the market of wheat, corn and various oils and oils, could really impact food security in the world if the conflict hangs”, he adds. According to an FAO deputy director, nearly 25 million tonnes of grain are trapped in Ukraine and unable to leave the country due to infrastructure problems and blocked ports in the Black Sea, including Mariupol. Satellite images analyzed by the geolocation company Kayrros show that the yield of the next wheat crop in Ukraine could be 35% lower compared to 2021 due to the Russian invasion that severely affected the planting season, which is underway, and forced farmers working under bombs, struggling to find fuel. According to Kayrros, at the moment, Ukraine would have the capacity to produce 21 million tons of wheat in 2022, 12 million less than in 2021. Compared to the average of the last five years, the yield of crops would be 23% lower. ESPM’s professor of International Relations, Demetrius Cesário Pereira, complements the FAO representative’s speech by informing that as Russia and Ukraine are major agricultural producers, the effects of the war should have a global impact. “This can lead to a food shortage in the world that can affect not only food and fertilizer importers, but also other countries, because this export can be redirected and can affect the entire world”, he summarizes.

The rise in prices directly affects the reality of the poorest countries. The grain lock in Ukraine is one of the factors responsible for the rise, which reached a record level in March due to uncertainty over supplies. In April, there was a drop, but prices remain at a historically high level. Demetrius explains that the first effects will be felt in countries that make direct imports from both Russia and Ukraine, but “which in the medium and long term can affect other countries, because the war affects exports, since the products will not leave the plantations and ports will not work, causing the entire chain to be affected”, he explains. “This can have an effect not only in the closest countries but also in the whole world”, he adds. This scenario is expected to mainly affect the poorest countries, such as Afghanistan, Ethiopia, Haiti, Somalia, South Sudan, Syria and Yemen, which depend on Russian and Ukrainian cereals or fertilizers. In 2021 alone, Somalia sourced over 90% of its wheat from Russia and Ukraine. The Democratic Republic of Congo received 80% and Madagascar imported 70% of the food.

Intini says that “food insecure is related to several factors: availability of food, cost of food, people’s purchasing power and public policies that strengthen access to food”. Recently, World Bank President David Malpass expressed his concern about the possibility of a humanitarian crisis, “a collapse in international trade networks and a second collapse in agricultural crops that will take hold if sufficient fertilizers are not available to maintain the current patterns of agricultural production, or by dependence on countries that are in conflict”, as defined by the FAO official. That is why Malpass announced that he is preparing an aid package to help countries face the many ongoing crises. “In the coming weeks, I plan to discuss with our Board of Directors a new package of around $170 billion over 15 months to cover the period from April 2022 to June 2023,” he explained. He added that the aim is to “commit about $50 billion over the next three months.”

Major agricultural powers, including European Union(EU)you U.SThe Canada and the Australia, pledged on Friday, the 6th, to guarantee food security in the world, despite the disturbances caused by the Russian invasion of Ukraine. “We are committed to working together to ensure that there is enough food for everyone, including the poorest, most vulnerable and displaced people,” the 51-member World Trade Organization (WTO) wrote in a statement. set. The signatory countries – with emphasis on the absence of large producers such as Argentina and Brazil – also emphasize that the emergency measures adopted to deal with the situation must minimize the possible number of distortions and be temporary, specific and proportionate.

THE International Monetary Fund (IMF) he also expressed his concern and said he was open to emergency funding for countries facing food insecurity. However, despite providing aid, the IMF also stated that governments need to direct fiscal support to vulnerable populations hardest hit by rising energy and food prices and who are being hit by the war in Eastern Europe. Higher food and energy prices have magnified the risks of social unrest, especially in low-income countries already facing high levels of debt in the wake of the coronavirus pandemic. Covid-19 and now face higher borrowing costs amid rising interest rates, the IMF said in its latest report on global fiscal developments. IMF Director of Fiscal Affairs Vitor Gaspar says it is “an absolute imperative that public policies everywhere provide food security for all”. For João Intini, the focus should be on school meals and in social protection programs, such as cash transfers. “This contributes so that food security and the guarantee of adequate food is really the result achieved”, he says. For him, this is the biggest problem faced by Brazil.

Despite the country being a major agricultural producer and having an estimated agricultural harvest for this year estimated at more than 270 tons of grain, the country has not been able to “guarantee the food security of its own population”, says Intini. “This paradox concerns the unbalanced food system. And where is the imbalance? It is precisely in the preference for maintaining the course of food exports to the detriment of a food policy and national food security”, he adds. This has a direct impact on the cost of agricultural production. “When it rises due to the fact that fertilizer and fuel are more expensive, food arrives at supermarkets and fairs at higher prices”, explains the FAO representative. In this way, it further compresses a portion of society that is greatly affected by the economic decline since the pandemic.

In addition to thinking about public policies, the professor of International Relations, Demetrius Pereira, says that, to reduce the chances of being affected by food insecurity, countries should invest more in production. He recognizes, however, that this is a medium and long-term measure, and warns of the risk of price increases due to the law of supply and demand. “When you have more demand and less supply, prices go up. Brazil, for example, is a major agricultural producer, but until Brazilian products are able to meet demand, it is not something immediate”. When these problems are found, there is a rise in prices, food inflation and a decrease in the purchasing power of a portion of the population. “At this moment, there is no scenario that can be predicted when this high price will end, nor do we have public policies that facilitate or expand the purchasing power of the consumer”, says Intini. The lawyer specializing in logistics, maritime law and agribusiness, Larry Carvalho, makes another point: when it comes to post-war, the international community idealizes a quick solution to the conflict between Russia and Ukraine. The scenario, however, reinforces the uncertainty regarding the end of the war. “In the Crimean conflict, several sanctions were imposed and they have been in effect ever since. These are sanctions that have been hampering the market.” For him, the lesson for Brazil is: “what to do to be less dependent on imported fertilizers?” 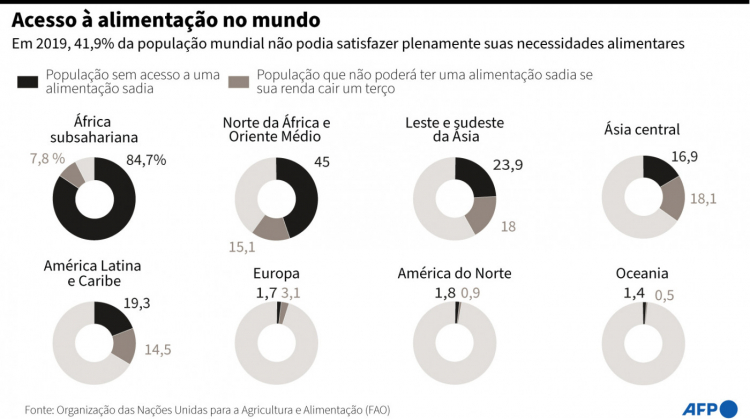 Is Ukraine facing yet another “Holodomor”?

In recent weeks, Ukraine has accused Russian troops of stealing stockpiles of grain from the country and taking it to Russia – the Kremlin, for its part, denies it. This act would increase the risk of famine and famine in an area under Russian control. These accusations started the general rumors about a possible scenario of “holodomor” – Ukrainian word that means “to starve to death”. This scenario already happened when the Soviet leader Joseph Stalin killed four million people in the country between 1931 and 1933. Demetrius Pereira says that it is difficult to idealize a scenario as being, reinforcing that there is a war of narratives that affects the perception of the community international perspective on what is actually happening in Eastern Europe. With the mismatch of information, it is not known if the stolen grain belongs to Ukrainian or Russian territories. “To accuse someone of stealing from a territory that is not theirs is complex. What happens is that they are disputed territories and there are accusations from both sides. It is necessary to check the information”, warns the teacher.

After sanctions, Russian ruble drops by a record 30% 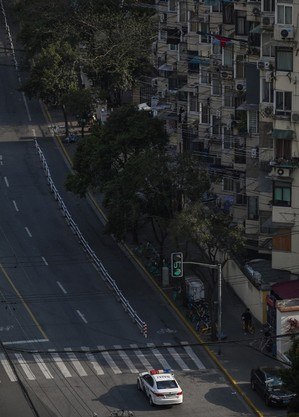 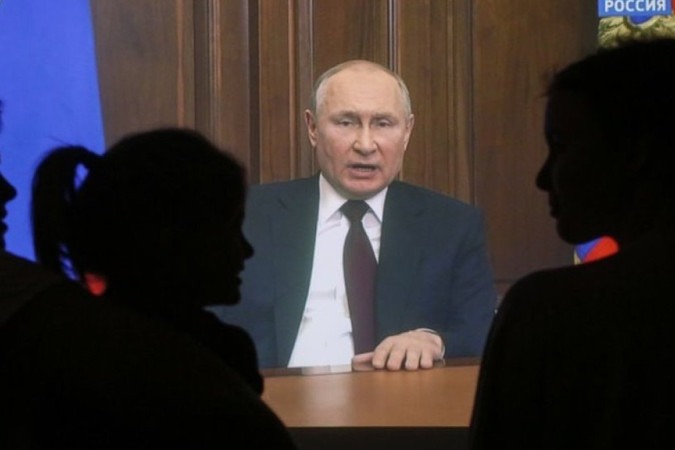 Putin will heed China’s call to negotiate a solution to the crisis, agencies say