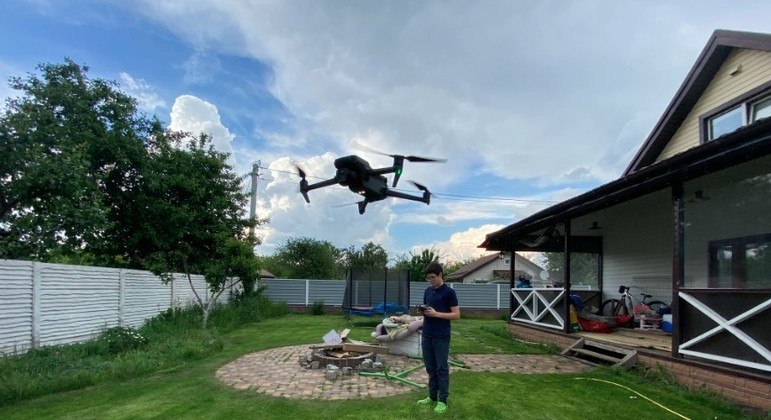 A 15-year-old teenager who used his drone to help Ukraine’s Armed Forces locate and destroy a Russian convoy early in the war was hailed Tuesday as a “true hero of Ukraine”, according to Global News. .

Andrii Pokrasa lives on the outskirts of Kiev and was approached directly by the military to help them find enemy vehicles, which were passing between the Ukrainian capital and the city of Zhytomyr.

The boy then took his drone to a nearby field and was able to photograph the convoy and even get the coordinates with the help of a GPS.

The father was responsible for forwarding the information to the Ukrainian Army through social media, according to the British tabloid Daily Mail. Minutes later, Ukrainian artillery reached the road near Berezivka and carried out the attack, about 37 kilometers from central Kiev.

The approach was so successful that the military handed the teenager the controls of a professional drone with a longer range. As a result, several units of Russian tanks and armored vehicles were destroyed.

“[Pokrasa] he was the only one who had experience with drones in that region,” said Yurii Kasjanov, commander of a territorial defense unit. “He is a true hero. A hero of Ukraine,” he added.

Pokrasa described the experience as “very, very frightening” but said he wanted to stop Russian forces from attacking his hometown.

“Our goal was to find the exact coordinates and give them to the soldiers. […] I gave them the coordinates and photos, and after that they took aim at the location,” said the teen pilot.

The use of drones in Ukraine has been important in repelling Putin’s forces around Kiev and remains a highly effective approach to combating invaders in the eastern Donbass region.

Previous Novel ‘Carinha de Anjo’: summary of the next chapters; week of June 6th to 10th, 2022
Next Older Kindles Will Lose Access to Amazon’s Ebook Store in August