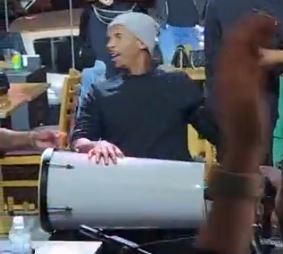 The striker Jô did not attend the training of the Corinthians on Wednesday morning, the day after the club’s defeat to Cuiabá, 1-0, at Arena Pantanal. unrelated, he was caught in a samba circle during the setback and caused mixed reactions on social media.

The information was given by UOL and confirmed by Sports Gazette. According to the report, shirt 77 did not explain his absence and the club’s attitude is to deal with the case internally until talking to the player. Only after that will there be a position on the case.

Jô was not included for the match, played at Arena Pantanal, as he is undergoing treatment for a trauma to his left leg, acquired in the 1-1 draw against Always Ready, in the last round of Libertadores groups, on May 26 .

Since then, three games have been played – draw against América-MG, victory against Atlético-GO and, finally, the defeat on Tuesday. Corinthians remains in the lead in the Brasileirão, but could lose the position depending on the results of Palmeiras and Atlético-MG, who are still playing in the round.