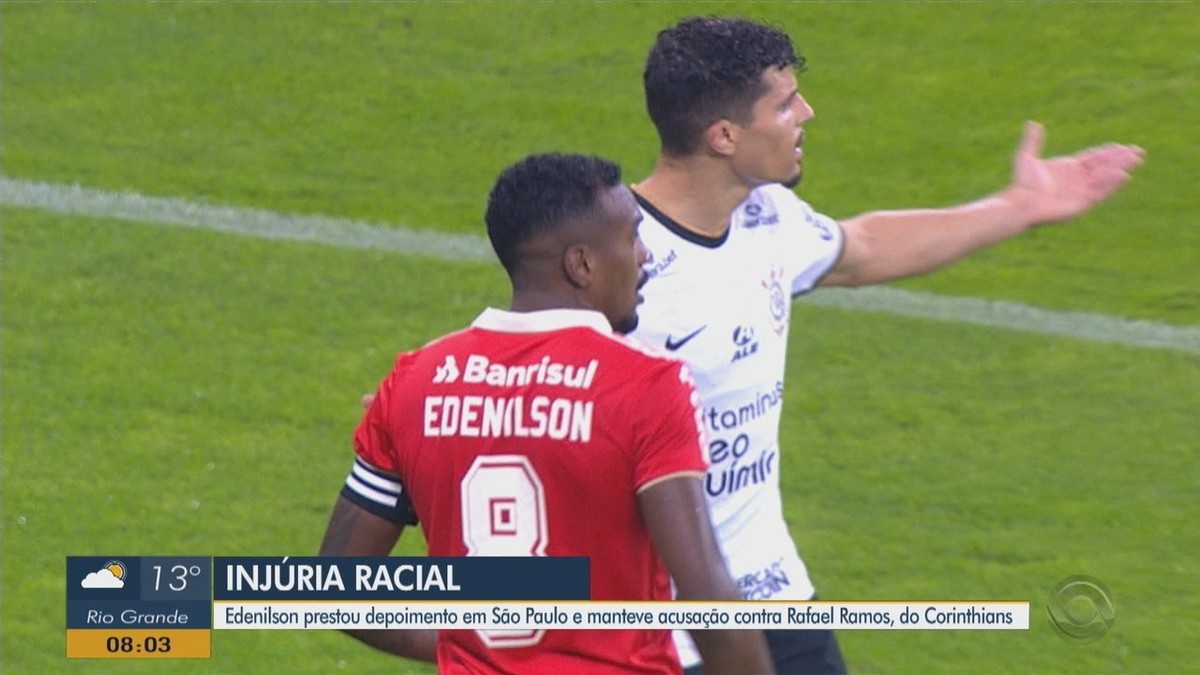 The lip reading report requested by the Civil Police of Rio Grande do Sul in the investigation that investigates the accusation of racial slur by midfielder Edenilson against side Rafael Ramos concluded that it was not possible to identify what was said by the Corinthians player.

The 40-page document was sent this Wednesday by the General Institute of Forensics (IGP) of Rio Grande do Sul to the 2nd Police Station of Porto Alegre, responsible for the case.

In the 2-2 draw between Inter and Corinthians on May 14 in Beira-Rio, the Inter midfielder accused the Corinthians defender of calling him a “monkey” during a ball dispute on the sideline. After the game, Rafael Ramos was arrested in the act by the police for racial slur and released after posting bail of 10,000.

According to a note released by the IGP, a video of the bid in question was analyzed by the experts, but it was not possible to identify what Rafael Ramos said because most of the gestures that make up his speech occur in the “inner portion of the oral cavity” .

– For these reasons, it is inappropriate for the official criminal expertise of the State to affirm, with responsibility from a procedural and scientific point of view, what was said by the player in the questioned scene – says the text.

The delegate Ana Luiza Caruso, responsible for the case, said that she has already received the document and that she will forward the investigation to the Public Ministry (MP), without any request for indictment against the Corinthians player. The MP will decide whether to proceed with the case in court or not.

– Let’s gather the expertise hired by Edenilson and Rafael Ramos, and then there’s the question of the victim’s word, to see what evidence there is, other than supposition. In principle, there will be no indictment – said the delegate to the ge.

The case is also being investigated in the sports sphere. On different dates, both Edenilson and Rafael Ramos gave statements at the Superior Court of Sports Justice (STJD) and maintained the versions presented previously.

The auditor-rapporteur of the case, Paulo Feuz, said that the investigation should be concluded in 35 days. The STJD will also request a court expertise for the production of evidence and rules out a confrontation (confrontation of versions) between the two players.

Check out the full note released by the IGP:

The General Institute of Forensics sent today to the 2nd Police Station of Porto Alegre the Expert Report on the request for a lip-reading expertise about the facts that occurred in the game at Estádio Beira Rio on May 14.

Since it is not possible to identify the movements performed in the internal portion of the oral cavity of the player in the white shirt, it is technically impossible to locate all the traces that define the sequence of consonants and vowels emitted. Most of the gestures that make up speech occur precisely in the intraoral environment or in other internal portions, such as the pharynx and larynx. Not even in videos with excellent image quality it is possible to obtain information about what is happening in the non-visible part of the vocal tract.

Regarding the request for an expert examination of lip reading, it is noteworthy that no scientific methodology was found, applied to the forensic analysis of videos, to support this type of work. There are only publications on visual speech perception and lip reading learning. In addition, the record sent does not have the sound of the speeches that were of interest to the investigation, making audio expertise impossible.

For these reasons, it is inappropriate for the State’s official criminal expertise to state, with responsibility from a procedural and scientific point of view, what was said by the player in the questioned scene. The Report states that “without the respective sound signal to carry out an adequate auditory-perceptual and acoustic analysis, it is conceptually unfeasible to define a reliable and unequivocal sound pattern given by an individual based exclusively on information relating to the component articulatory gestures. that are outwardly visible (such as lips and jaw)”. The document also states that “results from the attempt to map what would have been uttered by a questioned speaker in an image without the associated speech audio (and consequent acoustic signal) would be merely exploratory, representing much more conjectures around anatomofunctional possibilities of the than material evidence per se”.

The Expert Report has 40 pages and is signed by two criminal experts from the Audio and Images Section of the Criminalistics Department of the IGP.

Previous Accused of defaulting in MS, “Pharaó dos Bitcoins” is a candidate
Next Why Baz Luhrmann Didn’t Cast Harry Styles in Presley Biopic –