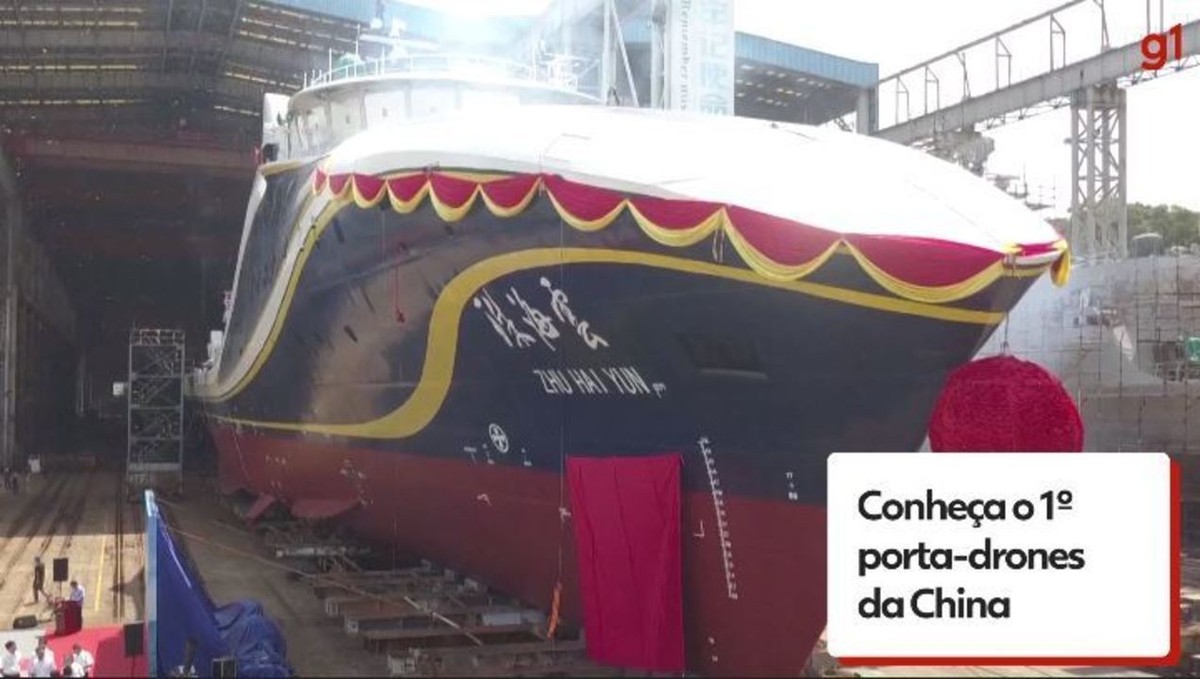 The Chinese recently launched the world’s first drone carrier. Dubbed the “Zhuhaiyun”, the vessel is intended for research purposes, but experts fear it will be used for military purposes.

Chinese state media reported in late May about the launch of the ship, billed as a flagship for maritime research, and pointed out that it will be fully operational before the end of 2022.

The vessel will carry an unspecified number of air, sea and submarine drones..

But the drone carrier represents a shift from the growing importance of pilotless aircraft in modern warfare.

The “Zhuhaiyun” is 88.5 meters long and can reach 18 knots (33 km/h). Chen Dake, a researcher at the Chinese Academy of Sciences and director of the laboratory that owns the boat, described it to the China Daily as “revolutionary”.

According to the scientist, “the boat is not only a tool of unprecedented precision in the confines of what is maritime science, but also a platform for the prevention and management of maritime disasters, for accurate mapping of the seabed (…) and rescue”.

But it seems unlikely that this ship will be exclusively for scientific use.

The drone carrier is a tool that can be used in the service of Chinese interests in the Indo-Pacific region, another step in the military use of drones, which have been deployed from Afghanistan to Libya and are currently in combat in Ukraine, where they show their importance in modern warfare.

China and the United States are at the forefront of this race, ahead of other competitors such as Israel and Turkey, which have also managed to gain space in this market. But Beijing’s presentation of Zhuhaiyun is somewhat enigmatic.

“There is a lack of empirical data to suggest that the Chinese state can actually use this ship in an integrated way” during a conflict, said Paul Lushenko, an American lieutenant colonel and a researcher at Cornell University.

The expert told AFP that “it is the first such development, but other navies in the world, including the US, are working on the possibilities of remote warfare in the maritime domain.”

Such a drone carrier, especially if it can be replicated, could allow Beijing to block access to a certain area.

China multiplies territorial disputes with its neighbors and will in the future be able to establish itself in a territory without having to deploy its troops.

One of the key elements for the drone carrier is the autonomy of movement.

“It’s a bit like the analogy with a school of fish: the shapes are created in the water, which are not an individual decision of any of the fish, but the result of their collective intelligence”, explained to AFP Jean-Marc Rickly, director of global and emerging risks from the Geneva Security Policy Center (GCPS).

“The ultimate goal is to create something that has collective intelligence capabilities,” he said.

Currently, there are devices that are semi-autonomous, that are programmable. But last month, Zhejiang University released a video showing 10 drones flying through a bamboo forest.

“They start to understand the environment they are in, to identify obstacles, to communicate to make a topography of places and overcome obstacles”, explained the researcher.

All the great armies of the world are working on projects of this type, with the aim of saturating a space – whether air, sea or submarine – with cheap and infinitely replaceable objects, as opposed to very sophisticated devices piloted by people.

In 2020, the Rand Corporation research center estimated that the computing power of a military drone was less than that of a smartphone. That organization specified that a unit of 900 soldiers could launch and retrieve 300 drones every six hours, for a total of 1,200 sorties a day, 24 hours a day, seven days a week.

“The idea is saturation, to finally exhaust the available arsenal of interceptor missiles against the enemy,” he said.

Previous Tales of the Walking Dead gets premiere date and official photos: Check it out!
Next VIDEO: Cameras capture the execution of a businessman with more than 20 shots in São Pedro, in the interior of SP | Piracicaba and Region