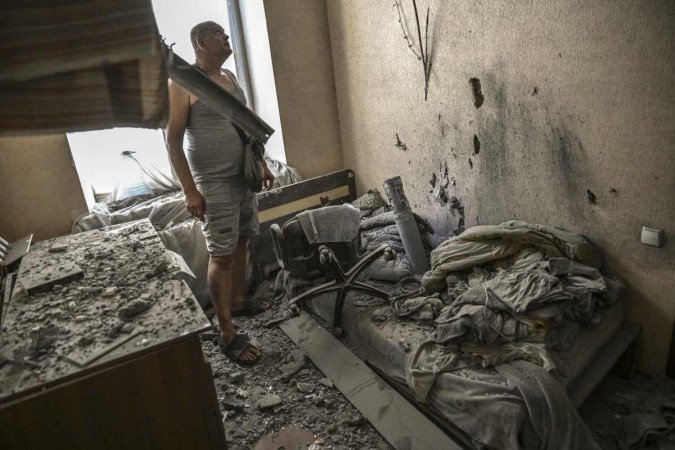 Buildings and schools in the city of Kherson, in southern Ukraine, have been turned into places of torture. Inside, at least 600 Ukrainians are being held in inhumane conditions by Russian troops and subjected to punishment with “equipment”.

“These people are being held in many places, such as in the basements of the 90 provisional detention center, the Security Service of Ukraine, the Kherson Regional State Administration building in the city of New Khakhova, and the police department in the same city. The same is true in Kalanchak and in recreational centers on the banks of the Dnipro River, where the Russian army has set up a base,” he told Mail Tamila Tasheva, Permanent Representative of Ukrainian President Volodymyr Zelensky to the Autonomous Republic of Crimea. Until February 24, the start of the Russian invasion of Ukraine, she visited Kherson at least once a month.

According to Tasheva, Russian occupation authorities converted rooms at School No. 17 — in Henichesk, 208km from Kherson — to carry out torture and to house hostages. “Some people are being forcibly transported to Crimea. We also got information that one of the Sizo blocks, the Simferopol detention center (the capital of Crimea), has been decommissioned and closed to the public. Inside, the Russians are holding civilians and prisoners of war”, he commented.

Tasheva explained that some citizens are placed at gates for up to two days for “prophylactic purposes”. “It is a period during which they receive certain information about other prisoners tortured there. This ‘controlled disclosure’ is exercised by the occupation authorities to intimidate other pro-Ukraine activists who, under detention, would immediately agree to cooperate,” Tamila added. She assured that the information is “verified”, despite the difficulty to obtain it, even by independent lawyers.

“We have received complaints about the existence of 600 people in these basements. The data were provided to us by family members or representatives of public associations, but the numbers could be much higher,” said Zelensky’s representative in Crimea.

“They are civilians and soldiers, kept under terrible conditions, in rooms not adapted for shelter. They are also subjected to frequent torture. No one is allowed to see them and they are prevented from revealing their whereabouts to family members. medical care,” he added.

Also according to Tasheva, in the territories recently occupied by Russia, the troops use the same methods used during the annexation of Crimea, but at a faster pace. “Among the 600 prisoners, there are activists who have organized or participated in demonstrations against the occupation in recent weeks, but also representatives of the Crimean Tatar people and former soldiers fighting in eastern Ukraine, local government officials and family members who have refused. to collaborate with the occupying forces”, he commented.

She cited the case of brothers Edem and Refat Asanov, kidnapped 36 days ago by soldiers in the village of Schastlyvtseve, in the Kherson region. “On May 13, also in Kherson, Iryna Gorobtsova disappeared from her home, after using social media to condemn the invasion. She was kidnapped on her birthday. Since then, the family has not had contact with Iryna. The Russian army falsely claimed that she confessed to helping the Ukrainian Armed Forces attack Russians at the Chernobayivka airfield,” Tasheva reported.

Director of the non-governmental organization Eurasia Democracy Initiative (in Kiev), Peter Zalmayev told the report that the news about torture chambers in Kherson did not surprise him. “At the beginning of the war, in 2014, when Crimea was annexed, Russia tortured citizens in my homeland of Donetsk, in the Donbass region (east). “I know several people who suffered torture, some of them are well-known artists. It was a form of punishment for creating protest art against the occupation.”

Russia has announced that it controls all residential areas of Severodonetsk, a strategic city in eastern Donbass. “The residential areas of Severodonetsk have been completely liberated,” Sergei Shoigu, Russian defense minister, said in a televised address. He explained that the troops try to control “the industrial zone and the neighboring localities”.

In turn, Zelensky admitted that Ukrainian soldiers were “outnumbered” and that the Russians were “stronger”. The president classified Severodonetsk and Lysychansk as “dead cities”, devastated by the bombings, and did not rule out the withdrawal of troops from the region.

What types of equipment associated with torture have been reported in the basements of buildings in the Kherson region?

First, the conditions of detention, in and of themselves, can be equated with torture. At the same time, the Russian Army and Moscow security forces use electric current, passed through the victims’ bodies, in order to cause them unbearable pain. They are also beaten cruelly. Plastic bags are placed over the prisoners’ heads in order to make them suffocate. This is repeated regularly. We can’t call it anything other than torture.

How do Russian soldiers prepare these “torture chambers”?

For deprivation of liberty and torture, the occupation authorities separate entire buildings and allocate teams that engage in it. All places where people are trapped are geographically distant from each other. This is so that such an attitude is not interpreted as “military excess”. It is a planned policy of the Russian Federation, which aims at the genocide of the Ukrainian people. Through torture and intimidation, they try to suppress any protests, and systematically “Russify” the local population, turning citizens into “Russians”. (RC)