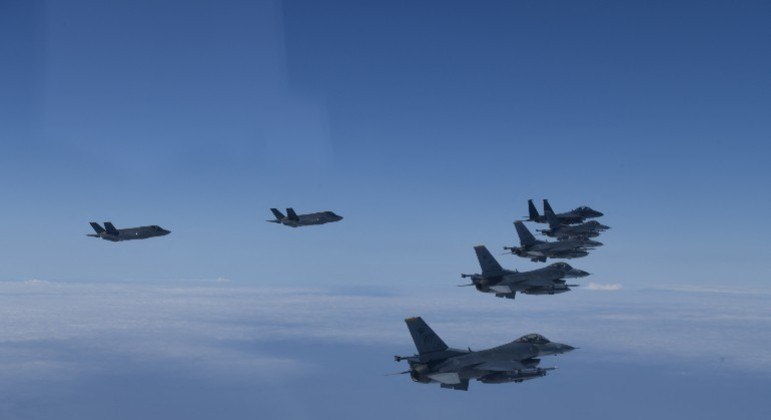 THE South Korea and the United States sent warplanes, including fighter jets, over waters off the Korean peninsula on Tuesday in a new show of force in response to the North’s recent missile tests, Seoul said.

The allies “have demonstrated their strong ability and willingness to strike quickly and accurately at any provocation by North Korea,” he added.

The air maneuvers came a day after the Allies fired eight ballistic missiles into the Sea of ​​Japan, following tests of similar weapons by Pyongyang.

On Sunday, North Korea fired eight short-range ballistic missiles from four points within 30 minutes, in one of its biggest tests to date, according to analysts.

US and South Korean officials have warned for weeks that Kim Jong-un’s regime is preparing to carry out a new nuclear test.

US Under Secretary of State Wendy Sherman said during a three-day visit to Seoul that a “rapid and forceful” response would be presented if Pyongyang decides to go ahead with what would be the communist regime’s seventh test of its kind.

Sherman said the US government was still willing to engage in dialogue with North Korea because it “has no hostile intent toward Pyongyang.”

Tuesday’s air drills were the third show of force by the Allies since the inauguration of new South Korean President Yoon Suk-yeol, who has promised a tougher stance on Pyongyang.

Previous How are the kids in the movie these days?
Next LG OLED: new update for C1 and G1 TVs arrives with Game Optimizer change