Palmeiras’ 4-0 left a mark not only on Botafogo’s fans, but also on the squad. In an interview after the game, defender Daniel Borges – who played improvised on the left side, with Saravia on the right and Hugo on the winger – commented on what the players were feeling even when asked what he would have to say to the fans.

– The fans will be sad, angry, I don’t know what feeling they will have. The feeling I have is anger, sadness at the defeat as it was. But we have to keep a cool head, focus on what we’ve been doing on a daily basis. Especially because if we let the outsider enter the group, it will make it very difficult in the sequence of the competition.

+ Analysis: defeat to Palmeiras needs to serve as a turning point for Botafogo

Daniel Borges acknowledged that the team had a very poor first half against Palmeiras — Photo: Vitor Silva/Botafogo

+ Luís Castro, on the risk of dismissal: “If the results don’t happen, that’s what awaits me”

Aware of the difficulties that Botafogo faced last Thursday night, Daniel says he knows that the team cannot let the same thing happen at Allianz Parque. The solution, according to him, is to work harder, find errors and correct them as soon as possible.

– We cannot repeat the start of the game that we had. With 18 minutes, it was 2-0. We knew it would be a difficult game and that Palmeiras put a lot of pressure at the beginning of the match, but we didn’t occupy the spaces that we should. We also ended up taking the goal from a set piece, which made it difficult for the rest of the match. But we cannot surrender. We have to keep our heads up. It’s not because we lost the game that the championship is over, no, there are still many rounds to go. It’s about putting your head in place, concentrating, because the next round is here and we need to score at home.

Based on the score and performance, the side assesses that this was the worst game of the team since the arrival of Luís Castro. However, now it’s time to cool down, put things in place and understand yourself on the field. 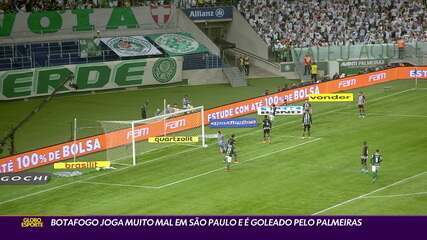 Originally a right-back, Daniel started the match against Palmeiras improvised on the left. Castro’s idea of ​​holding Palmeiras on the right side of attack did not work out and the team suffered there. But this was not the first time that Daniel has played there, as he has often acted like this with the Portuguese coach. Asked what he thinks about playing in that part of the field, he made a point of emphasizing that this is coached by Luís Castro and that the team knows what should be done on the field.

– I’m training on a daily basis. I know what the teacher asks us to do on the side. I’m a right-back by birth, but I like being on the field, I like helping Botafogo and my teammates. And if the way I can help Botafogo at this moment is on the left side, I’ll keep doing my best, my maximum. It’s not something he (Castro) does by chance (put Daniel on the left), no. We train and know what to do on the field.

Botafogo returns to the field next Monday, when they face Avaí, for the 11th round of the Brazilian Championship, at 19:00 (Brasília time), at Nilton Santos. Tickets are on sale. One point away from the relegation zone, Bota is in 15th place, with 12 points. Avaí is 16th, with 11.

Previous Check out the TV Globo movie schedule between June 4th and 10th, 2022
Next Company creates Bitcoin note, see how it works