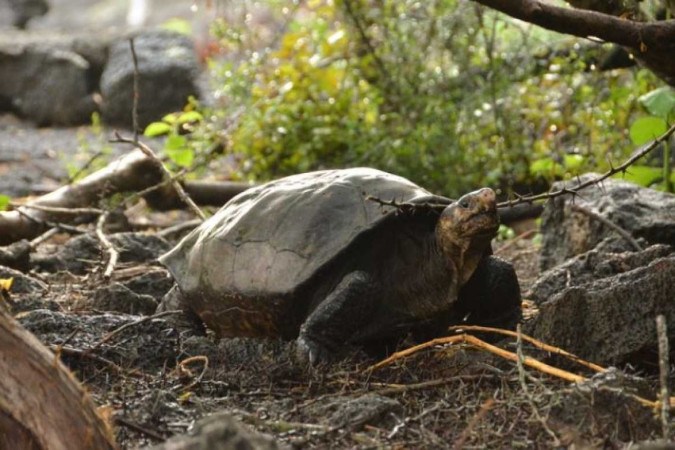 Meet Fernanda, the giant tortoise of a species considered extinct


(credit: Courtesy of the Galapagos Conservancy)

A tortoise of a species thought to be extinct 100 years ago has been found alive on the Galapagos Islands in Ecuador. The turtle had been spotted in 2019, but only now has a study published in Communications Biology, this Thursday (9/6), confirmed her species. The giant tortoise was named Fernanda in honor of Fernandina Island, Ecuador, where she lives.

Before that, the only record of the species Chelonoidis phantasticus, or “giant fantastic tortoise”, had been collected in 1906. To confirm that the two are the same species, the scientists compared their genomes as well as those of 13 other species of Galapagos tortoises. The result showed that Fernanda was very similar to the one they found on the island over 100 years ago, and both were very different from all the turtles on the other islands.

According to the researchers, for a long time they believed that the species was not native to the island, as they had never found any records of it there. Now, researchers say there may be other specimens on the island, as feces of at least two or three turtles were found. Fernanda is over 50 years old, but she is small. According to them, this may have been due to the limited vegetation that may have hindered its growth.

According to the researchers, there are now 14 different species of giant Galapagos tortoises, all descended from a single ancestor. All of them are on the International Union for Conservation of Nature (IUCN) Red List as vulnerable, endangered, critically endangered or extinct.

According to scientists, turtle populations in the region were decimated by European sailors who hunted them for food. Also, as they have a generation time, populations have a hard time recovering quickly.

The island where Fernanda lives has hardly been explored because many accesses to the interior are blocked by extensive lava fields. The Galapagos archipelago has volcanic origins and is known for the great biodiversity of the place. The group of islands was visited by Charles Darwin in 1835. The observation of species inspired his theory of evolution.

Fernanda is kept at the Turtle Center of the Galapagos National Park. There, researchers have been trying to figure out how to keep her species alive.