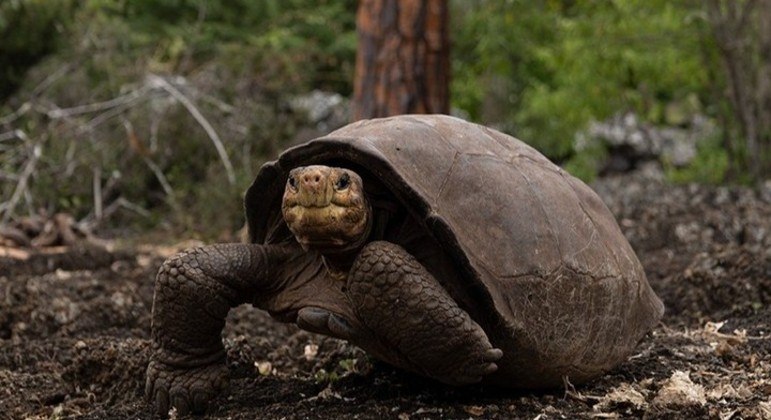 Scientists have confirmed that a species of tortoise believed to have been extinct over a century ago in the Galapagos Islands still has a living female. The animal was named Fernanda, in honor of Fernandina Island, where it was found and also the place where a specimen of the species was last seen in 1906.

The tortoise was located in 2019, but only now have scientists been able to prove that it was a giant tortoise from Fernandina Galapagos Island (Chelonoidis phantasticus) or giant giant tortoise.

By sequencing Fernanda’s DNA and that of a tortoise that was in a museum, it was possible to make a comparison with 13 other giant tortoises. In this way, the scientists discovered that the two known turtles are the same species and genetically distinct from all the others. The research results were published in the scientific journal Communications Biology on Thursday (9).

“For many years it was thought that the original specimen collected in 1906 had been transplanted to the island as it was the only one of its kind. It now appears to be one of the few that had been alive for a century,” says the Princeton University professor. Peter Grant to the British newspaper The Mirror. He has studied the evolution of species on the Galapagos Islands for over 40 years.

Peter explains that when Fernanda was discovered, many ecologists doubted she was actually the island’s native species of tortoise, as she doesn’t have a saddle-shaped shell.

Turtles cannot swim from one island to another, but they float and can be transported from one Galapagos island to another during hurricanes or other major storms. There are also historical records of sailors taking turtles between islands.

“The discovery of a live specimen gives hope and also opens up new questions, as many mysteries still remain”, says Professor Adalgisa Caccone, from Yale University, USA, senior author of the study.

Scientists estimate that Fernanda is well over 50 years old, but she is small, possibly because limited vegetation has stunted her growth.