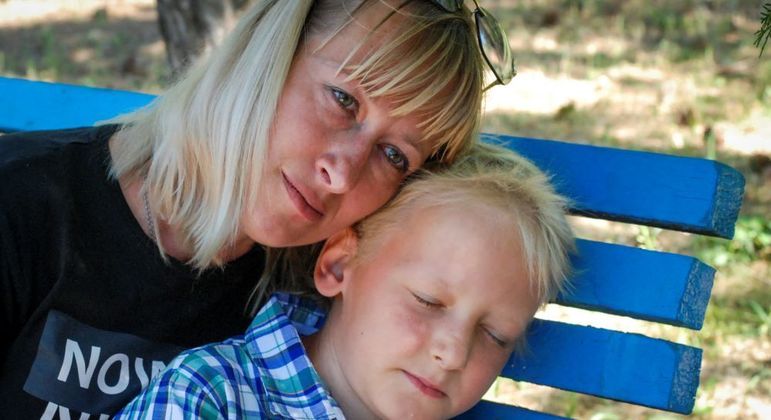 Ukraine’s war seen by a boy: ‘I have a wound on my back, the skin is peeled off’ – News

The horrors of the most violent chapter to date war in ukraine were etched in the words and drawings of an eight-year-old boy, Yegor Kravtsov, who kept a secret diary during the siege of Mariupol.

As Ukrainian troops fought an increasingly desperate defense against Russian forces in the city, Yegor spent several weeks in a basement with his family and filled the pages of a small blue diary, with a beautiful image of Greece on the cover.

“I slept well, then woke up, smiled and read 25 pages. My grandfather died on April 26”, says Yegor, reading, alongside his mother and sister, what he wrote in his diary.

The family managed to flee the city, currently under Russian control, and reach Zaporizhzhia, 100 kilometers away from their destroyed home.

A missile attack toppled the roof of the residence and the three were injured.

“I have a wound on my back, the skin is torn off. My sister’s head is broken, my mother has torn the muscles in her hand and has a hole in her leg”, reads Yegor in an excerpt from the diary.


“EVERYBODY CRYED”
On a sunny day in Zaporizhzhia, Yegor plays badminton and rides a scooter, a world very different from the images of destruction he recorded in his journal.

The drawings show armed men, tanks, a helicopter and buildings targeted by explosion. In one, the roof of his house collapses after the missile strike.

“The noise scared me,” he wrote in his diary. In another passage, he describes how family members went out to look for water.

“I want to leave so badly,” he wrote.

Her mother, Olena Kravtsova, says she cried when she first found the diary.

“I took it to my family to show. Everyone cried,” he told AFP.

“Maybe he just needed to express himself so he wouldn’t keep all his emotions inside him.”

Yegor’s sister, 15-year-old Veronika, who has a deep scar on her head, hopes the diary “will be useful to someone in the future”.

The diary images were first posted online by Yegor’s great-uncle Yevgeniy Sosnovsky, a photographer who documented the battle of Mariupol before he left the city last month.

The family lived near the Azovstal steelworks, the last stronghold of Ukrainian soldiers, who surrendered in late May after three months of fighting.

Now they are being housed in a shelter for the displaced in Zaporizhzhia and intend to travel to the capital Kiev.

Yegor’s mother claims that her son is still in shock and is reluctant to talk about his experiences. When asked if he wants to continue writing in the future, he replies, “Probably.”