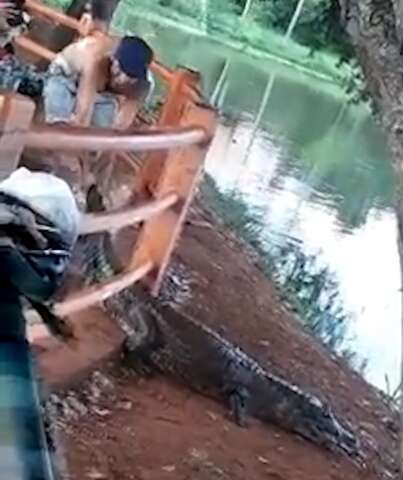 The case took place in Lago do Amor, located at the back of the UFMS (Federal University of Mato Grosso do Sul)

Video made by cell phone camera in Lago do Amor, located at the back of UFMS (Federal University of Mato Grosso do Sul), on Avenida Sen. Filinto Muller, in Bairro Ipiranga, in Campo Grande, shows a man pulling the tail of an alligator.

The image caught the boy, who was not identified, pulling the animal by the tail to the shores of the lake. Amused by the situation, he still says: “Give me my fish”. The alligator has the fish in its mouth.

The video does not show, but everything indicates that the man used the fish to attract the animal to where a group of people was. “It left with the fish”, says a child, referring to the alligator, which manages to escape and return to the water. There is no information about the day the image was taken.

According to Lieutenant Colonel Ednilson Queiroz, responsible for communication with the PMA (Environmental Military Police), the fact is part of an environmental crime. “And administrative infraction with a fine of R$ 5 thousand”, he said. According to article 29 of the Environmental Crimes Law, it is prohibited to kill, chase, hunt and catch wild animals.

In October last year, a man was left with his right arm, at shoulder height, injured after being attacked by an alligator while swimming in the lake.

straight from the streets – The video arrived through the channel Direto das Ruas, the channel for readers to interact with the Campo Grande News. Anyone who has flagrant, suggestions, news, audio, photos and videos can collaborate on WhatsApp at the number (67) 99669-9563.

Previous Serie B: victory over Vasco gives Cruzeiro an advantage of at least 13 points over the 5th place; see scenarios | cruise
Next After 30 years, Brusquense reunites with sisters who were separated after adoption