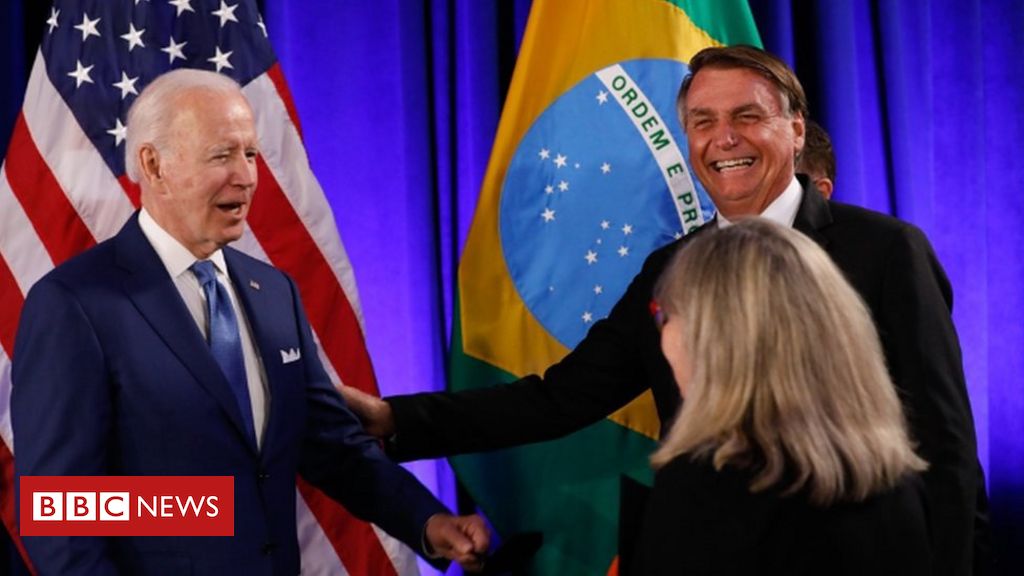 US State Department spokeswoman Kristina Rolases said this Friday (6/10) that US President Joe Biden told Brazilian Jair Bolsonaro in a bilateral conversation in Los Angeles that “the United States does not tolerate, do not accept intervention in the electoral system anywhere” and that the US government trusts Brazilian electoral institutions and expects that the electoral result obtained with this system will be respected.

“We understand very well that there are elections in Brazil in October, in the coming months. We understand very much the concern of the Brazilian people with this issue. So much so that at the meeting, President Bolsonaro himself said that he respects democracy, that he will respect the result. . We will take seriously this statement that was made by President Bolsonaro yesterday,” said Rosales.

Bolsonaro has repeated that electronic voting machines are not auditable and has already suggested that he may not accept the result of the election in October.

In the initial statement he made to Biden yesterday, at the opening of the bilateral, Bolsonaro again said that “we have elections in Brazil, and we want clean, reliable and auditable elections, so that there is no doubt after the election”.

The Superior Electoral Court (TSE) denies Bolsonaro’s statements of electoral discredit and says the system is verifiable and secure, and that there has never been evidence of significant fraud. Bolsonaro also said that “I am sure that (the elections) will be held in this democratic style. I arrived for democracy and I am sure that when I leave the government, it will also be in a democratic way.” According to Rosales, the Americans took this last statement as a commitment to Bolsonaro. “People obviously take the words that come out of the president’s mouth seriously,” Rosales said.

She also said that upon hearing Biden’s statements about the electoral system, Bolsonaro “listened and respected”. “There’s nothing being said behind (Bolsonaro’s) back,” Rosales said. Bolsonaro said he was “amazed” after the bilateral conversation with Biden. Asked how the American president felt after the meeting, Rosales avoided using the same term. “I would say that President Biden was very pleased with the conversation,” Rosales said. According to her, the dialogue opens a new phase in US-Brazil relations, but there is still no prediction of what the next steps will be.

After the spokesperson’s statements, however, the president again said that the TSE needs to evaluate the suggestions of the Armed Forces on the electoral process. This Friday, the Ministry of Defense sent a letter to the TSE in which it asks the court to facilitate the auditing of ballot boxes by political parties, as Bolsonaro wants.

“We cannot have elections under the cloak of distrust. And there is time. There is no talk about the official letter in printed votes, only technical issues, a very important one, which was the suggestion of a simultaneous count. I don’t know why they don’t accept that. I am the president of the TSE, I accept all suggestions, we will discuss and we have reached a common denominator”, said the president, just before departing from Los Angeles to Florida, where he meets with supporters this Saturday. from the State Department, which claimed the two presidents had talked about the electoral system and that Bolsonaro had committed to accepting the election results, he said he “talked loosely” with Biden about it. “I’m not here bringing problems from Brazil here. I’m not going to get into this discussion,” he said. “We all want, as most of the TSE wants, clean, transparent and auditable elections,” he added. Bolsonaro also criticized the president of the TSE, Minister Edson Fachin, who had said that the elections were not a matter for the Armed Forces.

“We were invited, I am the head of the Armed Forces, we made available to the electoral justice the best they had in the cyber defense command, we identified hundreds of vulnerabilities, we presented new suggestions, and after that the TSE always refused to discuss the His technical team with ours”, said Bolsonaro, who added. “It may even be that the TSE is right, but then Fachin declared that elections are about unarmed forces, not armed forces. So why invited us?”