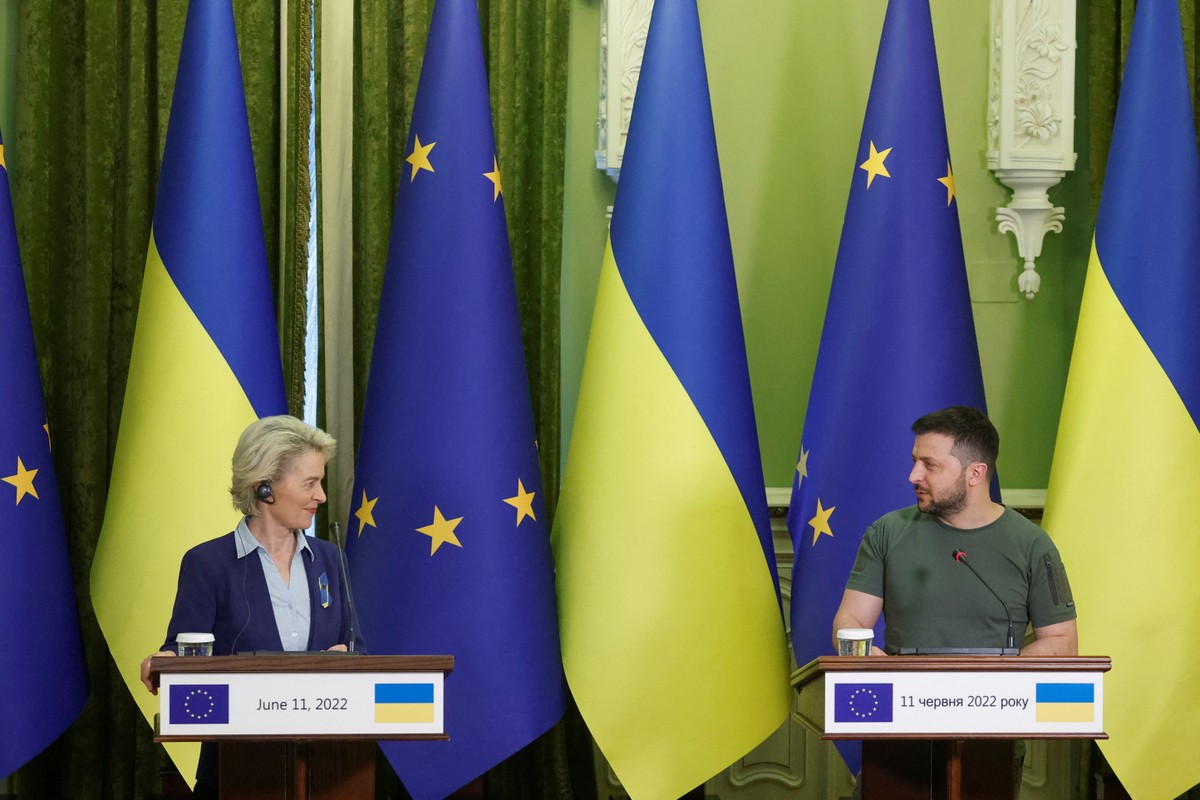 The President of the European Commission, Ursula von der Leyen, arrived in Kiev on Saturday (11) for a visit dedicated to Ukraine’s application for entry into the European Union (EU). She meets with Ukrainian President Volodymyr Zelensky and Prime Minister Denys Chmygal.

“We will discuss the common work needed for reconstruction and Ukraine’s progress towards Europe,” von der Leyen told reporters in Kiev. The President of the European Commission had already traveled to Kiev on April 8.

Ukraine is asking for a concrete “legal engagement” by the end of June from the Europeans to formalize its candidacy to the EU, on which there is no consensus among the 27 member countries. Leaders of the bloc are expected to comment on the issue next week, before a summit on June 23 and 24 that is expected to address the issue.

Intense fighting in the east

Von der Leyen arrives in Ukraine at a time of intensifying fighting in the east. On Saturday morning, Zelensky’s office announced that bombings had been carried out overnight by “occupiers” in several Donbass cities, mainly around Kharkiv, Lugansk and Donetsk.

“Russia wants to devastate every city in the Donbass, every one of them, without exaggeration,” the Ukrainian president said late on Friday. “The Ukrainian military is doing everything to put an end to the attacks by the occupiers, with all the heavy weapons and modern artillery that Ukraine has,” he reiterated, reinforcing the appeal for military material to Western countries.

In Severodonetsk, Russia’s main target in the east, fighting continues. Russian troops control most of this city considered strategic for Moscow.

“The enemy continues to attack Severodonetsk,” the Ukrainian army said in a statement this morning. According to the note, Russian troops managed to stop 14 attacks in the Donetsk and Lugansk regions in the last 24 hours, but the Russians are advancing on the outskirts of the municipality of Orikhovo.

Kiev also appealed to the international community for humanitarian aid, in the face of the spread of diseases such as cholera and dysentery in Mariupol, in the south-east of the country. In this city that was reduced to ruins by the Russian army, the sanitary structures were completely destroyed and corpses have been lying in the streets for weeks.

“The war that took 20,000 inhabitants, unfortunately with these infections will cost the lives of thousands of residents more,” said the mayor of Mariupol, Vadym Boïtchenko. He also called on the UN and the International Committee of the Red Cross to organize a humanitarian corridor to allow the evacuation of people who have not been able to leave the site so far.

In cities that could be retaken by Ukrainian troops, independent organizations carry out investigations into possible war crimes. The NGO Human Rights Watch published a report on Friday about the work it carried out in Chernihiv, 120 kilometers north of Kiev, which was surrounded by Russian troops in March.

According to the NGO, Russia violated the conventions currently in force, indiscriminately murdering Ukrainian citizens. One of the investigators, Belkis Willé, worked at the site and spoke with RFI.

“Many of the attacks we have documented clearly violate the laws of war. For example, one such attack claimed the lives of 47 Ukrainian civilians in an area where there was no military target,” he says.

To reach this conclusion, the group spent a week at the site gathering information and evidence, such as satellite images, photos and videos, in addition to recording testimonies from residents. “I hope that authorities – whether from the International Criminal Court, Ukraine or other European countries – will continue these investigations to seek explanations from the Russian commanders who ordered and allowed these attacks to take place,” he said.