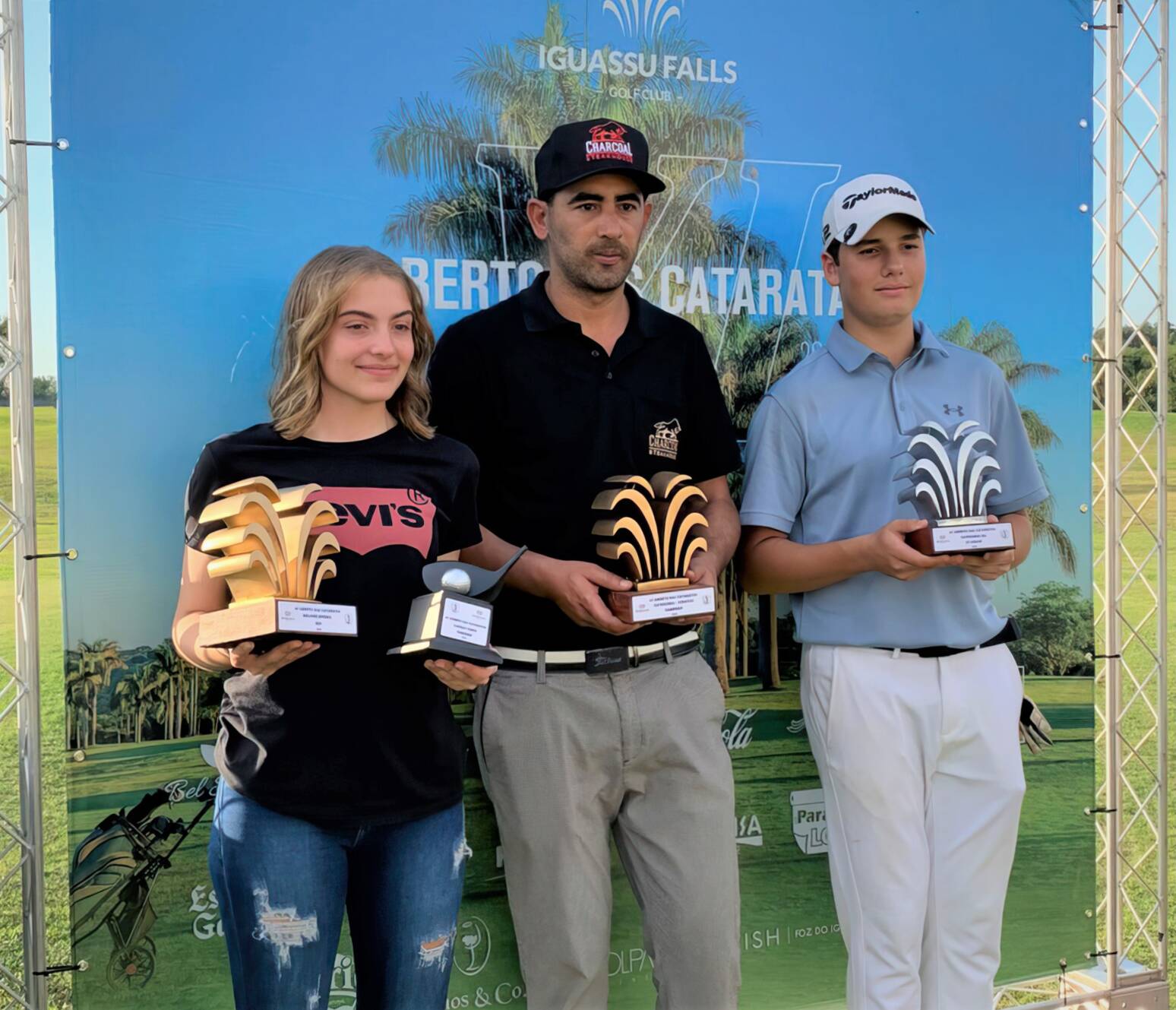 Londrina Golf Club obtained an expressive result at the 6th Open of the Cataratas, in Foz do Iguaçu, last weekend. In the men’s, LGC golfer Ricardo Corrêa was the great champion of the tournament. Ricardo Queirolo, 12 years old, was runner-up in the M4 and Luiz Fernando Cunha, 82 years old, took third place in the same category. In the female category, Ana Helena Cunha, Luiz Fernando’s granddaughter, was the best juvenile and also won the longest drive trophy. The young golfer with her grandfather Luiz Fernando Cunha, during the tournament.

The Londrina Country Club promotes its long-awaited and traditional Festa Julina on July 9th, starting at 4 pm. The party will shake the club and promises to exceed expectations. The party has been held for over 10 years by the club’s board of directors, with the support of all employees and volunteer members. There will be artistic and cultural performances, square dancing, bonfire, entertainment and lots of games. The party will be animated by singer Jorginho Brito. One of the highlights will be the typical cuisine of the stalls with a diversity of typical flavors that cannot be missed. Admission will be free for members and for guests of members, the value will be R$ 30. Guests aged up to 11 and over 70 do not pay. “Schedule and join friends and family in an afternoon full of surprises”, invite the organizers.

CONTEST FOR THE MUNICIPAL GUARD: MORE COMPETITIVE THAN IN MEDICINE

As FOLHA published in its Friday edition, in a report by Pedro Marconi, in the Cidades section, registration for the Londrina Municipal Guard contest was opened. A record number of registrations is expected, reaching 14 thousand. If this is confirmed, it will be a more difficult dispute than for the Vestibular of the Medicine course at UEL. There will be 400 candidates for one of the 35 vacancies! Of them, 3 vacancies for Afro-Brazilians and 2 vacancies for indigenous people. The minimum age required is 18 and it appears that there is no maximum age set. This will certainly depend on the physical conditions of the candidates for the vacancies. It also appears that there are no reservations for male and female competitors. The vacancy must go to whoever is approved among the first 35 places.

THE MAN WHO DIDN’T CORRUPT

Relaxing moment at the launch of the book “José Hosken de Novaes, the man who didn’t corrupt himself”, written by journalist José Antônio Pedriali. During the event at the Londrina Historical Museum, singer Osvaldo Rene and lawyer Elizandro Pellin performed a highly praised duet. “Cantando en la estacion with my friend Elizandro Pellin,” adds Rene. The Argentine singer with a London heart “I have the exact gesture, I know how to walk; I learned in the movies to one day use, a certain cruel air of who knows what he wants; but I still find the formula for love…” Part of the lyrics of Léo Jayme’s musical success, looking for his soul mate forever. We lose, we find it again, but sometimes there are stones in our way, as the poet Drumond has already said, he is far away. For Léo Jayme and his admirers: not even alchemy itself has yet managed to overcome obstacles and find the definitive formula for love!

A new C&A store opened last Thursday (9) at Boulevard Shopping. The chain’s 328th store follows the brand’s traditional molds, offering a wide variety of products. With the opening of the new unit, C&A now has 15 stores in Paraná. The company’s forecast is that another 17 units will be opened throughout the country this year. “We are expanding our mix and offering consumers an innovative shopping experience, in a wide space that will provide interactivity”, highlighted Tania Hara, Superintendent of the Mall.

Expo Japan with the Mayor

This week, representatives of Expo Japan, one of the biggest events of the Japanese community, delivered the invitation to Mayor Marcelo Belinati. The event will be held from June 15th to 19th, with an intense program that brings together art, culture, gastronomy, sports, product exhibition, lecture, workshops, and other attractions. In the photo by Emerson Dias, the acting chief of staff Moacir Sgarioni, the councilor Eduardo Tominaga, the president of Acel, Luzia Yamashita Deliberador, the mayor Marcelo Belinati and the coordinator of Expo Japan, Luciano Matsumoto. SUNDAY, roast tasting day at the Milton Furuta Meat House, at the Shangri-lá Municipal Market. Where, from the roasts for lunch, the pot of cracklings and cracklings are also a great success among the locals.

I talk on the phone with my friend Zelly Tereza Lóss, a native of Espírito Santo who, with her husband Carlos Eduardo Capela, are very popular in Londrina. He has been participating in Coamo’s “field journey”, as he is an agronomist in high demand. Zelly says that among her clients, who have become her friends, are Patrícia Balarotti, a renowned dental surgeon, Thalita Tuma, who is a competent social security lawyer, and Denise Morishita, another outstanding dentist. They are always prominent presences at Via Bosque Café, at São Paulo Tower.

She would have turned 93 this Sunday (12), if she hadn’t been killed at age 15, a victim of the Holocaust. Anne Frank, the German teenager of Jewish origin, died in the concentration camp and had her diary released to the whole world. His trajectory is the subject of the Reading Project of the Colégio Estadual do Instituto Londrinense de Educação de Surdos (Iles), which organized an exhibition that will open on Monday (the 13th), with objects and pieces created by students and teachers retracing the days lived by her in her gray hiding place in the Second World War. The exhibition is open to the public until July 6, Monday to Friday, from 8 am to 6 pm, at Iles, Rua Madre Tonina Ugolini, 39. Schedule your visit by phone (43) 3339-2272.

Practices in laboratories, internships in diagnostic centers and hospitals, research fields and a lot of learning in clinical analysis. These are motivations for the 2nd year Biomedicine students at UniFil, Lívia Leonardi and Laura Carvalho, who are satisfied with their college and full of prospects for their professional future. The regional council of the category points out at least 30 areas of action for the biomedical. “The course has great teachers and structure, it’s worth it”, the students comment. The graduation in Biomedicine is one of those offered in the institution’s July entrance exam. More information www.unifil.br NEW survey reveals that there are 180,000 homeless people in Brazil. And that in São Paulo rose from 33 to 42 thousand people in this terrible situation. How many in London? Where did they come from? What do you want in this life? Here’s a job for Sociology courses to do.

At the Summit of the Americas meeting in Los Angeles, the concern of the United States, it became clear, is with the Mexicans, who are increasingly trying to immigrate to the neighboring country. In Southern California 70 percent of domestic workers are Aztecs. In Texas, 30 to 40 percent. The president of Mexico, Señor Obrador, did not attend… so he wouldn’t have to talk about it…

LUANA PIOVANI seen on the beach, topless, next to her new love. Her first boyfriend was a young Londoner from a traditional family in the city. That was years ago, when she was starting her lauded modeling career.

TAURUS had its shares increased by 4 times. It is the largest arms manufacturer in Brazil. It’s gaucho. Brazil now has almost one million registered and legalized weapons. Five years ago it had 220,000.

HERE IN LONDON there is only one store that sells weapons. There was one at the Catuaí mall, but it left there a couple of years ago and I can’t say for sure what happened to it. There was another store on Leste-Oeste (which is Avenida Dom Geraldo Fernandes).

With the Ambassador of India

The ambassador of India, Suresh Reddy, received at his residence this week, in Brasília, the federal deputy Luísa Canziani and the former municipal secretary of Londrina Alex Canziani (photo), for a special lunch. On the occasion, they discussed the collaboration of projects with India in the area of ​​professional and technological education. Through an existing partnership with Fundação Araucária, Alex dreams of bringing a C-DAC unit, an Advanced Computing Development Center, the main R&D, Information technology and electronics Ministry of Electronics and Information Technology of India. Also present were the foundation’s International Innovation agent, Jorge Edison Ribeiro, and the institution’s institutional relations advisor, Cristiane Cordeiro. Receive our news straight to your cell phone! Also send your photos to the ‘The city speaks’ section. Add FOLHA’s WhatsApp through the number (43) 99869-0068 or through the link wa.me/message/6WMTNSJARGMLL1

Previous dates, times and broadcasts of the round of 16
Next Santos vs Inter: see lines drawn by VAR in Peixe’s disallowed goal | saints

In an interview with Happy Sad Confused, Brett Goldstein joked about how his Hercules might …