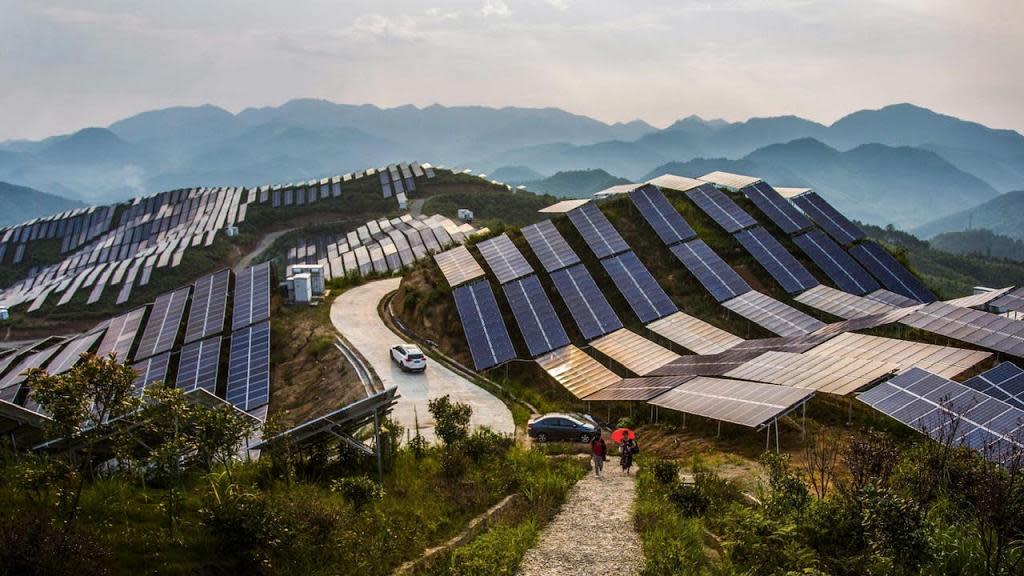 China on EU path to energy independence from Russia

THE war gives Ukraine triggered by Russia exposed dependence on European Union From fossil fuels Russians and accelerated the transition from the European bloc to the renewable energy.

But while no country has a monopoly on sun and wind, the EU is highly dependent on Chinain the sector.

More than 80% of the world’s supply of PV modules produced annually since 2010 has been manufactured in Asia. China alone supplied 67% of module production in 2020, according to the Fraunhofer Institute for Solar Energy Systems.

In fact, eight of the top 10 solar panel companies and manufacturers in the world are Chinese, with Canadian Solar and US company First Solar occupying 8th and 10th places respectively.

In the wind, European companies still have the advantage, with the Danish Vestas and Siemens Gamesa in the top two places on the podium, while the German Nordex is the 8th largest manufacturer in the world.

China is rapidly gaining ground with six of its companies in the world’s top ten. Beijing’s grip on the renewable sector is felt throughout the supply chain.

About 80% of the components needed to make a wind turbine are produced in China, as are 97% of the silicon wafers needed to build a solar panel.

“There was some malicious behavior on China’s side (…)”

How to equalize the global recovery

The second Annual Qatar Economic Forum, powered by Bloomberg, will be held in Doha from 20 to 22 June 2022.

Forty-five percent of the world’s production of polysilicon, a key raw material in the solar PV supply chain, is produced in Xinjiang, a region in northwest China, where the Chinese regime is accused by the US government of carrying out genocide. against the Uighur Muslim minority.

China is also a major player in other raw materials, including rare earth minerals that go into renewable technologies. More than 70% of lithium-ion batteries that entered the market last year were produced in China.

“We cannot afford to rely on China for the most viable types of industries and the most viable networks, such as telecommunications and energy infrastructure, which in the future will be increasingly digitized.”

But the EU, so far, tends to avoid any major trade conflict with China.

In 2012, the European Commission, after a petition from European solar energy manufacturers, launched an anti-dumping and anti-subsidy investigation into Chinese solar panels, which were starting to invade the European market at a reduced price compared to the equivalent. produced locally in Europe.

China retaliated and launched its own anti-dumping and anti-subsidy investigation into EU wine imports and hinted that it would do the same in the luxury car sector. It ended up reaching an agreement in 2013 that established a minimum price for Chinese products. European professionals called the deal a “capitulation” by EU authorities and a failure to protect their own industry.

Since then, there have been a few “cases of what we might call political blackmail,” said Maria Pastukhova, a Berlin-based senior policy adviser at E3G. The expert accuses China of taking advantage of its economic influence to pressure other countries and gave the example of a decision by Beijing in 2010.

That year, China decided to ban all exports of “rare earths” to Japan. In other words, it stopped selling to the Japanese rare minerals essential for the technological industry, minerals that China held on a large scale. The political measure arose from a diplomatic crisis that began on September 7, 2010, after a Chinese trawler collided with two Japanese coast guard boats in an area of ​​the China Sea, an area disputed by the two countries. ,

In addition to this conflict, this year, hackers – allegedly sponsored by the Chinese state – were accused of carrying out cyber attacks against an Indian power grid on the Kashmir border between India and Pakistan.

“So there was some malicious behavior on China’s side that has been associated with political conflicts with other countries,” Pastukhova emphasized.

Subsidies and economies of scale

Europe is a significant consumer of renewable technology. More than a fifth of the total cumulative global PV installations were carried out on the continent in 2020 and this could accelerate dramatically as Europe aims to become the first carbon neutral continent by 2050.

To achieve this, the bloc plans to reduce greenhouse gas emissions by at least 55% from 1990 levels by the end of this decade and increase the share of renewables in power generation to at least 40%. This will require installation of wind and solar energy capacity to triple over the next seven years.

All these numbers face China as a partner in the import of technological material. The two big European wind farms – in Taranto, Italy, and Senj, in Croatia – have Chinese turbines.

For Pastukhova, the challenge is twofold. The first is the economy of scale, that is, the Chinese authorities give little autonomy to national companies and boost business with local companies that end up growing much faster.

The other challenge is production costs. “European companies are producing at a much higher cost because we are talking about higher environmental standards, more rules in the labor sector, also higher wages,” he added.

Europe at the forefront

However, when it comes to real technology, Europe still leads the way.

“There are still very innovative developments in the US, Japan and Europe, especially when it comes to flexible panels, when it comes to the high-efficiency scale of solar energy production,” Pastukhova emphasized.

The prognosis is the same for the wind, where “Europe is still at the forefront,” according to Luke Patey, a foreign policy and diplomacy researcher at the Danish Institute of International Studies.

One way to measure innovation is through the production of patents, he explained. China produces more than a third of patents in wind technology – the highest number by far – with the US and Germany producing around 10% each. However, when looking at world-class patents, the kind that really push the technology forward, Germany has about half of them, while China only patents 2%.

In addition, production is only a part of renewable energy projects, maintenance and operational maintenance of wind turbine farms is another important component.

“The Chinese have so far focused on lowering product prices and not efficiently managing a wind farm for several decades. They need to gain experience in this area. And that will prevent inventors from getting involved with the Chinese, because they don’t have same experience managing projects,” said Patey.

Still, time is of the essence to fight climate change and global warming and to protect European companies from renewable technology. However, time is exactly what the EU needs to mitigate its dependence on China.

Adopting a Chinese strategy of giving local companies preferential treatment for local projects is not a good option, according to Oertel, because it “is not in the European DNA. “

According to experts, the right way would be to support companies in the bloc so that the panels and engines that power Europe are not built on forced labor or practices harmful to the environment, as in China.

The EU is also increasingly looking at key “friendly” supply chains, including energy.

Commission President Ursula von der Leyen addressed the International Solar Alliance when she visited India in April this year. New Delhi is trying to position itself as an alternative to China by increasing renewable production.

Peer-to-peer partnerships with developing countries that have raw materials and want to expand their industries should also be one of the tools used by the EU, argued Pastukhova.

This would allow for more production centers around the world and lower prices, while also allowing these developing countries to stimulate their domestic industrial growth and ultimately buy more renewable technologies. It is also something that China itself already does with factories in Malaysia and Indonesia, among others.

EU considers jumping to a target of 45% renewable energy by 2030. But European production must also be protected, said Patey, lamenting “an increasing number of plant closures in Europe”.

“The EU can go on the attack and support companies trying to sell to international markets and do what China does to some extent, offering low-financing or low-interest loans to developing countries so that investors in Siemens Gamesa and in other wind companies can expand globally and compete with China at the same level”, he argued.

The 27 countries must make tough choices now, because “they won’t have an immediate impact,” explained Oertel.

The expert told Euronews that these decisions must be communicated clearly to the 450 million inhabitants of the bloc who are now aware of the issue of energy dependence due to the War in Ukraine, so that they know the risks and what could be coming.

“It takes honesty on the part of government officials to recognize that there are other dependencies and that all is not well,” said Oertel.

Previous EU forces Apple to adopt USB-C ports on the mainland – Link
Next On a disastrous night, Flu lives up to the reputation of “Robin Hood” and loses to Atlético-GO