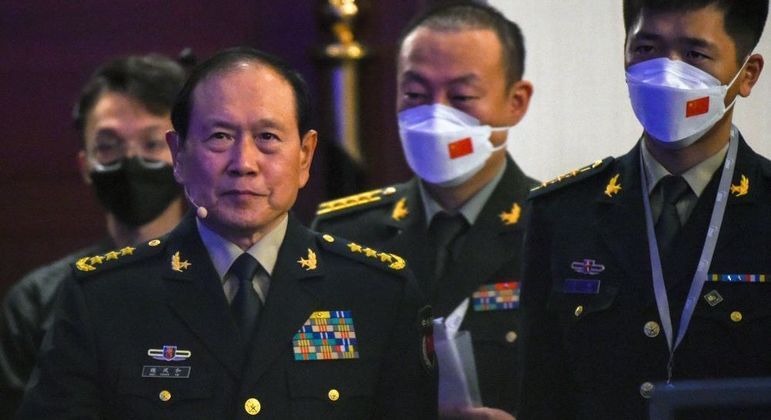 China “will fight to the end” to prevent Taiwan from declaring its independence, the Chinese defense minister promised on Sunday, at a time of escalating tensions with the US government over the island.

In recent days, fighting has escalated between the two great powers over Taiwan, the democratically self-governing island that Beijing considers part of its territory awaiting reunification, including by force if necessary.

Frequent air raids by Chinese fighter jets near Taiwan are fueling tensions, and on Saturday, Pentagon chief Lloyd Austin accused China of sustaining “provocative and destabilizing” military activity in a speech at the Shangri-la Dialogue, a security forum that takes place in Singapore.

At the time of his speech at the same event, Chinese Defense Minister Wei Fenghe responded that his country “has no other option” to fight any attempt to separate Taiwan from China.

“We will fight regardless of the cost and we will fight until the end. This is the only option for China,” he said.

“No one should underestimate the resolve and ability of the Chinese Armed Forces to safeguard their territorial integrity,” he said.

The minister also issued a warning and declared that “those who seek Taiwanese independence in an attempt to separate China will definitely come to a bad end”.

At the same time, the minister also adopted a more conciliatory tone on some points, defending a “stable” China-US relationship, which he considered “vital for global peace”.

During his speech, Austin also expressed a desire for the lines of communication with Chinese authorities to remain open.

The two had their first face-to-face meeting on Friday, on the sidelines of the event in Singapore, which was marked by disagreements over Taiwan.

Tensions between China and the United States over the island have increased with increasing Chinese air incursions into Taiwan’s air defense zone.

On a visit to Japan last month, US President Joe Biden appeared to end the historic stance of “strategic ambiguity” on Taiwan when, in response to a question, he said Washington would defend the island in the event of an attack by Beijing.

The White House has since insisted that it has not changed policy.


DISPUTE BY THE SEA

Despite the tensions, analysts noted that Austin’s meeting with Wei shows a faint glimmer of hope.

Talking is always better than not talking,” Ian Chong, associate professor of political science at the National University of Singapore, who attended the summit, told AFP.

“But I believe that at this moment we will not see progress. Maybe in the future it will lead to something”, he added.

The dispute is the latest in a series of disagreements between Washington and Beijing, ranging from South China Sea issues to human rights and the war in Ukraine.

China claims sovereignty over most of this sea, an area rich in resources – and through which trillions of dollars of goods pass through each year – that is disputed with Brunei, Malaysia, the Philippines, Taiwan and Vietnam.

China, whose maritime claims were rejected in a landmark 2016 ruling by The Hague, has been accused of sending planes and ships to territories claimed by other countries.

In a sign of de-escalation, Wei met for an hour with Australian Defense Minister Richard Marles on the sidelines of the meeting that ended on Sunday.

Relations between the two countries have been marked by moments of tension in recent years, including a clash over Australia’s calls for an independent investigation into the origin of the coronavirus, to which China has responded with a series of import tariffs.

In another aspect of the international forum, Fiji’s defense minister said that for this island nation the main threat is not conflict, but climate change.

“Weapons, fighters, ships are not our main concern,” said Inia Seruiratu. “The biggest threat to our existence is man-made and is devastating climate change,” she said.

Previous Galo and Santos: poorly marked penalty, poor performance by the miners, and more…
Next Vasco fans criticize the arrival of coach Maurício Souza on the web: ‘Never’