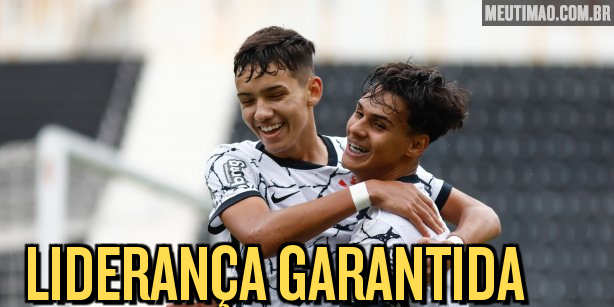 This Saturday morning, Corinthians beat Audax 3-0, at Parque São Jorge, in a match valid for the tenth round of the Campeonato Paulista Sub-17. The alvinegro goals were scored by Gabriel Moscardo, Roberto and Guilherme Henrique.

With the victory, Timão reached 21 points and overtook Audax, ending the first phase in the lead of Group 09 of the competition. The alvinegra team had already secured qualification for the next stage of the tournament in the last round, when they beat Juventus.

In the first game between the teams, Timão lost to Audax, 1-0, in Osasco. At the time, Corinthians went with an alternative team for the match, as it turned its attention to the Copa do Brasil Sub-17.

The second phase of the championship will be divided into groups. There will be eight groups with four teams, with the top two from each advancing. The 16 classified go to the third stage of the competition. The Paulista Football Federation (FPF) should release the details soon.

Remembering that Timão is in search of the championship. Last year, Corinthians was champion of Paulistão Sub-17, on top of Palmeiras, at Allianz Parque.

Before the game for the Campeonato Paulista Sub-17, Corinthians and Audax faced each other in the sub-15 category of the state competition. The alvinegro club won the match 3-0, at Parque São Jorge. Timão’s goals were scored by Nicolas Araújo, Araújo and Gui Negão.

The alvinegra team played with Nicollas, Lucas, João Gabriel, Lorenzo and Teixeirão; Miguel, Dieguinho, Vitinho and Kauã; Molina and Nicolas. The youngest are also classified for the next phase and are awaiting the FPF definitions.

Coach Guilherme Dalla Déa went to the duel against Audax needing to win to take the lead in Group 09 of Paulistão Sub-17. With that, Corinthians entered the field with: Felipe Longo, Victor Oliveira, Gustavo Henrique, Willian and Caipira; Vitor Robson, Gabriel Moscardo and Adrian; Guilherme Henrique, Roberto and Juninho.

The match started with Audax raising their mark and pressing the ball out of Timão. At the fourth minute, the goalkeeper from Corinthians, Felipe Longo, missed a pass and kicked the opponent’s attacker, who finished and was blocked by the Corinthians defense. It was the first dangerous move of the game.

Until the tenth minute, Audax managed to keep the marking pressed and did not let Corinthians play. Timão managed to get out little by little, using the right side a lot with Juninho. The midfielder Gabriel was the player who was coming closer to the goal, he had already managed two good kicks and in the 17th minute he was awarded. In a set piece, Adryan took the free kick at the foot of the midfielder who didn’t forgive him and swung the opponent’s net.

From the goal scored, the match was more controlled by the alvinegra team. Two minutes after opening the scoring, Timão had a great counterattack to extend the advantage. There were four Corinthians players against three opponents, but Roberto ended up missing the pass and missing a great opportunity for the black-and-white.

Audax were again in danger in the 25th minute. In a quick counterattack, the attacker of the opposing team, Willian, made a good move and finished with danger, forcing the archer Felipe Longo to make a great defense.

The opposing team pressured Timão’s ball out again and grew in the match. Corinthians began to have difficulty playing. The Audax left a lot of space in its defense and the black-and-white sought an escape on the counterattack.

At the end of the first stage, Corinthians that extended the score. In an unpretentious move, the Corinthians striker, Roberto, pressed the ball out of Audax and shared the ball with the opposing defender, who ended up surprising the goalkeeper who was waiting for the pass and the ball went straight to the goal. Thus, the first stage ended in 2 to 0 for Timão.

Corinthians came back from halftime pressing. Even with the changes made by coach Guilherme Dalla Déa, Timão arrived at the beginning, at three minutes, on two occasions. Roberto in a good header and then in a kick by Gabriel Moscardo, which ended up being deflected in the opposing defense.

The Audax responded shortly thereafter. In a quick counterattack, the team from Osasco arrived in danger, demanding that Felipe Longo made a defense, in a kick from outside the area that had the address of the Corinthians goal.

In the 12th minute, both teams were in danger again. First the Corinthians. Adryan took a free-kick on the side of the field and ended up hitting the crossbar, almost scoring Timão’s third goal. In the next move, Audax set up another quick counterattack, but ended up failing in the submission and losing a good chance.

The game slowed down after half of the final stage. Corinthians controlled possession of the ball and did not suffer defensively. However, the alvinegro team also stopped bothering Audax.

Timão was in danger again in the 24th minute. Adryan made a good move on the right side and crossed in Willian’s head, who ended up heading badly, missing a great opportunity to score the third Corinthians goal.

In the 31st minute of the final stage, Corinthians extended the score. Ruan, who had just entered the match, made a great move from the side and crossed to Guilherme, the striker took a volley and scored a great goal for Timão.

The last nine minutes were pretty smooth. Corinthians managed the score and spared its athletes. Audax couldn’t show any kind of reaction. The match ended 3-0 for Timão.