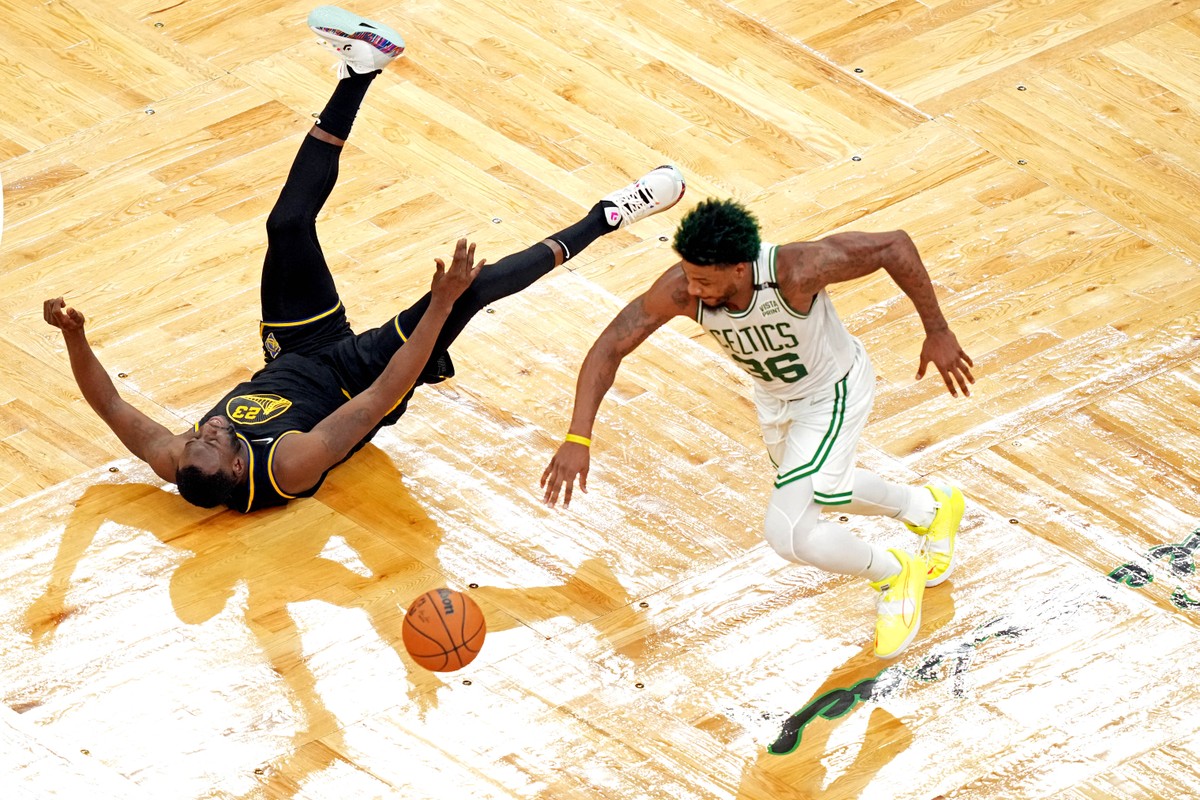 Draymond Green no big presentations. Three-time NBA champion and two-time Olympic champion, the American is one of the main players in this Golden State Warriors dynasty. Seen as a team leader, he is often responsible for guiding and firing the team on the court. However, the player is not able to reflect in the finals against Boston the victorious curriculum. In the four games so far, the pivot has been well below expectations and has an unfavorable statistic: adds more fouls than points (18 to 17) in this final series from the NBA.

+Analysis: Curry and Kerr’s courage are decisive against an unstable Celtics

Draymond Green goes down in the match against the Celtics — Photo: Kyle Terada-USA TODAY Sports

Draymond Green has fallen short of expectations. It is true that of the trio of stars at Golden State, Klay Thompson has also not shone like he used to. Only Stephen Curry maintains strong numbers to lead the California team. Green, however, has sinned more for the lack of intensity and suffered from the speed of the Celtics’ attack – the best of the last three months of the regular season -, led by the young Jayson Tatum, Jaylen Brown and Marcus Smart.

In addition, he has been losing the fight inside the paint not only to Robert Williams III, eight years younger, but also to veteran Al Horford, four years his senior. One of the scenes so far from the finals was precisely Al Horford passing Green at the end of Game 1, in which he scored 26 points in the Celtics’ victory, and celebrating, something the Warriors star likes to do.

+Curry scores 43 points, and Warriors tie the series with the Celtics
+Curry and his epic performance in game 4 of the final: numbers and marks

In the first game of the final series, in front of the Californian crowd, Draymond Green scored four points and made six fouls in the defeat of his team. Despite this, he still managed to help with 11 rebounds, but had only 16.7% shooting, in addition to committing three turnovers.

The team recovered in the second confrontation, in the best (or least worst) game of the pivot offensively, Green was responsible for nine points (66.7% of use in the shots) and made “only” three fouls. In the following duels, however, the American’s record became even more dramatic: in the third duel, he scored only two points and committed six infractions, leaving the match before the end, while in the fourth duel between the teams, this Friday, he scored only two points again and made three fouls.

The poor performances in Boston drew attention and raised questions.

“I have to be more aggressive on both sides of the court, not just defense or offense,” Green.

Golden State coach Steve Kerr even sacked Draymond Green in the final period of Game 4 with 7:32 left for the timer to run out. The shirt 23 had his worst shot in the series against Boston: 14.3%. The coach’s move made the team grow and forward the victory by scoring 11 to 4, while the athlete watched the match from the bench.

”He’s an extreme competitor… He made great plays in the final stretch. This is a tough series for him to score because of Boston’s size and athleticism, but he’s still impacting the game on a huge level.”

It is true that Draymond Green was never the offensive reference of a Golden State that already had in its cast Stephen Curry, Klay Thompson and Kevin Durant. The problem is that he has been playing below criticism in what has always been prominent, the defense. In fact, Green has already won the NBA Best Defensive Player award in 2017.

– I’m never happy to leave the court with 7 minutes to go in a game that we need to win. I’m not going to sit around and act like I’m vibrating. I’m a competitor. But at the end of the day, if that’s what the coach decides, then you accept. I had to keep my head in the game. Every time he came back, he tried to make a few plays. That was just my mindset,” said Green at the end of Game 4.

In this season’s playoffs, Green had a positive lead of +4.5 points. That is, while he was on the court, the Warriors beat their opponents. In the Finals against the Celtics, however, that changed. With him in action, the advantage is -1.8 points.

The final series is tied at 2-2. Draymond Green will have at least two chances to redeem himself. The next appointment is in front of their fans, on Monday (13), while game 6 is scheduled for Thursday (16), in Boston.

Previous Scientists confirm that tortoise is considered extinct species
Next Elderly beheaded in Flamengo was married to ambassador; The couple’s daughter was born in the US