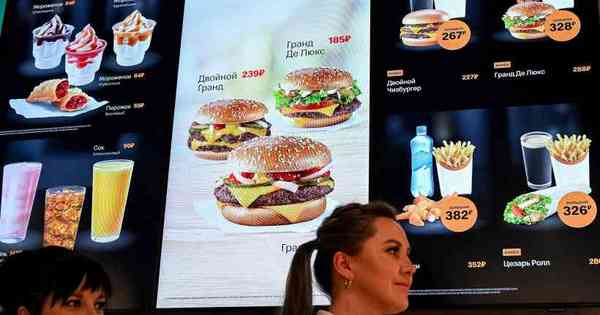 End of an era: McDonald’s reopens under new name in Russia

“The name changes, but the love remains”: this is the motto with which the old McDonald’s units reopened this Sunday (12/6) in Russia, now as a local brand, after the American chain left the country due to the conflict in Ukraine.

The former restaurants in Russia of the McDonald’s group, which announced its departure from the country after more than 30 years of presence, were renamed “Vkousno i tochka” (“Delicious. Full stop”) by their new Russian owner.

The characteristic yellow logo has been replaced by two stylized orange stripes that represent two French fries accompanied by a red dot.

“We try to do everything so that our customers do not notice any difference, neither in the environment, nor in the taste, nor in the quality”, said the CEO of the group that took charge of the chain, Oleg Paroyev.

The new owner of the fast food chain in Russia, businessman Alexander Govor, guarantees that the 51,000 former McDonald’s employees across the country will keep their jobs.

He also promised that the flavor will not change and that he will work to improve the network.

“We hope that the number of customers will not decrease, but increase. Even more so now that it is an all-Russian company”, declared Govor.

“I am very proud to have been given the honor of developing this company. I am ambitious and plan not only to reopen 850 restaurants, but also to develop new ones,” he said.

Alexander Govor, 62, has operated since 2015 under the McDonald’s franchise 25 restaurants in several cities in Siberia since 2015. He reached an agreement to buy the business on May 19, three days after McDonald’s announced its withdrawal from the Russian market.

McDonald’s had been in the country for over 30 years and was one of the first windows that the country, which was still the Soviet Union, had on the western world. For this reason, it was a very popular brand and represented around 9% of the American group’s revenue.

The first Russian-owned restaurant opened at noon on Sunday, local time, in Moscow’s Pushkin Square, with the right to queue at the door.

This is the historic spot where Russia’s first McDonald’s opened, with long lines, in January 1990, just under two years before the collapse of the Soviet Union.

On Monday, 50 more stores are due to reopen, and soon, the chain expects to resume activities at 50 to 100 restaurants a week across the country.

Paroyev said the company had to remove some items that directly reference McDonald’s, such as McFlurry and Big Mac, from the menu. The packaging became neutral, as no item can reference the McDonald’s group.

Paroyev said that hamburger prices will be slightly higher than the American chain due to inflation in Russia, but assured that they will remain “affordable”.

Moscow Mayor Sergei Sobianin visited the flagship cafeteria in the morning and announced on the messaging app Telegram that “the quality of service will remain the same”. Fifteen points of sale of the network open this Sunday in the Russian capital.

The McDonald’s group, which temporarily closed restaurants in Russia at the beginning of March, announced on May 16 the definitive departure from the country and the sale of operations, citing the need to “remain inflexible in its values”.

Previous Use the Nubank card on WhatsApp to send and receive money
Next Vasco x Cruzeiro records seventh largest audience of the year and breaks Serie B record; check out top 10 | statistical spy