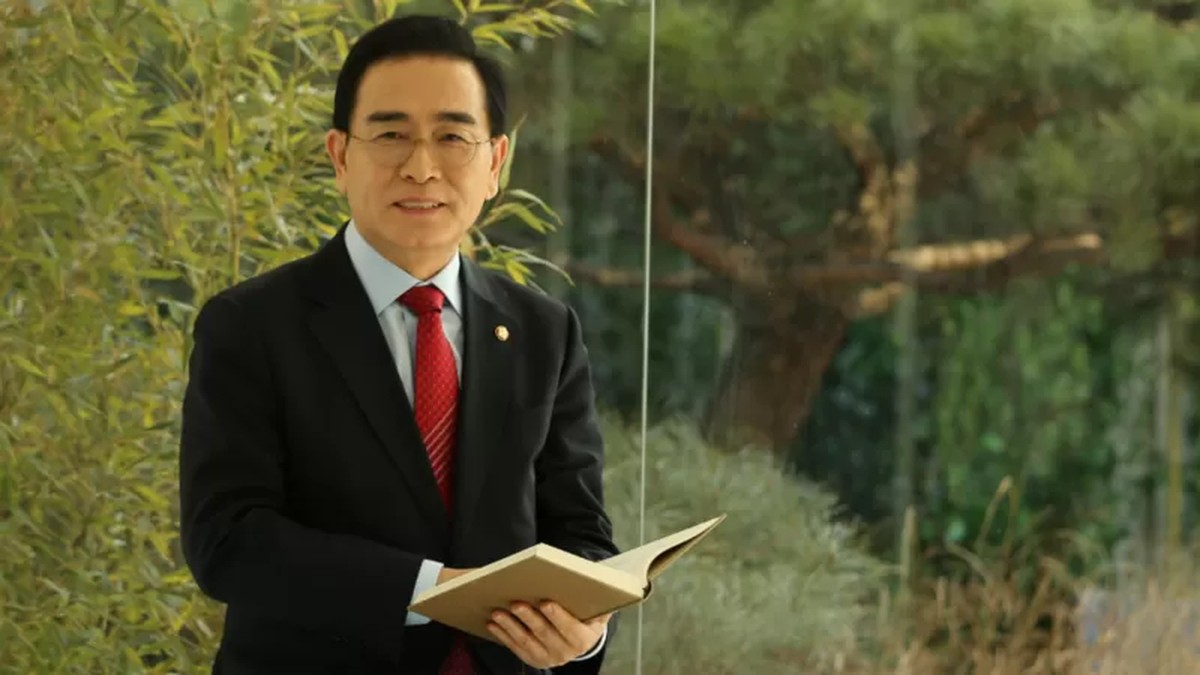 Have you ever wondered what life is like for high-ranking officials in the North Korean government?

Thae Yong-ho was the country’s deputy ambassador to the United Kingdom until he defected in 2016.

He tells firsthand how and why he risked everything to escape the North Korean embassy in London for a new life in South Korea. There, he was elected deputy in April 2020.

This is the story of how he managed to run away in search of freedom and a future for his children.

I chose freedom, but at great risk to myself. I will tell my story, a story of hope.

I was born into a family where my father was a university professor and my mother a school teacher. I have an older sister and a younger brother.

When I was about 12 years old, my mother put me in a foreign language school in Pyongyang. I wanted to be an astronaut, but that was very difficult.

She told me that diplomats could visit foreign countries and even travel by plane, and that changed my mind.

In that moment, I felt a sense of privilege. North Korea is a class society and the population is divided into three categories.

The class you belong to is very important in North Korea because it defines where you live and what kind of education and work you can get.

I was born in the main class at North Koreawhich is perhaps 20% of the population. If you’re born into the top class, you can live in Pyongyang, where there’s good infrastructure, good schools, universities, subway, shops, or whatever.

But if you are born into a lower class, most people’s lives revolve around coal mines in very remote rural areas. They are forced to work very hard.

THE North Korea is a slave system in the 21st centurybecause there is no freedom of movement or choice.

The entire population of North Korea, including myself and my family, has been brainwashed as if the ruling Kim family members are God and the nation’s great saviors.

Kim family members inherited their privileges. Leadership passes from generation to generation. Thus, the national assets and resources are under the total control of the Kim family.

North Koreans are trained and brainwashed to cry when they see members of Kim’s family. This is the product of a long education.

When I joined the diplomatic service in 1988, it was a very troubled period. The North Korean establishment was somewhat shaken by the Seoul Olympics that year and the fall of the Berlin Wall in 1989.

The Soviet Union, a longtime ally of Pyongyang, collapsed in 1991.

North Korea has suddenly lost its trading partners. It was chaos for three or four years.

My first overseas post as a diplomat was in Denmark in 1996, when I was 34 years old.

When I arrived in Copenhagen, I was surprised because I expected to see beggars on the streets. The novels we were allowed to read in North Korea were in the style of Charles Dickens’ Oliver Twist, so our image of the Western world is from the 1920s or 1930s.

But no, Denmark was a new world. Everyone lived on an equal footing, education was free, medical care too.

From time to time I sent money to my parents and relatives in North Korea. At that time, there was a lot of famine in our country.

As of January 2009, no one in the North Korean establishment knew of Kim Jong-un’s existence.

Will Kim Jong-il’s son inherit his leadership? Did that mean we would have to wait another 40 or 50 years? If we waited another 40, 50 or maybe 60 years, what would my children’s future look like? Or even my grandchildren?

So I started thinking about my future.

North Korea has a personality cult of its leaders. Portraits like the one pictured (of founder Kim Il-sung with his son and successor Kim Jong-il), as well as statues, are ubiquitous in the country — Photo: BBC/GETTY IMAGES

I was on my second stint in London (the first was between 2004 and 2008) and this kind of frustration started to build. And one of my jobs was to defend the North Korean system and its leader, Kim Jong-un.

Although I worked very hard to defend North Korea’s leadership and system, even though I always responded with a smile, my heart actually lived a different story at that time.

In March 2016, there was a very shocking incident in North Korea. About 12 or 13 North Korean girls defected to South Korea together.

Therefore, the North Korean system decided to summon all children of diplomats aged 25 and over to return to the country as soon as possible. And at that time, my first child was 25 years old.

So I thought: what kind of legacy could I give my son? As a human being, freedom is the most important thing. And as a father, the legacy I can leave for my children is freedom. So I decided that my son would be a free man.

In London, people went to bars to watch football matches. So one day I said to my boss, “Hello Ambassador, I want to go see this game. My wife, son and I plan to go to the nearest pub to watch it.”

When we left the embassy, ​​we started to run, but after 100 meters, we all stopped. I don’t know why, but we stopped. We turned around and saw our embassy. And then I thought: is it right to defect? What could happen to my family or friends in North Korea?

Tears started to flow because I had worked so hard to defend that embassy and its flag.

There was a little pause, but I said, “No, let’s take our chances.” We keep running and disappear.

The more time I spend here in South Korea, the more I appreciate my freedom, and I think I should work harder to give North Koreans, including my family members, that kind of freedom.

South Korea is really ready to reconcile with North Korea. I think they can reconcile and reunite peacefully. Peace is most important.