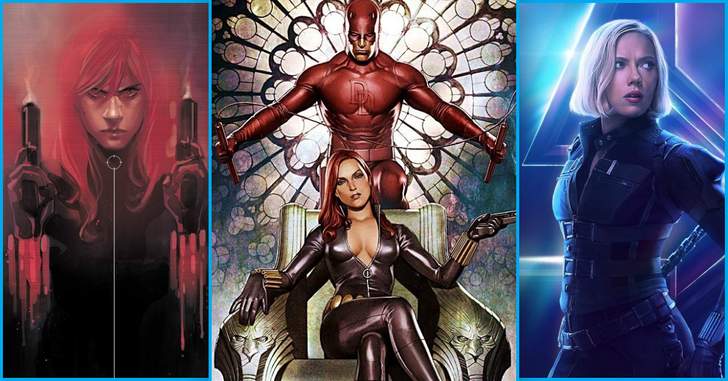 All About Marvel’s Black Widow

Do you know everything about the most lethal spy in the Marvel Universe?

One of the great characters popularized by the Marvel Cinematic Universea Black Widow is a figure with a rich and very important history in comics, having started her career as a villain and gone through a great journey of redemption, until she became one of the most courageous heroines that have ever been in the comics. Avengers.

Known by many names — from Natalia Romanova up to the “Americanized” version, Natasha Romanoff –, the character bears many similarities to her counterpart in the MCU, but also many differences, in addition to being an ally of several unusual heroes in the comics. Here, we gather Everything you need to know about Black Widow!

In January 1964, the 52nd edition of the HQ hit North American newsstands. Tales of Suspensea title that at the time was starring the Iron Man. The magazine has the very first appearance of the Black Widow in the stories of marvel comicshaving been a creation of Stan Lee and the illustrators Don Rico and Don Heck.

Although today she has been popularized as a great hero in the service of agencies such as SHIELD and groups like the Avengers, the spy was initially a major Soviet villain, who tried to steal and sabotage plans from the US government and Tony Stark, who was seen as a major threat by the KGB. Only later did the character gain her redemption plot.

Before adopting the “Americanized” name Natasha Romanoff, the spy we know as Black Widow was Natalia Alianovna Romanovaa woman trained, from a young age, by the red rooman organization with ties to the KGB, which trained young women to become lethal assassins and spies to serve the Soviet government.

As a young girl, Natalia was married as Alexi Shostakovnot knowing that he was, in fact, the red guardian, a great Soviet hero. In some versions of the character’s story, she would have been a ballerina, while in others retconsthis is nothing more than a series of memories implanted in Natalia to guarantee her an appropriate disguise.

In her early years, she was sent to the United States to infiltrate and sabotage American projects. Eventually, the character goes through a redemption plot and is invited by the captain America to join the Avengers. With this, Natasha Romanoff becomes a genuine ally for the Americans, helping to face various villains and secret agents.

For much of its history, the Black Widow participated in several heroic groups in comics. She emerged as an occasional ally to the Avengersbut soon became an official member of the team, alongside a group of former villains such as Archer hawkO Mercury and the Scarlet Witch.

The character has always had a strong connection to Earth’s Mightiest Heroes, participating in various “subdivisions” of the team, such as the new avengersyou mighty avengers during the Civil war and a tactical team called the secret avengers. More recently, she joined the wild avengers.

She was also part of the original lineup of the champions, a group that emerged in the 70’s and had “unusual” members. Other of its holdings include: the Heroes for Hirea Infinity Brigadeyou marvel knights and also the liberating ladies. Finally, the spy also has an affiliation with the SHIELD.

Despite having been part of several teams over the years, the Black Widow is also well remembered for the partnerships established with specific heroes. In her beginnings in the comics, she was a great ally of the Archer hawkand both began their careers as recurring villains in Iron Manbefore becoming members of the Avengers.

Subsequently, Natasha appears in several adventures of the captain America – who helped her find redemption – and from Iron Man. In the 70s, the spy began a long partnership with the demolisher, and this eventually developed a romance between the two. To this day, she has a great affection for the Man Without Fear.

In more recent phases, the character has become very close to the winter soldierincluding some retcons tell how she was trained by him when she was still in the Red Room. The two also had a troubled romance, and sometimes they bump into each other and help each other in the comics. Another partnership that should not be forgotten is with Jessica Drew, the Spider Woman.

As in the cinema, the program of black widows in the Red Room developed not just the heroine we know, but several lethal assassins, who served as spies around the world. Most of them haven’t been explored in the comics, but there are a few that stand out. Stefanya Melnikova, Anya Derevkova and Yelena Belova.

Of all these, Yelena is the most famous, having spent years as a villain and rival to Natasha. After its presentation at Marvel Cinematic Universethe character underwent a revamp in the comics, adopting the codename white widow and becoming an ally to Natasha as they try to free the Black Widows who are still held hostage in the Red Room.

In comics – unlike its cinematic counterpart – the Black Widow underwent tests and experiments at the hands of the Russian government, and received a variant of super soldier serumalthough much less powerful than the original version, belonging to the captain America. With this serum, she has increased longevity and slightly superhuman physical attributes.

Natalia Romanova It is expert in different types of fighting, such as judo, boxing, aikido, savate and karate, as well as being a professional acrobat and dancer. The character is proficient with several types of melee and firearms, as well as being a master of disguise, detective, strategist and knowing espionage tactics. She is also multilingual, having mastered over six languages.

outside of the comics Natasha Romanova It has had several adaptations over the years. For starters, there are two character-focused books written by Margaret Stohlbeing them Eternal Red and red revenge, both already published in Brazil. In addition, the character almost had a solo film for the Lionsgatewhich would have David Hayter as director, before being cancelled.

In animations, the character has appeared in the series: Hero Squad, Avengers: Earth’s Mightiest Heroes, Avengers Assemble, Ultimate Spider-Man, Marvel Future Avengers and many others, in addition to animated films The Ultimates, The Ultimates II, Avengers Confidential: Black Widow and Punisher and Iron Man: The Battle Against Ezekiel Stane.

In addition to its previous adaptations, the Black Widow gained a large share of the Marvel Cinematic Universeappearing for the first time in Iron man 2from 2010. Since then, the heroine has been in eight films (and a post-credits scene in another), the last of these being the character’s own solo film, released in 2021.

The character is played by Scarlett Johansson and her story is very similar to the comics: she was originally a Russian agent turned villain, but when we meet her, she is already a spy in the service of the US and the United States. SHIELD. In the film version, she is one of the founders of the Avengers and has been present in all of the team’s films so far.

The heroine had a great arc throughout her eleven years of participation in the films of the MCUhaving sacrificed himself in Avengers: Endgame in order to ensure that the heroes had a chance to defeat Thanos once and for all. His solo film, in turn, is situated between the events of Civil war and infinity warand introduces the franchise’s new Black Widow, Yelena Belova.