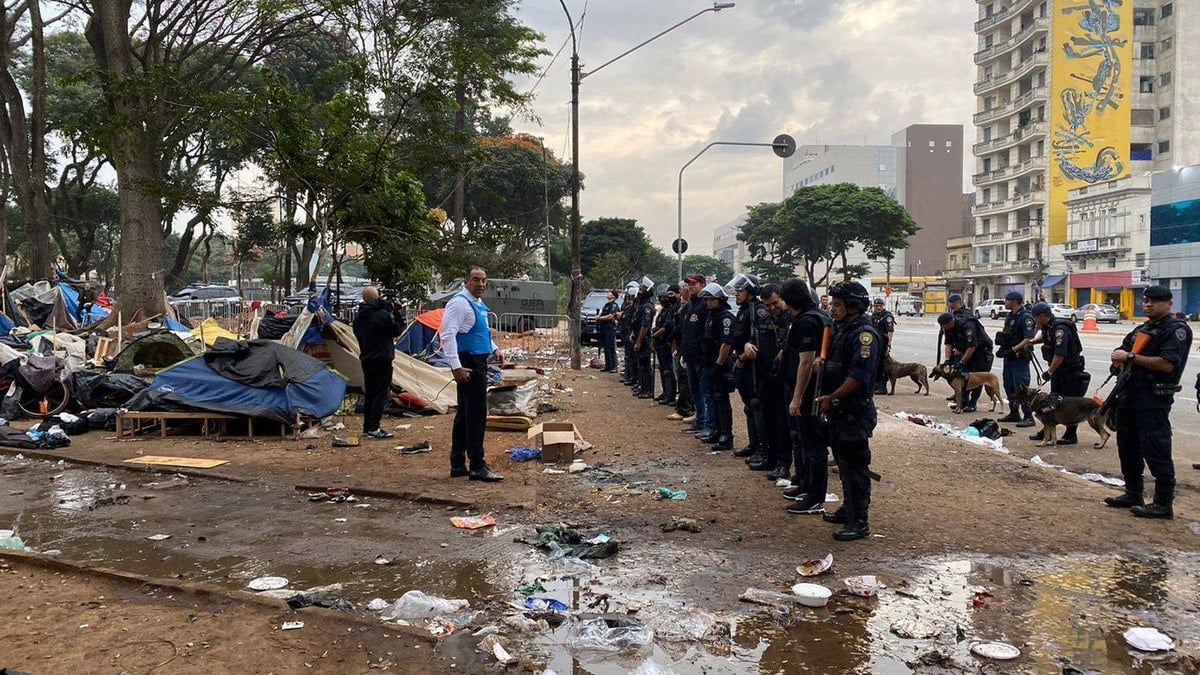 Is it possible to end Cracolândia? Understand what can be done | Police

Cracolândia, as the region in downtown São Paulo occupied by homeless people, many of them crack users and drug dealers, is known today, emerged in the 1990s, in the Luz neighborhood — more specifically in a part comprised by the Cleveland avenues, Dino Bueno, Nothmann and Helvetia Street, where he stayed for a long time. The first crack seizure in the capital of São Paulo was reported on June 22, 1990. More than thirty years later, the problem persists.

Since the formation of Cracolândia, politicians from different parties have passed through the city hall of São Paulo. Many tried to put an end to Cracolândia — some, like João Doria (PSDB), even promised to do so. There were several different strategies, from the most repressive, such as “Operation Pain and Suffering”, to the most welcoming, such as the program “De Braços Abertos”, launched by Fernando Haddad (PT). But so far, none of them have succeeded.

After all, would it be possible to end Cracolândia? Maybe yes. But, for that, it would be necessary to think of a strategy that contemplated the complexity that the problem deserves, according to the psychologist and harm reducer Bruno Logan. For him, since the emergence of Cracolândia, the only type of intervention that the State has taken to that territory has been of a military nature — which does not and has never led to anything.

“Whether it’s drug use, brothels or any other issue, the police always find some justification for getting there beating and shooting. I believe that Cracolândia still persists precisely because of that – because the executive branch wants to give a simplistic answer. , of repression, to a complex problem”, he says.

For public security specialist Rafael Alcadipani, a professor at FGV (Fundação Getúlio Vargas), the issue is also quite complex. He believes that, together with urban reordering actions and health policies, one of the measures that must be taken to combat Cracolândia is the destabilization of drug trafficking — always bearing in mind, of course, the preservation of rights.

According to Alcadipani, for the first time, the police are taking more “intelligent” action in this regard. This is because the agents would be acting constantly and arresting the traffickers in a structured and organized way. “It’s a measure that, in the long run, works, because the trafficker has no peace. And where he doesn’t have peace, he leaves.”

Logan strongly disagrees. “I am very concerned about this issue of ‘weakening traffic’, trying to reprimand. Of course, nobody is against any action to repress trafficking. But it is necessary to talk about the ineffectiveness of prohibitionism
. No matter what you do, where there is demand, there will be supply. In North Korea, the Bible is banned, and even then the book is sold clandestinely. Perhaps the best solution is really the decriminalization of drugs.”

For Alcadipani, the fight against drug trafficking, or the so-called war on drugs, was won by the traffickers — who, despite all the repression, continue to control gigantic cartels and take illegal substances to the four corners of the world. But, according to him, “very harmful” drugs, such as crack, or cocaine itself, should not be legalized. Also, Brazilian society is very conservative, and it would be very difficult for that to happen anyway.

Logan, meanwhile, has a different view. He points out that, contrary to what many people think, legalizing is not synonymous with selling or distributing. Legalizing is, in effect, taking control of a substance out of the hands of drug traffickers and into the hands of the government.

In one of his videos — he has a YouTube channel on harm reduction — Logan discusses a possible model for legalizing crack cocaine based on Rolleston’s 1926 report. The document proposed that British doctors could prescribe regular doses of heroin to those who were drug dependent. Thus, the patient broke the link with drug trafficking and was inserted into the health system, with access to a multidisciplinary team composed of doctors, psychologists, social workers, among others.

“The reality is that the more you try to repress a substance, the greater the profit, and the greater the violence. Marijuana, for example, has several medicinal, therapeutic and related effects. But repression of marijuana kills. stray bullet even those who have never even tried marijuana. Crack follows the same logic”, he says.

“By banning and cracking down on crack, the only result will be people using a more harmful crack, individuals with addiction problems having contact with organized crime, the strengthening of organized crime, dealer shooting with the police and so on. . There’s no way for a business like that to work”, he adds.

It must be admitted, however, that even if a crack legalization model were proposed, considering Brazilian society, which is conservative in many aspects and with little access to information, it would be very difficult, if not impossible, to make this a feasible plan, according to Logan. Brazil is still a long way from even legalizing marijuana, which is currently allowed in several countries, including our neighbor, Uruguay.

Given the circumstances, Logan believes that the best way out is to invest in measures that will give dignity to the residents of Cracolândia, enabling them to have access to basic rights, such as housing, work and health, but also sports, leisure and culture – something similar to what tried to make Fernando Haddad through the program “De Braços Abertos”. According to the damage reducer, crack use is, yes, a problem — but, generally, it is not the drug that makes people live in Cracolândia, with no prospect of life
. “To think like that is to reverse logic.”

“If you sit down with a resident of Cracolândia and ask him why he is there, at first, he will say that crack has ruined his life, because that is the most socially accepted answer. he will discover that, behind this, there is a succession of tragedies that led him to that place. He will tell you something like: ‘I ran away from home when I was 10 years old because my stepfather was an alcoholic and beat my mother, I went to live on the street, I made a small robbery, I went to FEBEM [Fundação Estadual para o Bem-Estar do Menor], I left, I returned to the street again, I had contact with crack and here I am. In other words, crack is just one more element”, she says.

“Even if crack is removed from the residents of Cracolândia, the lives of these people are not improved at all. What are you putting in place? I think what Haddad did was interesting. First, you give dignity to that guy Housing, work, documents, education, health… and then thinking about the issue of crack. My only criticism of the program — very severe, by the way — is that there was little funding. It was possible to help between 200 and 250 people, of the approximately 4 thousand who inhabited Cracolândia at the time”, he adds.

In parallel to measures that give dignity to the residents of Cracolândia, another very important aspect with regard to efforts to try to end this social problem are strategies to cure or treat chemical dependence. Roughly speaking, there are basically two ways to do this: through involuntary hospitalization and through the so-called “free care”.

Involuntary hospitalization, as its name suggests, is the admission of a chemical dependent in a rehabilitation clinic without his consent. Since April, the City of São Paulo has involuntarily admitted more than 20 addicts from the Cracolândia region. The patients were taken to the Bela Vista Municipal Hospital, in the central region of the city, where they will remain for a maximum of 90 days.

“If the family members of a chemical dependent consider that he represents a risk to himself and to society, it is possible to request judicial authorization to commit him, even against his will”, says psychiatrist Ronaldo Laranjeira, PhD in Chemical Dependency.

“This measure is called compulsory hospitalization. It is worth mentioning that the measure can only be applied if there is a medical report that justifies it, with a description of the reasons”, he adds.

Logan, on the other hand, believes in caring in freedom. According to him, the strategy is the most effective to deal with the chemical dependency of those who do not want, or are unable, to seek treatment voluntarily. The measure consists of inserting the addict into health care, such as CAPS (Psychosocial Care Centers), for example. The objective is for the patient to make a controlled and safe use of the substance that causes his dependence.

In more developed countries, such as Germany, Australia, Canada, Denmark, Spain, Holland and Switzerland, there are even so-called “rooms for shoot
“, the “rooms for safe consumption of drugs with minimal risk”. In the places, chemical dependents use hard drugs, such as heroin and cocaine, under medical supervision. Equipment, including injection needles, are clean and offered free of charge by the shelters. .

“If a person uses drugs on the street, he runs away from the police, he runs away from a merchant, he creates confusion in the neighborhood… in these rooms, he is in a safe environment”, says Logan. “If one day she is there, using drugs and decides, on her own, that she wants to stop, she is already fully supported by an entire multidisciplinary team.”

“But now I ask you: what politician is going to make a room safe to use in Brazil? None”, says Logan. “The population is uninformed about drugs — and it’s in the interests of some groups that society remain that way, ignorant. The war on drugs makes a profit. And unfortunately, a lot of blood will still be shed.”