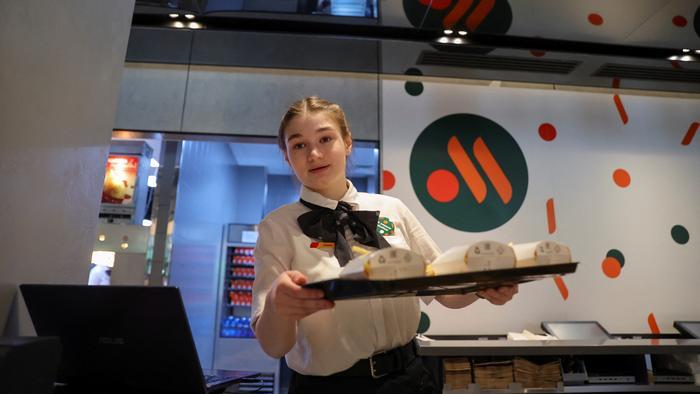 Restaurants will operate with a new name and logo, but in the same locations, with the same staff and almost identical dishes as the American fast-food chain, which left the country after 32 years due to the war in Ukraine.

The first restaurants of the chain that will replace McDonald’s in Russia opened their doors this Sunday (12/06) in Moscow under the slogan “the name changes, the love remains”.

The 15 restaurants will operate with a new name and logo, but in the same locations, with the same staff and dishes almost identical to those of the American fast-food chain. This Monday, another 50 restaurants of the new chain should open.

The new network is called “Vkousno i totchka”, which means “Delicious and full stop” in Portuguese. The network’s new logo features a red circle and two slanted orange dashes, representing a hamburger and two fries.

“We will try to do everything so that our customers do not notice any difference, both in terms of ambience and taste and quality”, assured the general director of the Russian fast-food chain, Oleg Paroïev.

“It won’t be worse, for sure. We will try to improve,” added the new owner, Russian businessman Alexandre Govor. “We hope that the number of customers will not decrease, but, on the contrary, that it will increase. Especially since it is now a 100% Russian company”, he emphasized.

As a result of Russia’s invasion of Ukraine, McDonald’s last month sold its restaurants to Govor. The American group had already decided to temporarily close its 847 cafeterias in Russia due to the invasion and later announced the end of its operations in the country after 32 years.

almost the same menu
In the new menu, almost the same variety as before, but with new names. The “Royal Deluxe”, for example, is now called “Grand Deluxe”, the “Filet-o-Fish” burger was changed to “Fish Burger”, and the “Double Royal” became “Double Grand”. Also, the prefix “McDo” no longer appears in any names. Furthermore, the fact that McDonald’s in Russia has previously sourced its products from local farmers should ensure that the sandwiches continue to taste similar.

“We were forced to remove certain products from the menu because they make direct reference to McDonald’s, such as McFlurry and Big Mac”, explained Oleg Paroïev.

He said prices “increased slightly” due to inflation that has hit Russia hard since new Western sanctions were imposed in the wake of the invasion.

Sergei, 15, on Sunday tested a new offering from a branch in central Moscow that was once McDonald’s flagship store.

“The taste remains the same. The soda is different, but the hamburger hasn’t really changed,” he said as he ate a chicken burger and fries.

Elena, programmer and mother of two, gathered the whole family for lunch in one of the restaurants of the new “Russian Mc Donald’s”, where since Sunday morning, well before the official opening, dozens of people were waiting in Pushkin Square.

the new owner
Alexandre Govor, who already operated 25 restaurants of the American group in Siberia since 2015, bought the activities of McDonald’s in May.

Co-founder of an oil refinery company, Neftekhimservice, the businessman agreed to keep the approximately 62,000 employees for at least two years, under conditions equivalent to those they had previously.

The 62-year-old businessman, from southern Siberia, says he has “very ambitious plans”.

“We want to reach the thousand stores in five or six years”, added the businessman.

The first McDonald’s, on Pushkin Square in central Moscow, opened two years before the collapse of the Soviet Union, and received more than 30,000 customers on opening day – a world record for the American brand.

The gigantic line in front of the store has become legendary and the restaurant, the most visited chain in the world: in 30 years, it received more than 140 million customers, the equivalent of almost the entire Russian population.

Russia, where McDonald’s directly managed more than 80% of the restaurants using its name, accounted for 9% of the company’s revenue and 3% of its operating profit.

McDonald’s had already temporarily closed its more than 800 stores in Russia in March, at the start of the Vladimir Putin regime’s war of aggression against Ukraine. It’s not the first time the network has made such a decision. In 2014, the company closed all its stores in Ukraine’s Crimea region after the peninsula was illegally annexed by Russia.

A Russian network called RusBurger ended up taking over the former US network points in Crimea. With the motto “Taste of Russia”, the chain began to offer products such as “X-Burger of the Czar” and “Chicken Czar” instead of the traditional Big Macs and McChickens.

This content is a work originally published by the German agency DW. The opinion expressed by the publication does not reflect or represent the opinion of Climatempo or its employees.

Previous AliExpress Super Deals: check out this Monday’s discounted products
Next Banned from the Oscars after slap, Will Smith should return to theaters in super-production sequel