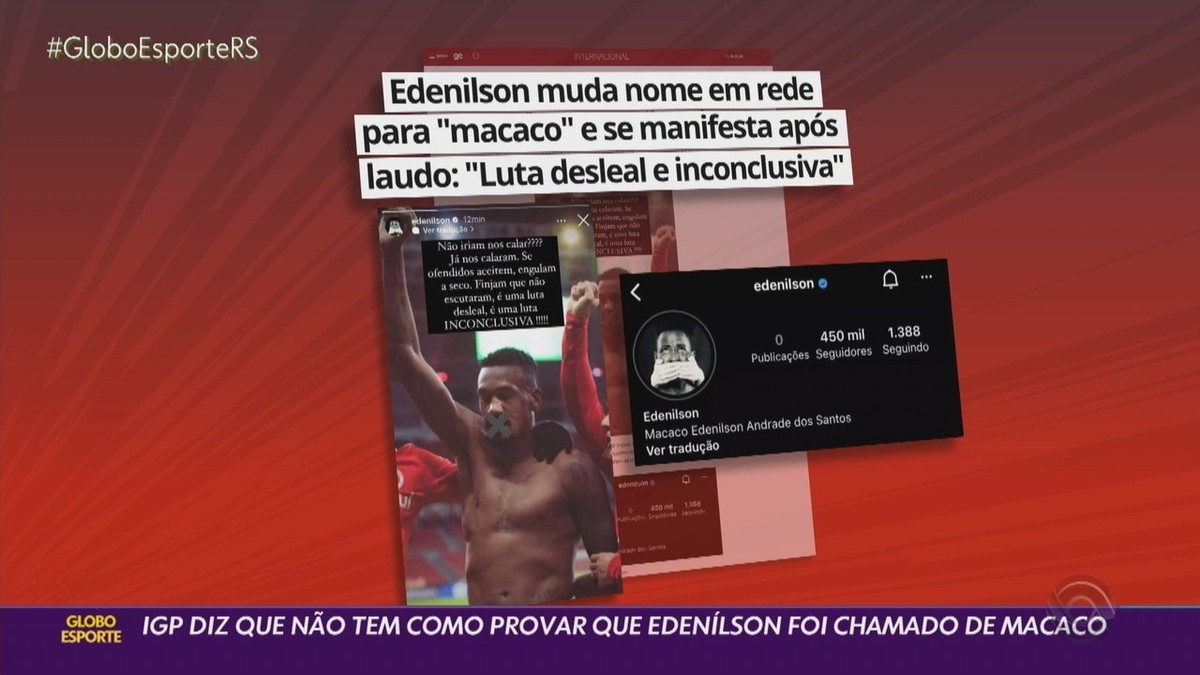 Deputy Roberto Sahagoff, head of the 2nd Civil Police Station in Porto Alegre, indicted Corinthians side Rafael Ramos for racial slur against Inter midfielder Edenilson. The inquiry was sent this Monday to the Public Prosecutor’s Office, which will decide whether to proceed in court.

– The case was concluded by me and forwarded to the Public Ministry. The prosecutor will decide whether to file a lawsuit, file or ask for some diligence – said Sahagoff to the ge.

Just last week, the delegate said that he would ask for the indictment of Rafael Ramos for considering that there were indications of the crime of racial slur, even after the report of the General Institute of Forensics (IGP) of Rio Grande do Sul concluded that it was not possible to identify what was said by the player after analyzing images of the match.

In response, lawyer Daniel Bialski, hired by Corinthians to defend Rafael Ramos, declared that he would take “legal measures” against what he called the “arbitrariness” of the police – the way in which the side was detained in Beira-Rio. also enters this position.

– If the delegate intends, against the exhaustive expert evidence, to indict Rafael, we will take the appropriate legal measures, either to prevent this, or to investigate the abuse of authority practiced. Arbitrariness will not be tolerated again,” declared Bialski.

On May 14, during Inter’s 2-2 draw with Corinthians, Edenilson accused the Timão player of calling him a “monkey” during a ball dispute on the sideline. After the game, Rafael Ramos was arrested in the act by the police for racial slur and released after posting bail of R$10,000.

A side of 40 pages was sent on Wednesday of last week by the General Institute of Forensics (IGP) of Rio Grande do Sul to the 2nd Police Station of Porto Alegre, responsible for the case.

According to a note released by the IGP, a video of the bid in question was analyzed by the experts, but it was not possible to identify what Rafael Ramos said because most of the gestures that make up his speech occur in the “inner portion of the oral cavity” .

The result of the expertise irritated Edenilson. On the same day of disclosure, the Colorado captain changed the name on his Instagram account to “Macaco”, deleted the posts on his profile and vented.

– Wouldn’t they shut us up? We’ve been silenced. If offended, accept, swallow dry. Pretend you didn’t hear, it’s an unfair fight, it’s an inconclusive fight – she published.

The case is also being investigated in the sports sphere. On different dates, Edenilson and Rafael Ramos gave statements at the Superior Court of Sports Justice (STJD) and maintained the versions presented previously.

The auditor-rapporteur of the case, Paulo Feuz, said that the investigation should be concluded in 35 days. The STJD will also request a court expertise for the production of evidence and rules out a confrontation (confrontation of versions) between the two players.